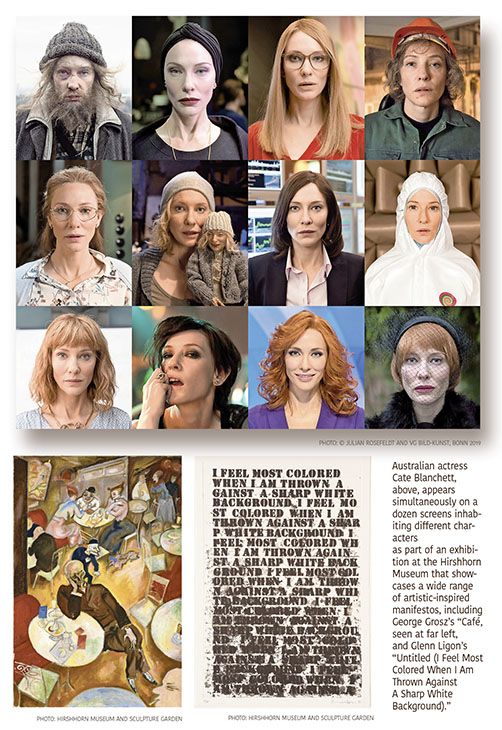 In a curving darkened room at the Hirshhorn Museum, Australian actress Cate Blanchett appears simultaneously on a dozen screens inhabiting different characters. A homeless man ranting through a megaphone, a puppeteer crafting a smaller version of herself, or a housewife having dinner with Blanchett’s own real-life husband and children.

For one minute in each story, the films all align as Blanchett stares straight ahead and recites excerpts from different artist manifestos in a strange robotic monotone voice. The effect is both otherworldly and unnerving, a cacophony of ideas about art from manifestos that range from pretentious to revolutionary to purely absurd.

The film installation called “Manifesto” by German artist and filmmaker Julian Rosefeldt is the centerpiece of “Manifesto: Art x Agency.” Organized by Hirshhorn chief curator Stéphane Aquin, the exhibition features more than 100 works of art and ephemera related to manifestos from art movements dating from the Manifesto of Futurism in 1909 and branching across Dadaism, Surrealism and other movements.

“Most manifestos are against established orders and promote a vision of what art should be about,” Aquin said. “Most of these manifestos were written by young men driven by an influx of testosterone who were having fun and wanted to change the world but also shock the bourgeois.”

The exhibition features work by famous artists, including Alexander Calder, Salvador Dalí and Jackson Pollock, along with work by lesser-known artists such as George Grosz, Barnett Newman and Tsuruko Yamazaki. A timeline at the beginning of the exhibition helps make chronological sense of the jumble of manifestos beginning with Futurism, which emphasized the power of machinery to reshape the world as cars and airplanes embodied speed and reckless danger in the early 20th century. Italian artist Giacomo Balla’s metallic “Sculptural Construction of Noise and Speed” features a geometric arrangement of sharply angled peaks with interlocking borders that resemble a topographical map of a futuristic world where mountains are carved from steel instead of earth.

The exhibition moves forward to Dadaism, which emerged in Switzerland after the devastation and nihilism of World War I, with artists rejecting nationalism and shocking the hoi polloi through work that was sensational, conceptual or not really considered art at all. That includes work such as the urinal that Marcel Duchamp called “Fountain,” a crucial pivot to the artist’s readymades — ordinary objects that Duchamp selected and modified, turning the found object into art — which would influence future artists such as Robert Rauschenberg.

The Hirshhorn’s collection of Dadaist work is sparse so the pieces on display are a pale version of the movement. In “Café,” German artist and WWI veteran George Grosz depicts a jumbled scene of disaffected café customers, but the painting lacks the satire and ferocity of his later work.

The exhibition also explores Surrealist and Abstract Expressionist work such as René Magritte’s “Delusions of Grandeur II,” a female nude that collapses into smaller sections like a fleshy ziggurat beneath a sky of shifting cubes, along with one of Jackson Pollock’s iconic splatter paintings. But the wall text is surprisingly short on quotes from the various manifestos. There is a brief summary of each art movement but there’s no real connection between the movement and the manifesto. Were the manifestos just empty words on paper or did they actually inspire the artists to create groundbreaking work?

Written mainly by white male artists in Europe or the United States, the manifestos reveal an inherent sense of privilege and pretentiousness with hyperbolic claims about changing the world. But some sought higher truths, like French poet André Breton’s 1924 “Manifesto of Surrealism,” which plumbs the symbolism of dreams and the depths of the subconscious examined by Sigmund Freud. “Can’t the dream also be used in solving the fundamental questions of life?” Breton wrote. 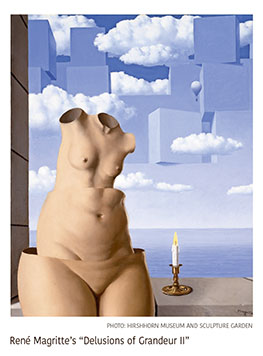 The “Manifesto” film installation breathes life into these dusty manifestos through cinematic scenes that both embrace and challenge the core elements of the manifestos that Blanchett recites in different scenes. Does anyone remember the Situationists? Probably not. Blanchett personifies their angry 1960 manifesto that railed against “the bureaucratization of art and all culture” while dressed as a scraggly homeless man roaming through abandoned streets and derelict buildings. In Rosefeldt’s film, the Situationist critique of society is reduced to the ramblings of a madman screaming through a megaphone at the wind.

The 12 screens are placed close together so the sounds of the films overlap, perhaps signifying that one manifesto bleeds into the next, providing a foundation that is either built upon or torn down. Laminated cards with the manifesto text are placed on benches in front of each screen, with some films ranging beyond visual art to manifestos in architecture, film, music and choreography.

Manifestos died out in the 1960s and ’70s but the exhibition continues with contemporary work by artists who critique society through different lenses, including the Guerrilla Girls’s lambasting of the sexist art world. But this section feels scattered and disjointed, as if it’s part of another exhibition that is still searching for a different theme. The exhibition would feel more cohesive if the contemporary work was excluded so there would be more breathing room for artwork from the art movements with manifestos from the early to mid 20th century.

In its current incarnation, the first half of the exhibition feels like a forced march through a blur of art movements. Ending the exhibition with the “Manifesto” film installation also would provide a stronger finale because Rosefeldt stands alone in exploring how these manifestos that have notched a place in art history still have relevance today.