During a career spanning more than 50 years, German artist Markus Lüpertz hasn’t pursued prevailing artistic trends, which may explain why he hasn’t been wholeheartedly embraced by a fickle art world known for chasing the latest wunderkind. 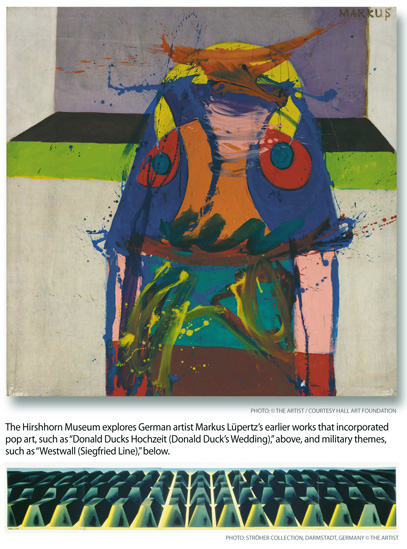 While Lüpertz is well known in Europe for his subdued paintings, his influence may expand in America now with two groundbreaking simultaneous solo exhibitions at the Hirshhorn Museum and the Phillips Collection, the first formal collaboration between the two museums and together the first major U.S. retrospective of his work.

“Obviously the visitors will come flooding in. I hope this will help for my own personal glory,” Lüpertz said wryly during a press preview of the exhibitions. “I am a little like Columbus [exploring the New World].”

At the Phillips, Lüpertz was the best-dressed man in the room, wearing a three-piece tweed suit with a matching hat, navy cravat and red handkerchief square. The 76-year-old artist leaned on a silver-topped cane while answering questions in German through an English interpreter. He said he was never interested in cranking out paintings in industrial fashion in an easily recognizable style or brand like Roy Lichtenstein.

“I don’t have a style. I only have an individual language,” he said. “On one hand, you have formidable painters who produce a product. Then you have other artists who rebel against that product. And for eternity, they are the better artists, I hope.”

Lüpertz’s work does express a distinct neoexpressionist style combining abstract and figurative forms in decidedly unfashionable paintings that are so subtle they border on the bland if you don’t look more closely. His work also has bridged different art movements, including pop art themes such as his Donald Duck paintings that were spurred by an obsession with the fresh visual language of comic strips.

In more than 30 paintings from the 1960s and ’70s, the Hirshhorn exhibition explores Lüpertz’s less-known earlier work, which broached military themes that were largely considered taboo in postwar Germany at the time, including large paintings in muted tones featuring German helmets and spades used to dig trenches. Born in 1941 in the midst of World War II, Lüpertz’s family moved from Bohemia (now the Czech Republic) to West Germany after the war, where he experienced a country grappling with its self-inflicted devastation and bloody history of Nazi atrocities. 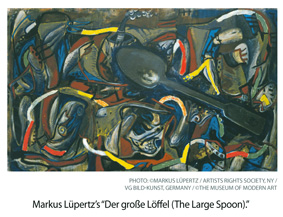 Lüpertz’s 1968 painting “Westwall (Siegfried Line)” stretches 40 feet across a gallery wall at the Hirshhorn, depicting orderly rows of green bunkers or “dragon’s teeth,” pyramids of concrete used to trap Allied tanks in Nazi defensive lines along the Westwall. The network of more than 18,000 defensive fortifications still couldn’t stop the advance of American troops despite thousands of casualties on both sides. In Lüpertz’s painting, the bunkers have become a grid of identical geometric forms on a field of yellow that doesn’t feel menacing until one considers their origin. The giant scale of the work also conveys the massive undertaking involved in transforming an entire country into a ravenous war machine.

The Phillips exhibition spans Lüpertz’s artistic career, with some works placed together in an innovative fashion rather than a straightforward chronology. “The Large Spoon,” on loan from the Museum of Modern Art, is sandwiched between two other paintings to create a triptych of swirling abstract forms surrounding a giant grey spoon. The work defies easy interpretation, but it conveys a sense of tension between the straight metallic lines of the spoon swimming in a chaotic sea of organic shapes. 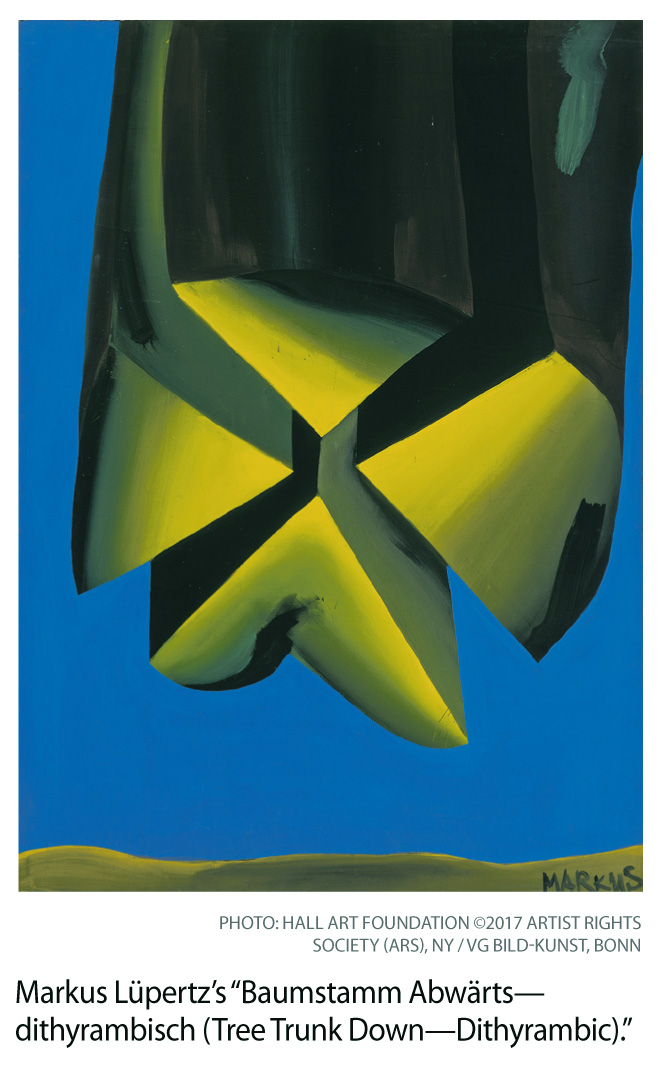 Gallerist Michael Werner, who represents Lüpertz, suggested the joint exhibitions after he donated 46 pieces by postwar German artists to the Phillips Collection, including work by Lüpertz, Georg Baselitz and A.R. Penck. Phillips Director Dorothy Kosinski, who curated the exhibition with input from Lüpertz, blamed “art politics” for the lack of appreciation of his “paintings that grip you by the throat.”

Since painters have been using essentially the same tools for centuries, the focus now is on the uniqueness of ideas rather than technique, Lüpertz said. “It’s a question of faith, of belief. People need to believe,” he said. “In art, it is so much more beautiful to believe than to know.”

Lüpertz, who has five children from two marriages, hadn’t seen some of the paintings in the two exhibitions for many years because they are owned by private collectors or museums around the world. He believes his work still has merit, and some paintings he created decades ago could have been painted yesterday. “With every painting, I have to learn again how to make that painting,” he said. “I want to paint a Mona Lisa every day.”

The public and art historians must interpret the meaning of his paintings for themselves, but Lüpertz hopes his work endures long after he is gone.

“There’s no death in painting,” he said. “I hope to be able to take that little bit of eternal life with me.”

Brendan L. Smith (www.brendanlsmith.com) is a contributing writer for The Washington Diplomat and a mixed-media artist (www.dcmixedmedia.com) in Washington, D.C.