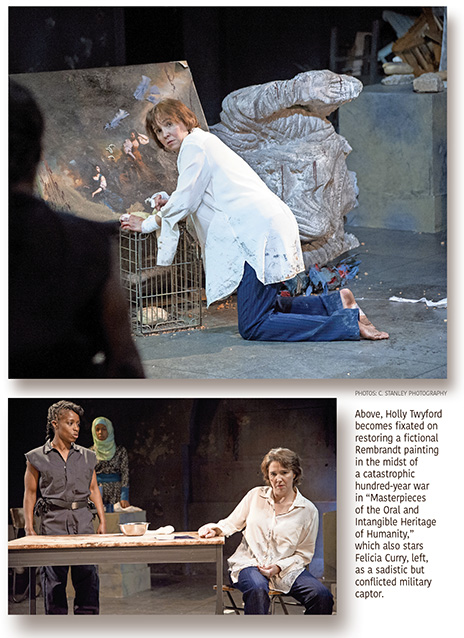 For those brave at heart and with a penchant for the compelling and morose, Signature’s premiere of “Masterpieces of the Oral and Intangible Heritage of Humanity” might be for you.

“Masterpieces,” penned by D.C. playwright Heather McDonald and directed by Nadia Tass, showcases a dystopian society in the midst of a catastrophic hundred-year war in an unnamed country. The scene takes place inside a demolished museum being used to torture and jail prisoners, and where, ironically, characters become fixated on restoring a fictional Rembrandt painting.

The reason? For even when crushed with hopelessness, there is a human need to survive and savor some sense of beauty, the script expounds.

“Masterpieces” marks Signature’s second production as part of the Heidi Thomas Writer’s Initiative, named after the British playwright and screenwriter behind the popular BBC series “Call the Midwife.” Through a grant from the Jenna and Paul Segal Foundation, Broadway producer Jenna Segal will sponsor a world premiere by a female playwright with a female director for the next five years.

The intensity behind “Masterpieces” never lets up, as we witness and empathize with three women trying to cope with dire circumstances. To ensure buy-in, there is even audience participation during this 90-minute saga with no intermission, so there’s literally no break as we are made to commiserate with the characters’ reality.

The play starts out innocently and calmly enough as Layla, the art restorer (played by Holly Twyford), gives us some academic background on the situation, showing slides of great masterpieces and asking the audience to write down on a slip of paper (given out by ushers on entry) the one thing we would save from a burning house. What would be our masterpiece worth preserving? After collecting the paper, but before she has a chance to read our responses, Layla is brutally whisked away by her military captor, Mitra (played by Felicia Curry). From there, the plot trajectory follows the power play and exchange between the two and a third woman, Nadia, designated as Layla’s nurse (played by Yesenia Iglesias).

Each of the women characters is alternately emotionally and physically strong and yet vulnerable, which makes rooting for one’s survival over the other complicated. The role of victim here is a loosely moving concept. As the play progresses, the characters’ relationships alter as the power dynamics change, exposing different sides to their personalities. A constant reminder of the characters’ multiple personas is when Mitra, while donning military garb and weapons — and in between sessions of torturing Layla — constantly implores her victim to “illuminate” her with her knowledge and understanding of art, culture and facts about her personal life choices.

By the end, “the three women all find common shreds of humanity as they try to save a small symbol of beauty in their broken world,” says Signature’s dramaturg.

The three women give over 100 percent to their roles, making us feel a gamut of emotions — from terror and disgust during the torture and fight segments to sorrow and sympathy when they plead for escape or relief from agony. We even, at times, identify with them when they reveal inner pain and struggles.

In this play, the scenery and lighting are overpowering.

Set designer James Kronzer had his work cut out for him. The stage is nothing short of unorganized chaos to the point where it resembles an environmental hazard. The museum has been hit, one can assume, by some type of weaponry that has crushed and smashed any remaining art pieces. An ancient dismantled statue lays on its side, boulders and trash cover the floors, feathers from mourning doves caught in a collision float in the air, and the ceiling drips from a leak somewhere above. To prevent being dripped upon, ushers hold large umbrellas as they show you to your seat.

One of the themes of the play is that of light. Thus, the lighting, by Sherrice Mojgani, is more than a design; it’s a metaphor for the characters’ plight and state of mind. Throughout the play, images of civilizations filled with works of art are projected in a steady stream onto the back wall as a reminder of the high price the characters are paying for their manmade war on progress.

The term “chiaroscuro” — when a painting is full of deliberately strong, bold contrasts between light and dark — is repeatedly mentioned when speaking of the Rembrandt painting that Layla calls “The Two Marys,” illustrating pre-dawn dimness before two of Jesus’s followers are aware of the Resurrection. Also mentioned is “light that lives in darkness,” which is synonymous with what these three women are ultimately striving for.

If your world came crashing down around you, would there be something worth saving? What would you risk to save it? These are the questions that “Masterpieces” poses. You might not have all the answers by play’s end, but you’ll know that the answers are windows into our cultural heritage and identity.

Masterpieces of the Oral and Intangible Heritage of Humanity