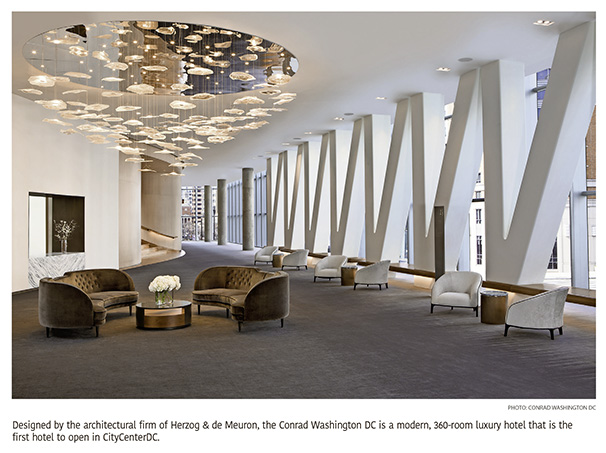 The growth in the hotel industry here reflects this evolution. The number of hotel rooms in the metropolitan region at the end of 2018 was 114,923, an increase of 13,686 in the past decade, according to Lodging Econometrics. That expansion is set to continue. Destination DC notes that the city has 18 hotels and nearly 4,000 additional rooms in the pipeline. They run the gamut from boutique properties to mammoth structures with convention centers.

For instance, the Yotel is coming to 415 New Jersey Ave., NW, currently the site of the Liaison Capitol Hill, and will have small rooms it calls cabins averaging 180 square feet. This trend toward more budget-friendly, smaller but still swanky rooms can also be seen at properties such as the Pod DC Hotel in Penn Quarter and the recently opened Moxy, which features 200 “petite” rooms for budget-minded millennials.

As new properties make homes here, legacy buildings are revamping themselves to find that perfect marriage of traditional and modern. We looked at two of each to survey the latest in D.C.’s ever-changing hotel scene.

With a grand opening on April 9, this 360-room luxury hotel under the Hilton Hotels and Resorts brand is the first hotel to open in CityCenterDC. The architectural firm that designed it — Herzog & de Meuron — is no stranger to buildings that stand out, having designed the Tate Modern museum in London and the Bird’s Nest, or Beijing National Stadium. The hotel is a breath of modern air amid Washington’s more classical cityscape, but still pays homage to its home.

“If you look at the building itself, it’s designed after the actual grid structure of D.C., so incorporating the kind of north/south/east/west grids but then also the crisscrossing avenues that we have,” said Katharine Zike, marketing manager at the Conrad. “It’s really unlike any other luxury hotel in D.C. in that it does take on the aesthetic and modern approach to luxury, whereas I think some of the more beautiful hotels — the Willard, the Ritz, the St. Regis — are stunning, but they all have sort of a traditional, classical luxury feel.”

The first floor will boast 30,000 square feet of retail shopping, including the mid-Atlantic region’s flagship Tiffany’s jewelry store. The second floor houses 32,000 square feet of meeting space and ballrooms with floor-to-ceiling windows, and the hotel’s lobby, lounge and restaurant sit on the third floor. That’s also where the intersecting diagonals begin, Zike said, creating triangular spaces for more intimate settings, including one off the restaurant, Estuary by “Top Chef” contestants Bryan and Michael Voltaggio.

It’s also where guests will find the hotel’s massive atrium, which climbs from the third floor to the roof. It’s shaped to represent Switzerland, where the architects are based. Extending from the ceiling to the fourth floor is a 92-foot metal mesh curtain, and as sunlight shines through 22 skylights in the atrium ceiling, it creates a shimmer on the mesh, Zike said.

Additionally, the Midnight Pendant, a sphere 14 feet in diameter, hangs from the ceiling 52 feet down, and its light changes from white to amber in accordance with the circadian rhythm.

There are 32 suites in the hotel. The presidential suite has a dining area for 10, a gas fireplace, a marble bathroom and a SHADD piano made by Warren Shadd, a D.C. native and the first African American piano maker. His pianos also reside at the Vatican and in the Obamas’ home. 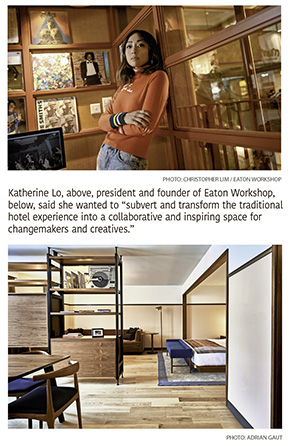 Guests who stay on the 10th-floor Sakura Club level get access to what Zike calls a “hotel within a hotel.” In addition to amenities specific to the club such as a bath butler, the club is open 24 hours and has a private chef who prepares five meals a day, including a traditional afternoon tea and a Japanese and craft whiskey tasting in the evenings. Through a program called Culinary Diplomacy, the chef will feature cuisine from a different country daily.

A rooftop bar called the Summit caps off the hotel. Open to the public as of April 9, it has views of the Capitol and Washington Monument.

At first blush, the Eaton seems to have an identity crisis, combining a hotel, shared work space and wellness center into one location. But a closer look reveals just how intentional those elements are to the brand that Katherine Lo is developing.

“I’ve been passionate about creating a positive impact in the world for much of my life, so when I set out to create Eaton Workshop, I did so with the strong desire to subvert and transform the traditional hotel experience into a collaborative and inspiring space for changemakers and creatives,” said Lo, president and founder of Eaton Workshop. “And through my own personal background in activism and passion for the arts, I knew I wanted to create something entirely new in the hospitality realm that would stand out in D.C.”

What Lo has also done is open a brand that merges hospitality with the arts, activism and “progressive social change.” It’s an aptly Washingtonian approach that stands in stark contrast to the Trump International Hotel just a few blocks down, where “progressive” is not a word you’ll hear very often among the chandelier-and-marble-filled lobby of Trump’s namesake in the nation’s capital.

Open since last fall, Eaton boasts 209 rooms that include 22 junior suites and six artist studio rooms, plus 15,000 square feet of meeting and event space. The largest room, the Residence Junior Suite, has a dining area to seat up to six people, a Himalayan salt lamp and a floor-to-ceiling window.

Lo and her team handpicked each feature and amenity, selecting all-natural mattresses, glasses made of recycled glass and bath amenities from Grown Alchemist that are made with organic ingredients. Suites have record players and a selection of albums, plus bookshelves with literature on the environment, wellness, activism, race, gender, art, design and architecture — topics near and dear to Lo. Additionally, guests can request myriad complimentary products including natural hair care products and breast milk storage bags — reflections of Lo’s commitment to inclusivity.

“Eaton DC is an inclusive gathering place that I hope appeals to a wide and diverse range of guests, particularly those who are striving to make the world a better place and care deeply about important topics including the environment, race, gender equity, LGBTQ rights and so forth,” said Lo, whose father is executive chairman of the Hong Kong-based Langham Hospitality Group. “For centuries, this city has been at the frontline of many of the world’s most important counterculture movements, and it feels even more symbolic and historically significant given our current moment in history. I hope that Eaton DC follows in the footsteps of those people and movements who fought to make the world a better, more just place.”

In addition to Lo’s philosophy, the hotel’s Wellness Center helps Eaton stand out in the crowded D.C. marketplace. Forget treadmills and free weights. Here, you can use the 266-square-foot meditation room, a 1,007-square-foot yoga space, two infrared saunas and a private holistic treatment room, where guests can sign up for Reiki or crystal healing and chakra clearing. Classes, which cost $20 apiece, include sunrise and power yoga, but also Yoga Nidra Sound Bath, a 75-minute class that combines meditation and sound “giving your body and mind access to deeper states of relaxation and wellbeing,” according to the website.

“To me, fitness requires a holistic approach, because while it’s important to maintain a physical health, I believe we must also focus on the health of our mind and spirit,” Lo said. 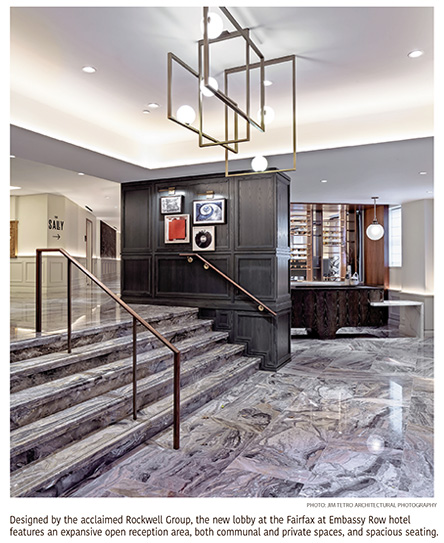 The other half of Eaton Workshop is Eaton House, a co-working space open to 370 members and self-proclaimed “home for today’s counterculture movement.” Costs to join range from $400 to $4,500 per month.

This year, Lo will launch Eaton Media, the brand’s global multimedia platform. Already available are weekly vinyl listening and storytelling sessions, and a monthly series called “My Friend Wrote This Book,” which is “our take on the traditional book talk, putting authors in conversation with their friends to share personal experiences in the world of writing and publishing,” Lo said.

“There’s nothing quite like Eaton DC here in D.C., and it’s clear to me that there is a strong desire for intellectual conversations touching on today’s most pressing issues in an environment that’s also engaging and enjoyable,” she added.

The hotel dates to 1920, but its look no longer does. The Fairfax at Embassy Row underwent a nearly yearlong renovation of its lobby space last year, officially unveiling its $10 million makeover in December 2018.

Designed by the acclaimed Rockwell Group, the new lobby features an expansive open reception area, both communal and private spaces, and spacious seating with low tables and a sculptural sofa. The goal, according to the hotel, is to create an elegant but inviting ambience that reflects a sense of place and community.

“The whole lobby area has really been reimagined,” general manager David Hendrix said. “The Fairfax has always been a classic hotel, but being that it was built in the 1920s, the lobby area was really an afterthought at that point. We had a very small space. There wasn’t a lot of space for guest interaction, and the plan was that this would really open the space up and create a day/night atmosphere where you’ve got work during the day and the furniture converts to play at night. You’ve got a pool table that also doubles as a banquet table. You’ve got a ping-pong table that’s used for breakfast setups.” 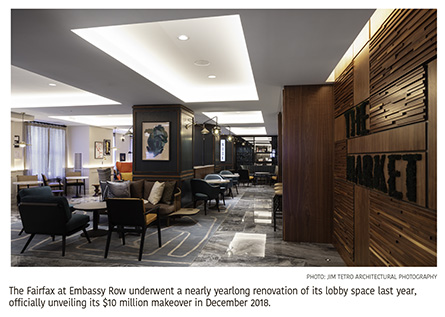 Besides opening the lobby space and adding seating, the Fairfax also relocated its restaurant from the back to the front and added a seasonal outdoor patio. The new eatery, The Sally, offers high-end cocktails and liquors, plus small plates with locally sourced products that will change with the seasons. Named for a member of the prominent 18th-century Fairfax family, this stylish dining venue features a marble bar with zinc accents, dark wood floors and an eclectic mix of modern and vintage furniture. There’s also a new market café for grab-and-go bites and drinks.

The changes make it more inviting for guests and passersby alike to stop in for an after-work drink or dinner, Hendrix said. The trick was making the modernization work with the hotel’s historic character. To that end, the hotel’s 259 rooms are still traditionally appointed with high ceilings and crown molding.

“I think we still have a nice combination that our guests seem to enjoy,” Hendrix said.

Part of the Irish family-owned Doyle Collection, this hotel is undergoing a multi-million-dollar renovation that will revamp its restaurant, lobby and rooftop — and add a chocolate and coffee shop. The goal is to make the hotel “the most sought-after social scene in Washington, D.C.,” according to a presentation shared with The Washington Diplomat. 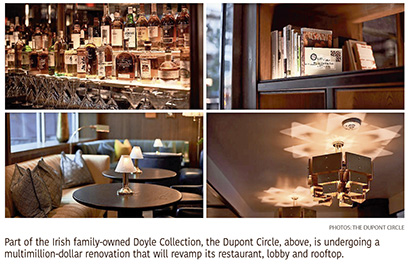 For years, the hotel was a popular gathering spot given its location directly overlooking Dupont Circle. But the renovation has transformed the lobby bar area and lounge into a sleek but inviting space (complete with an indoor fireplace for the winter and an expansive outdoor terrace for the spring and summer) punctuated by warm woods, mid-century modern artwork and striking sculptures.

The rooftop will have 14 suites, including a 3,500-square-foot penthouse with a fireplace and heated garden terrace with views of the Washington Monument.

Bar Dupont will henceforth be known as the Doyle, a “club-like bar with a mid-century feel” that will serve cocktails inspired by the 1950s and ’60s.