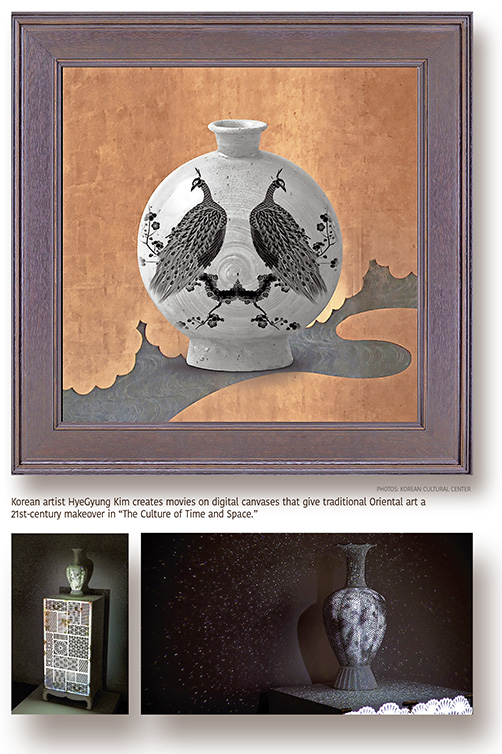 The Korean Cultural Center has carved out a niche for itself with exhibitions that explore cross-cultural identity and the interplay between the modern and the traditional. While the shows usually focus on Korean or Korean-born artists, their messages have universal resonance in a fast-changing, globalized world.

The center continues this exploration of the past, present and future with its latest exhibition, “The Culture of Time and Space,” which uses digital media works by artist HyeGyung Kim that reflect on the convergence of traditional Korean beauty and contemporary technology — and the artistic possibilities when the two are fused.

“I felt that, ironically, many young Koreans these days are quite familiar with Western art, history or culture, while showing less interest to our own East Asian traditions,” said Kim, who is also an author and design teacher in South Korea.

To bridge this gap, Kim blends the old with the new to give Koreans a greater appreciation for their own history and culture. And her innovative techniques are a natural fit for today’s tech-savvy youth.

In Kim’s work, digital media and Taoism intersect with traditional Oriental art, specifically East Asian antiques, to create an interactive experience that connects traditional Korean aesthetics with modern-day innovation. She plays with techniques such as light, sound, movement, mapping and projection to breathe new life into Korean crafts such as porcelain and antique wooden furniture.

“I hope the exhibit gives the audience an interesting opportunity to meet Korean ancient arts combined with dynamic new media,” she said.

The results are moving pieces of art — literally. In a pair of pieces, “Omaju, A Treasure” and “Omaju, Joyful,” she starts off with the blank canvas of a plain gray vase. But soon the canvas becomes a virtual one, as different patterns are projected onto the vase, creating an array of decorations that blend and fade into one another.

One moment we see a mesmerizing pattern of fans, blinking lights and sweeping brushstrokes of white, while in the next moment we see meticulously designed flowers and peacocks. Except these peacocks, which for an instant appear static, as if they were simply painted onto the vase, ever-so slightly tilt their heads and move their beaks while their plume of feathers undulates in the wind, reminding us that we’re actually looking at a digitally manipulated piece of art.

In another signature piece, “Media, A Treasure,” a vase sits atop an ordinary-looking vertical chest. But soon, beautifully lit projections appear on the façade as the vase on top glitters and sparkles. Again, we see similar patterns — the twitching peacock, the pulsating blossoms, along with an intricate latticework of shapes and lines that are drawn right before our eyes and mimic traditional Korean metalwork.

The results are a juxtaposition of ancient art and new technology, and how the latter can transform the former. The digital designs enhance the antiques, while simultaneously preserving the original artistry that went into making them.

By focusing on the vibrancy of Korea’s past and the vitality of its future, Kim ultimately hopes to begin an artistic dialogue that she says transcends space and time.

“I think the easiest way to communicate with my audience is using the visibility,” Kim told us. “I try to express the visibility in the form of media art that deliver auspicious patterns and ancient art stories.”

The exhibition is the latest in a string of shows that directly engage the viewer and examine traditional artwork through a modern-day lens. The 2019 opening exhibit, for instance, showcased vibrant textile works based on the traditional Korean wrapping cloth known as bojagi, but reimagined the cloth using contemporary techniques, aesthetics and social commentary.

Other exhibitions touch on universal topics, such as “City, Unfamiliar Landscape,” which explored the evolving nature of urban spaces, as well as “Inner Monologue,” a rumination on the challenges of immigrating to a new country and learning to speak a foreign language.

Cross-cultural dialogue is a primary mission of the Korean Cultural Center, which often spotlights the connections between South Korea and the United States, as seen in a recent show commemorating International Women’s Day that featured 45 Korean American artists who reflected on their experiences as immigrant women in the U.S.

To further that mission, the center closed last year for a major renovation, which it debuted in September (also see “Renovated Korean Cultural Center Aims to Serve as Bridge Between East and West” in the Diplomatic Pouch). The renovation created lit and shadowed spaces intended to evoke the experience of walking through a traditional single-story Korean house called a hanok. The goal was to design a welcoming environment for American visitors to experience Korean art and, as architect Jennifer Lee said at the debut, create “a window to the cultural experience of Koreans that can now be experienced by everybody.”