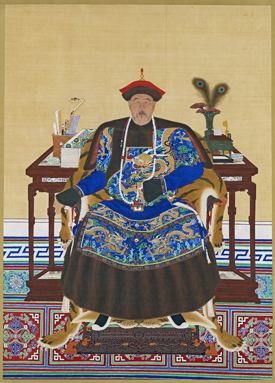 “Portrait of an Unidentified Courtier in front of a Table” is among 16 portraits at the Sackler Gallery that offer a glimpse inside the lavish court of the Qing dynasty during China’s golden age of prosperity.

If his lavish robes, trimmed with tiger fur and featuring an intricate dragon pattern, did not make the point clearly enough, the man’s no-nonsense gaze would remove any doubt as to his high status in the Qing dynasty court of 18th-century China.

The identity of the nobleman, depicted on a hanging silk scroll in ink and color, is unknown. But the mystery surrounding the courtier, with his aristocratic accouterments, only adds to the portrait’s allure. Viewing it, you gain a sense of the cultural milieu and upper-class lifestyle of the Chinese golden age of prosperity, or shengshi, of 300 years ago.

During its zenith in the late 17th century and throughout the 18th century, the Qing dynasty, which ruled China from 1644 to 1912, presided over a dramatic increase in population and territory. This impressive growth contributed to expanded wealth and a cultural flourishing, including the development of a distinctive style of portraiture, as seen in the painting of our tiger fur-laden nobleman.

Visitors have until January 2013 to take in the portrait of an “Unidentified Courtier in Front of a Table,” as well as 15 additional paintings of members of the Qing dynasty, related by blood or marriage, currently on display at the Smithsonian’s Arthur M. Sackler Gallery. The exhibition, “Family Matters: Portraits from the Qing Court,” draws on the Sackler’s extensive collection of such portraits — some of which are nearly life-size — that were collected by Richard G. Pritzlaff, a New Mexican rancher in the late 1930s and 1940s, and acquired by the museum in 1991.

While the majority of the portraits depict their subjects in a similar manner — a head-on, flattened perspective, with emphasis on the elaborate robes and carpets — the women are generally depicted adorned with dazzling jewelry made of gold and pearls or inlaid with turquoise kingfisher feathers, while the men are seen riding horses, relaxing in a garden, meditating quietly with rosary beads, or seated in a formal setting among their favorite possessions.

The exhibition’s introductory panel informs us of a divergence in purpose between the male and female paintings. Whereas most of the portraits of Qing women were painted to facilitate the practice of ancestor worship, the portraits of men featured in this show were painted from life and had other purposes, both formal and informal.

The origins and purpose of the striking “Portrait of the Qianlong Emperor in front of the White Pagoda,” a large ink and color on silk painting that greets visitors entering the exhibition, for example, are shrouded in mystery.

Though the face of the man crossing the elegant white “Gold Tortoise Jade Rainbow Bridge” on horseback in the imperial park west of the Forbidden City resembles that of the Qianlong Emperor (1735-96), fake seals call into question its supposed origins in the imperial court. The emperor’s relaxed pose, and the lack of a substantial entourage, likewise cast doubt on its provenance.

One possible explanation for these peculiarities is that the painting may have been created to help shape the image of the emperor to suit his tastes. The Western watch hanging from his belt, reflecting his penchant for such timepieces, and the white pagoda in the background, representing his Tibetan leanings, may have helped tailor his persona within the court.

Another standout portrait, the first on the left as one enters the exhibition room, features a richly dressed woman with a possibly spurious identification. The “Beauty Holding an Orchid” includes a title slip in English indicating that she is Lady Liu, concubine to the Yongzheng Emperor, father of the Qianlong Emperor. But a lack of clear-cut clues from her headdress, robes and jewelry, however elaborate, remove all certainty concerning the portrait’s courtly origin. The piercing eye contact and other signs, sexually suggestive in their time, point to its potential use in the pleasure quarters of the city. 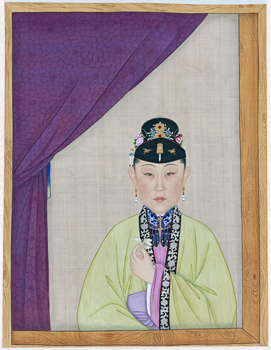 In addition to the 16 portraits, the Sackler exhibition includes several decorative objects similar to those portrayed in the paintings. An imperial noblewoman’s summer surcoat, worn to add formality to noble vestments, features a five-clawed dragon, indicating its wearer to be of the highest rank. The exquisite detail of three headdress ornaments in the shape of a moth, phoenix and caterpillar turning into a butterfly incorporate brilliant blue kingfisher feathers, then a sought-after ornamentation. Seeing these stunningly beautiful articles helps one envision the Qing court in all its regal glory.

Though most of the portraits in the exhibition conform to the rather rigid formula of courtly painting, a handful departs from this practice, revealing another aspect of contemporary art and culture. The painting of “Yinxiang, Prince Yi (1686-1730), Enjoying an Outing by Boat,” for example, shows the prince gently drifting on a pond in the summertime, raising an orchid as two attendants hold his hat and a book and writing brush at the ready. The painting of “Hongyan, Prince Guo (1733-1765), Reading in a Spring Garden,” similarly depicts the lifestyle of the idealized gentleman-scholar of the day.

“Family Matters” serves as a tantalizing introduction to the Qing court. Four of the portraits here and most of the objects have never before been publicly shown, while the remaining 12 portraits have not been on display for over a decade. This fact, combined with the ability of the portraits to shed light on the still-influential shengshi period in Chinese history, provides a compelling case for a late summer trip to the Sackler.