Home The Washington Diplomat May 2013 In Renaissance Times, English, Irish Fed Off, and Fought, Each Other 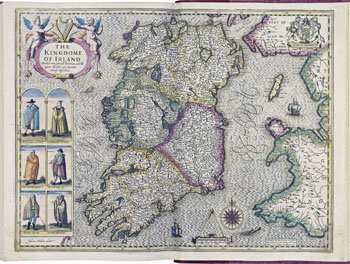 Maps, such as the one above by English cartographer and historian John Speed are among the items in a Folger exhibition that document the deep connections between Ireland and England during the Renaissance.

Most people, when they think about the Irish, think they know the Irish. The troubles and the famine, George Bernard Shaw, and Samuel Beckett, Catholics and Protestants and the chasm between them, the sound of a fiddle and the smooth pour of a Guinness — all the clichés that crop up around St. Patrick’s Day.

But if you go to the Folger Shakespeare Library, you might find a few laddies — and lords — you didn’t know who shed light on the complex Anglo-Irish relationship in “Nobility and Newcomers in Renaissance Ireland.”

The exhibit explores the push-pull dynamics between Ireland and England during the time of Queen Elizabeth I, Shakespeare and James I, when the English reigned supreme but the Irish were autonomous — and wanted to keep it that way.

It was a time of cultural reciprocity that influenced both sides’ literature, architecture and arts, but also a time of political competition that planted the seeds of the later troubles in the 19th and 20th centuries.

The exhibit is peppered with the people who shaped the era: English (and Irish) lords and masters, aristocrats, rebels and power seekers who jockeyed for a piece of the Emerald Isle, which centuries ago was a kingdom rife with many factions. The Folger breaks down these personalities into three groups that vied for dominance: the native islanders who were largely Catholic and spoke the native Gaelic tongue; “Old English” descendents who traced their ancestry back to the 12th-century Anglo-Norman conquerors of Ireland; and new Protestant settlers from England and elsewhere, mostly Protestants, who took over large swaths of land and were sent to rule the increasingly incalcitrant locals.

Powerful families and landowners came and went, rose and fell, including Thomas Butler, the 10th Earl of Ormond, and later Edmund Spenser, the great English poet, who were all ruling earls in Ireland until their family connections faded.

“Ireland was like Cuba in the Cold War, a tinderbox with charismatic and disgruntled leaders with sharp ideological differences with their ‘mainland’ government [i.e. Protestant England], and highly vulnerable to outside influence and invasion by larger, Catholic powers on the continent, who were themselves at war with England,” explained curator Thomas Herron. “Simultaneously, Ireland had nominally been ruled by England for 400 years by the 1580s, so the familial, cultural and trade links were all firmly in place.” 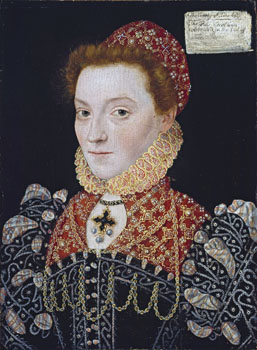 Portraits of nobles include
“The Fair Geraldine

Ireland was hardly a backwater, but very much a European entity, as much as a Gaelic one. Prominent Irish figures were welcome at European courts, including English ones. They bought property in London, while English settlers looked for opportunities in Ireland. Despite this cultural osmosis, land drove an enduring wedge between the two nations. Religion may have reared its head in Renaissance Ireland, but it was often land that drew the battle lines, as English lords and families sought to carve out estates or rule in Ireland.

Walking through this exhibition, you can get lost in the complexities of the competitive strife and the myriad cultural influences. The Irish tongue back then was not just a spoken language but a golden written language; Queen Elizabeth I, in fact, was given an Irish primer with Gaelic phrases that were specifically created for her.

Issues of autonomy arose during Queen Elizabeth’s time, including a ruinous — for both parties— Nine Years’ War between Irish Gaelic chieftains and the English. The queen dispatched Robert Devereux, the second earl of Essex, to put down one uprising, but he failed, which eventually led to his ill-planned and ill-advised plot against the queen, costing him his life.

This is, as is often the case at the Folger Shakespeare Library, an exhibition about books, letters, diaries, dictionaries and paperwork, as well as portraits of key figures. Even Shakespeare pops up — you can find references to the festering Irish wars in “Henry V” and “Henry VI,” which hopes for a conclusion to the struggles.

Today, Ireland is promoting a tourism campaign called “The Gathering” to entice travelers with Irish roots to visit the country. But with a lot less legwork, a trek over to the Folger reveals a side of Ireland that most people rarely see — one with a nuanced, complex history that had a profound effect on the Ireland we think we know today.

Nobility and Newcomers in Renaissance Ireland