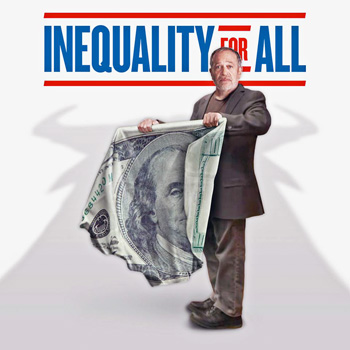 Also See: ‘The Trials of Muhammad Ali’ and ‘You Will Be My Son’ and Repertory Notes

Professor Robert Reich talks about the growing gap between the haves and have-nots in Jacob Kornbluth’s documentary “Inequality for All.”

Closing the newly rebranded AFI Docs film festival on June 23, American director Jacob Kornbluth’s “Inequality for All” made its eagerly anticipated East Coast premiere at the National Museum of American History on the National Mall, spitting distance from the traditional American centers of policymaking at the White House and on Capitol Hill. Following the screening, Karen Tumulty, national political correspondent for the Washington Post, led a special discussion with Kornbluth and film subject Robert Reich, former secretary of labor in the Clinton administration and a professor at the University of California at Berkeley.

Much more so than “An Inconvenient Truth,” Davis Guggenheim’s stilted Oscar-winning climate change documentary starring former Vice President Al Gore, “Inequality for All” succeeds as an entertaining and educational documentary largely because of Reich’s outsize charisma, likable personality, humble sense of humor and oratory prowess. When skillfully explaining the complex topics surrounding income inequality in a straightforward fashion, he demonstrates why he has been so popular at the universities where he has taught for three decades. His persuasive talking points are buttressed by enlightening graphics that bring statistics to life, explications of other expert commentators, contemporary video fleshing out the lives of modern Americans, and historical film footage.

Rising income inequality has become a topic of the moment, particularly after the financial crisis of 2008 and the subsequent Occupy Wall Street and related movements. Reich posits that income equality is at a historic high in the United States, posing a threat to the stability of the economy as well as the democratic system. Today, the top 1 percent of Americans, ranked by income, earns over a fifth of all U.S. income — triple 1970s level. Just 400 of the wealthiest Americans have a net worth equivalent to that of 150 million Americans. One cause for the widening gap between rich and poor has been big tax cuts for the wealthy over the past decades: The current highest marginal federal tax rate is 39.6 percent compared to 91 percent when Dwight D. Eisenhower was president (1953-61).

Proponents of supply-side economics claim that the gains of the upper class will trickle down the economic ladder, but Reich argues that this has not happened. In a trend propelled by automation and globalization, the well-paying jobs required to build a strong middle class have been largely downsized — or outsourced — rather than created in the United States, weakening the collective spending power of American consumers required to sustainably drive the U.S. (and global) economy. The resulting economic disparity has hit dwindling communities — often in the Rust Belt — that are mere shells of their former proud selves, local and state governments struggling to balance the books, and increasing signs of class warfare permeating the U.S. sociopolitical order.

All three of Kornbluth’s feature films made their world premieres at the prestigious Sundance Film Festival. After a pair of fictional features, the American director took the unusual step of turning to the documentary genre for “Inequality for All.” The pivot to non-fiction seems to have been a wise career move, especially in light of the fact that his first two features, both indie comedies, ended up being flops with mixed to poor critical reviews and minimal box office returns.

“Inequality for All” left Park City, Utah, with Sundance’s U.S. Documentary Special Jury Award for Achievement in Filmmaking. “With clarity, humor and heart, this timely film reveals the underpinnings of an urgent threat to American democracy,” the festival said. Hopefully for Kornbluth, the third time is the charm. 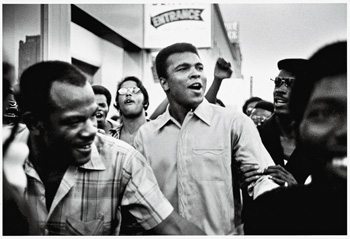 Muhammad Ali walks through the streets of New York City with members of the Black Panther Party in September 1970 in the documentary “The Trials of Muhammad Ali.”

American director Bill Siegel (co-director of 2002’s Oscar-nominated political documentary “The Weather Underground”) received a warm reception when he presented his latest documentary, “The Trials of Muhammad Ali,” at its world premiere during the 2013 Tribeca Film Festival. No wonder. Ali is now one of the most celebrated sports heroes of our time. But there was a time not that long ago when Ali was a polarizing and divisive public figure despised by many segments of American society.

“The Trials of Muhammad Ali” focuses on the toughest fights of the celebrated heavyweight boxer’s life, which happened outside the ring — in the American justice system as well as the court of public opinion.

Building on his experience two decades ago as a researcher for the six-hour documentary “Muhammad Ali: The Whole Story,” Siegel mines deeper into the subject matter to find gold. The main attraction is a treasure trove of archival footage showing Ali being himself: a reckless young man whose charisma and intelligence became refined over time as he matures. His endurance as a cultural icon far outlasts his famous, tumultuous reigns as the heavyweight champion of the world.

Born Cassius Clay, the prodigious boxer culminated a stellar amateur career by winning the Gold Medal for light heavyweight boxing at the Rome Summer Olympics in 1960, making him a public figure at 18 years of age. After turning pro, he famously upset Sonny Liston in February 1964. At 22, he was the youngest boxer to defeat a reigning heavyweight champion. Shortly afterward, Clay controversially converted to Islam and changed his name to Muhammad Ali, under the influence of his spiritual teacher, Elijah Muhammad, leader of the notorious Nation of Islam. After Ali joined the group, the World Boxing Association stripped him of his championship title.

In 1967, following Ali’s refusal to be conscripted by the U.S. Army to serve in the Vietnam War, claiming to be a conscientious objector, he lost his boxing license and received a five-year prison sentence for dodging the draft, which he appealed over a lengthy legal process. In a new interview, an ex-U.S. Supreme Court clerk recalls how the court was not intending to hear Ali’s appeal at first, but the justices finally overturned the lower court’s guilty verdict in a unanimous 8-0 decision.

To make a living while suspended from boxing, Ali transformed himself into a public speaker, largely on a tour of colleges where audiences became increasingly sympathetic to his viewpoints opposing the Vietnam War and institutionalized racism. He also picked up gigs appearing in movies and theater, including astonishing footage of him singing in “Big Time Buck White,” Oscar Brown Jr.’s Broadway musical about slavery. 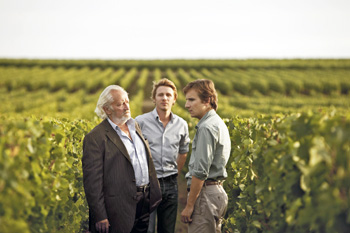 From left, Niels Arestrup, Nicolas Bridet and Lorànt Deutsch lock horns over who will take over a French winery in “You Will Be My Son.”

The engrossing French psychological thriller “You Will Be My Son,” directed and co-written by Gilles Legrand (“Malabar Princess”), elegantly explores the universal but very French themes of family, work and loyalty. The lush cinematography sets the stage for the pastoral melodrama, photographed on location at the Château Clos Fourtet in the historic French wine region of Saint-Émilion. Legrand and co-writer Delphine de Vigan draw up a serviceable blueprint laying out the intricate schematics underlying several levels of complex father-son relationships. Their smart script provides rich back story for the characters and intelligent dialogue for the actors to chew on.

As the feisty, aging patriarch of his sprawling estate, veteran character actor Niels Arestrup’s larger-than-life presence dominates the frame and the characters around him. Patrick Chesnais gives Arestrup a run for his money as another grumpy old (French) man. Lorànt Deutsch seems rather bland as the mild-mannered heir-in-waiting, though that is definitely an intentional contrast. And in his first screen appearance, Nicolas Bridet makes a splash as the upstart pretender to the crown.

Stern proprietor Paul de Marseul (Arestrup), a widower low on emotion, has proudly commanded the family business, a highly respected winery, since taking over from his father at age 17. He’s been in charge of producing their array of high-quality red and white wines along with François (Chesnais), his chief vineyard manager for nearly four decades. After François receives a diagnosis of terminal pancreatic cancer, Paul is forced to figure out how to replace the irreplaceable for the next season.

Paul’s meek adult son Martin (Deutsch) and his gorgeous wife Alice (Anne Marivan) also live in the chateau. In François’s absence, loyal Martin wants to claim what he views as his rightful position as the heir apparent. Though Martin has excelled at his administrative duties supporting the vineyard, Paul doubts his bookworm son has the artistry, chops and drive to actually make excellent wines. Still, the patriarch lets Martin give it a go, if seemingly only to have multiple chances to ridicule his son for committing repeated novice errors, further eroding Martin’s self-confidence.

Truth be told, Paul desires better than his own progeny, so he goes out to get what he really wants. As an alternate plan, Paul quietly reaches out to Philippe (Bridet), François’s debonair prodigal son, who promptly resigns his job in Napa Valley to return to Saint-Émilion. Though Martin strives hard to please his father, wanting nothing more in life, he simply does not have the God-given abilities and experience to compete in this arena with Philippe’s natural talents and sophistication. All of a sudden, Martin’s boyhood friend Philippe has become his deadly rival in a high-stakes game of thrones.


In partnership with the Goethe-Institut Washington, the series “Richard Wagner Revisited” commemorates the German composer’s 200th birthday (born 1813). David Gariff, senior lecturer at the National Gallery of Art, delivers the illustrated lecture “Images of Wagner in Art and Film,” which explores the legacy of Wagner’s image and music in film, painting and sculpture (Sat., Oct. 12, 2 p.m.).