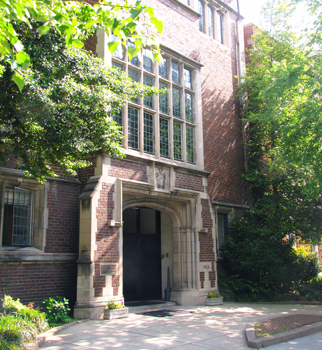 Thousands of international students come to Washington, D.C., to study every year, jumping headfirst into a country and culture that may be completely alien to them. Beyond navigating the rituals of academic and social life in the United States, they’re faced with the task of finding housing in a city that boasts an expensive — and extremely competitive — housing market.

The International Student House is a 100-year-old Tudor-style residence that rises five stories over R Street in the heart of the desirable Dupont Circle neighborhood.

In that, the International Student House is a refreshing surprise. Located in the heart of the desirable Dupont Circle neighborhood, the 100-year-old Tudor-style residence rises five stories over R Street, resembling a home that would be better placed in England than the U.S. capital. Inside, up to 100 graduate students from across the globe share both roof and relationship, living in a community that celebrates the many countries and cultures from which they hail.

Established in 1934 by the Quakers, the International Student House in D.C. — then located on New Hampshire Avenue and home to only 18 students from Georgetown, George Washington, Catholic, and American universities — sought to ease the transition of international students arriving in Washington for undergraduate and graduate studies. It also served as a refuge for students of color, both local and international, who were effectively shut out of rooming houses throughout large parts of the city due to de facto segregation.

In 1946, the organization purchased the house on R Street from the family of Demarest Lloyd. In 1967, a second building was constructed adjacent to the house, and two decades later a third building located behind was purchased to expand capacity to 100 students at a time, or 300 over the course of a year. (The relationship with the Quakers ended in the 1960s, and the International Student House now operates as a nonprofit organization that’s affiliated with 22 International Houses around the world.)

To date, says the organization, it has housed some 10,000 students from 130 different countries. This semester, 40 countries are represented. Notable alumni include a former Norwegian finance minister, a member of Indonesia’s parliament and Geir Haarde, who served as Iceland’s prime minister from 2006 to 2009.

Now, international graduate students and interns pay between $1,200 and $1,600 a month — an enviable rate for the neighborhood — for single, double, triple or quad accommodations, with communal breakfast and dinner included. The house used to accommodate undergraduate students, but it transitioned to graduates after the drinking age in the U.S. was raised to 21 in 1984; it’s easier for the house to avoid legal entanglements if everyone is of legal age, said board president Putnam Ebinger.

In early October, the International Student House held its annual gala, which honored Chuck Hagel, former two-term Republican senator from Nebraska, with its 2012 Global Leadership Award. The organization’s leaders, board members, students and invited guests mingled in the house’s outdoor garden and dined in the dramatic great hall, modeled after Haddon Hall in Yorkshire, England. 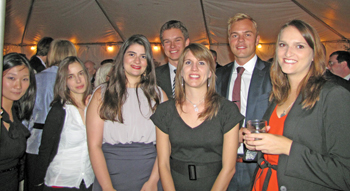 Board members and students spoke glowingly of the house, saying that it eased otherwise difficult transitions for international students and facilitated friendships that are the foundation of global cooperation.

“It’s a hidden gem in Washington,” said Ebinger, a former dean at Georgetown’s School of Foreign Service. Herb Schmitz, a retired international businessman and the board’s longest-serving member, called the house “incredibly unique,” even more so because it is the only one of its kind in Washington.

Sayed Ehsan Hosaini has been in the house for two months, having traveled from his home in Herat, Afghanistan, to attend the George Washington University on a Fulbright scholarship. Finding the house was a stroke of luck, he said — it was the first thing that came up on Google — but one that he couldn’t be more thankful for.

“They’re like family,” he said of his international housemates. “We hang out together, we share together. You come home from school, and you’re so tired, so stressed. All of a sudden, you see so many faces in front of you; people make jokes with you. I’m blessed to be here.”

“There’s nothing better,” said Susanne Wagner, who came to Washington from Germany for a semester-long exchange program at George Washington’s Law School. She was tipped off to the house by a friend who had lived there. “I followed him on Facebook during his semester here, and I could see how much he liked it here, how many friends he made, how great it was.”

Those friendships, said speakers at the gala, are invaluable. François Delattre, France’s ambassador to the U.S., celebrated the spirit of “hospitality, cultural understanding and global partnership” fostered by the house. Former Sen. Hagel said that it facilitated the person-to-person connections that underpin global engagement. 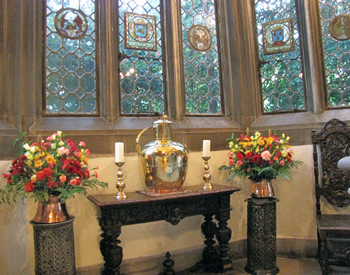 The International Student House is home to some 100 graduate students from across the world who pay between $1,200 and $1,600 a month — an enviable rate for the neighborhood — for accommodations, as well as communal breakfast and dinner.

Those principles have run throughout the house’s history. In 1947, an article on the house by the Washington Post cited a student from Sierra Leone attending the school of dentistry at Howard University: “After I became a member, I found it was the best organization for knowing and understanding human relationships. It could be the nucleus for the solution of world problems,” he told the newspaper. A decade later, another article on the house opined: “When strangers become friends, tolerance and understanding follow.” In 1988, the house was called a “United Nations of college students.”

It’s easy to see how those principles can travel the globe: Many of the students at the gala said they would return home as soon as they completed their studies. Hosaini said he’d be taking his knowledge back to Afghanistan, where he plans on starting a business.

But despite its invaluable mission, the International Student House faces ongoing challenges in maintaining a residence that is a century old and sustaining existing programming for its residents. Thomas O’Coin, the organization’s executive director, admitted that the house — currently valued at $6.5 million — is “terribly expensive to maintain,” and survives off what students pay to live there and a smattering of contributions from private individuals and corporations.

“It’s been a struggle,” he said, noting that the house needs an elevator to fill an empty elevator shaft, new electrical wiring, and a more efficient heating and cooling system. The last renovation took place in the late 1980s — it cost $1 million — and the organization has started planning a capital campaign, though details on fundraising goals have not yet been made public.

O’Coin and the board members are optimistic, though, and believe that the mission that has sustained the house for seven decades will sustain it through the future. According to Ebinger, the house is still popular — for every available spot, the organization receives between five and seven applications.

As China Jessup, who has served on the board since 1975, put it: “It still amazes me that such a thing is possible.”