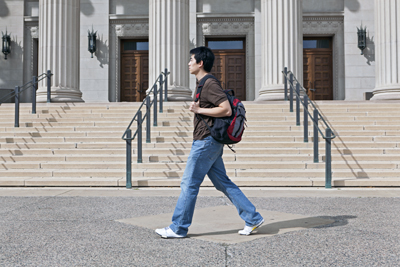 The waves of international college students landing on the shores of the United States are reaching new heights, hitting a record high of nearly 820,000 foreign students in the U.S. during the 2012-13 academic year, according to the Institute of International Education’s latest Open Doors report.

Most of the growth — a 7 percent increase over 2011-12 figures — was driven by China and Saudi Arabia. According to the Institute of International Education, “There are now 40 percent more international students studying at U.S. colleges and universities than a decade ago, and the rate of increase has risen steadily for the past three years.”

Likewise, the number of American students studying abroad is at an all-time high, with more than 280,000 heading overseas.

This cross-cultural surge is reshaping not only higher education around the world, but also local economies. In fact, foreign students poured $24 billion into the U.S. economy during the 2012-13 school year alone, reported the Association of International Educators (NAFSA).

Spending by international students and their families creates three jobs in the communities where they study for every seven who are enrolled in school, according to NAFSA. These students — the majority of whom are supported by personal and family funds — also contribute cash to the local economy.

The nearly 40,000 foreign students attending colleges and universities in D.C., Maryland and Virginia pumped $1.2 billion into the regional economy. (The area also saw an overall increase in international enrollment of 7.5 percent.)

The largest group of international college students in the United States in 2012 came from China, with 235,000 Chinese students enrolled here, an increase of 21 percent over the previous academic year. Students from India were in second place, with nearly 97,000 enrolled, followed by South Korea. Combined, China, India and South Korea now represent nearly half of all foreign students in the United States

Enrollment though was down for the second year in a row for India and South Korea, a reflection perhaps of improved education and employment opportunities back home.

On the flip side, several countries saw significant jumps, in part because of government support for their citizens to study abroad. For instance, there was a 30 percent increase in the number of students from Saudi Arabia, with nearly 45,000 Saudis studying in the United States, largely funded by the Saudi government scholarship program, now approaching its 10th year. Kuwait, which has similar government scholarship programs, saw a 37 percent rise. Likewise, Brazil experienced a 20 percent spike thanks to scholarships from the Brazil Scientific Mobility Program. Interestingly, the number of students coming to the United States from Iran also grew significantly, by 25 percent.

Washington-area statistics hewed to these national trends, with a few notable differences. Compared to the U.S. average, Saudi Arabia sent slightly higher percentages of students to D.C. and Virginia; the latter also had higher numbers of students from India, South Korea and Vietnam.

Maryland’s fourth-largest student group came from Nigeria, with larger numbers of Nigerian students here than anywhere else in the country. Maryland also had a higher-than-average number of students from Taiwan.

America’s higher education system can expect strong demand from international students over the next decade and probably beyond, Alan Ruby, a professor at the University of Pennsylvania Graduate School of Education, told The Diplomat.

Ruby teaches about globalization’s effects on universities and education around the world. He’s also currently a consultant to the World Bank, where he was a former director, leading programs in education, health and social insurance in 12 countries. He also served for six years as Australia’s deputy secretary of employment, education, training and youth affairs.

In a June 2013 article on international student trends published by NAFSA, Ruby cited a UNESCO prediction and other figures indicating that the global population of roving international students could reach a stunning 7 million by 2020, thanks to world population growth, middle class expansion and increased demand for internationally skilled workers. He noted that many students in this large influx will seek out English-language academics.

At the moment, the number of foreign students that different countries absorb spans the spectrum. According to the Institute of International Education’s recent Open Doors report, international students make up about 1 percent of the higher education population in China, 3.9 percent in the United States, 11.1 percent in Germany and 12.1 percent in France. Britain and Australia have the highest percentages, at 19 percent and 26.4 percent, respectively.

“In summary, global demand [for international higher education] is up, the Australian market is approaching saturation, Canada is planning for growth at current rates to sustain market share, and U.K. capacity is constrained by price and visa policy,” Ruby surmised in his June NAFSA article. “That leaves the U.S. market as the focus of unmet demand for onshore, English language-denominated education for the next five to 10 years.”

The growing recognition of how important an internationally skilled workforce is to a country’s bottom line is prompting public policy changes at the top, Ruby said in his conversation with The Diplomat.

Brazil and other Latin American countries, as well as Saudi Arabia and Kazakhstan, now have programs that provide government scholarships to students who study abroad, sometimes with formal or informal strings attached to bring students with degrees back home to prevent a brain drain. When it comes to welcoming these students, Canada and Britain are making their visa processes slightly easier to attract more foreign students.

Changes in the makeup of incoming student populations are also going to affect the economics and structure of a university, Ruby pointed out. A university with a focus on doctoral degrees that may take many years to complete will have a different business model than an institution focused on four-year undergraduate degrees, he said, noting that until recently, international graduate students outnumbered undergraduates.

That’s now reversed — and the current uptick in foreign students at the undergraduate level could have an impact on institutional structures if the trend continues.

In addition, Ruby noted that on-campus culture and day-to-day life will change with increasing internationalization. Student diversity will expand, and universities will have to offer new kinds of courses and teaching strategies.

Ruby said the effect will be similar to the transformation of universities and colleges in the West that shifted from systems designed for elites to ones serving large numbers of students from diverse backgrounds — that is, the relatively recent democratization of higher education.

This happened in the United States after World War II, when vets coming home from the front could take advantage of the GI Bill to help pay for college. Schools were initially not prepared for the large influx of veterans — many of them older and married — pouring into their classrooms. A similar phenomenon occurred in Britain when university student slots were greatly expanded in the early 1960s.

Today, the effects of foreign students are already being felt on campuses across the United States. In 2012, the American Council on Education and the State Department held a forum on university internationalization in America. Faculty hiring standards had started to change, the forum found, with more than half of all universities polled now considering international experience and skills in the hiring process and many changing their tenure codes to include them.

What does this fluid education landscape mean for international students who wish to study in the United States? What does it mean for their families back home?

As much as the chance to study in the U.S. presents a valuable opportunity for students, it also presents them with a challenge, because teaching methods in this country can differ greatly from those at home.

“If they are used to large classes with lectures and suddenly walk into a small Socratic seminar with discussions, it can be very difficult for them,” Ruby said. The quickness of American speech and the rapid responses expected of students can also be difficult to handle.

International students can prepare themselves, and their parents can help, by making sure to ask about pedagogy when researching college options in the United States — ideally during an actual campus visit, though questions can also be done by phone or email if necessary.

Finding the right school and the right program will make all the difference in the world, Ruby said.

In fact, the explosive growth of international education will make a huge difference to the world itself. “International students coming to study in the U.S. benefit from access to some of the finest professors and research laboratories in the world, and Americans benefit substantially from the presence of international students who bring their own unique perspectives and knowledge to the classroom and the wider community,” Allan Goodman, president and CEO of the Institute of International Education, said in the Open Doors report.

“We encourage U.S. schools to continue to welcome more international students to their campuses,” added Evan M. Ryan, assistant secretary of state for educational and cultural affairs. “International education promotes the relationship building and knowledge exchange between people and communities in the United States and around the world that are necessary to solve global challenges.”

Maryland Institutions with the Highest Number of Foreign Students

Virginia Institutions with the Highest Number of Foreign Students

Washington, D.C., Institutions with the Highest Number of Foreign Students