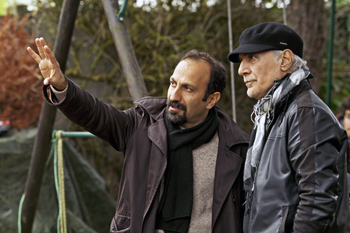 Iranian writer-director Asghar Farhadi, left, and cinematographer Mahmoud Kalari collaborate on “The Past.”

Iranian writer-director Asghar Farhadi’s previous release, “A Separation,” won the coveted Academy Award for best foreign language film, a first for Iran. On a crisp fall afternoon at the legendary Waldorf Astoria New York, The Washington Diplomat spoke to him about his new film, “The Past,” about an Iranian man who returns to Paris to divorce his long-estranged wife, who has moved on to another relationship.

With “The Past,” Farhadi shot his first film outside of Iran. “Before me deciding to make a film in France, it was the story that dictated to me to make it in France. It was the story of a man who’s traveling to another country. Being far and being on a trip was part of this story. I chose France because of all the other countries, I had the most trips to France and was more familiar with it,” the director explained through a translator.

The nugget for the plot was also planted years ago. “My friend had told me he was on his way to another country to make his divorce from his wife an official divorce and to finalize it on paper. This memory had stayed with me for years,” Farhadi said.

The helmer benefited from local talents like popular French star Bérénice Bejo and French-Algerian actor Tahar Rahim. He actually met Bejo while touring the United States to promote “A Separation.” She was there promoting her Oscar-winning silent film “The Artist.”

“We kept running into each other in the hotels or in different ceremonies. One of the benefits of these trips is that you get to meet new people, but the rest of it is boring,” Farhadi said.

“I got to know Tahar through ‘A Prophet,’ and I really liked his acting,” the director said, referring to the 2009 film about a young Arab man sent to a French prison, where he becomes a mafia kingpin. “When I first saw him in ‘A Prophet,’ I realized that he has a certain intelligence, perhaps it’s an unconscious intelligence, that makes him separate from the clichéd role that he could be playing. He didn’t play that clichéd role. Instead, he offered us a new kind of acting.”

The third leg of the love triangle in “The Past” is played by Ali Mosaffa, an Iranian actor who has also directed several films.

Farhadi reflected on how the election of Iran’s new reformist-minded president, Hassan Rouhani, might make it easier for filmmakers to work in Iran. “I have two explanations. One is that it’s still very new and very early to judge what the political scene is. The new government has only been in office for a few months, and we still need more time to judge for that. But in the first few months that they’ve been working, we can feel that a lot of pressures have relaxed,” he said.

“The second explanation I have is that I didn’t leave Iran in order to escape the difficulties. I made films before in Iran under difficulties. And this time, I let the story take me to where it’s believable to have been made.

“What I’d like to stress is that I believe censorship is present all over the world right now,” he added. “In some countries, censorship comes from the government and from the state. In other countries, it comes from the capital [money]. I have a friend in France who made a film 15 years ago, and it’s a very good film. He released that film, but he can’t make another film because no one is willing to finance his next film.”

Farhadi said he collaborated with his actors, both French and Iranian, on the same level. “I don’t take suggestions easily, but if I believe in them, I accept them. I don’t divide the world into French or Iranian. I don’t look at actors as either French actors or Iranian actors. I thought both were excellent.”

But there were certain differences filming in France — namely the language barrier, because the director was filming in a language he didn’t fully understand. “Of course, filmmaking in itself is a difficult job. Don’t expect filmmakers to tell you that it was comfortable or easy. And it’s good that it is difficult. Otherwise, 99 percent of the people would be making films right now,” he quipped.

“Not knowing the language at first seemed like an obstacle, but later on, it turned into a merit in itself. I learned from it. I learned that communicating with people is not only through language. It could be through gestures, looks, from the mimic of your face, many other ways.

“Even language itself has many different layers to it. One layer is the information that we choose to exchange. Another layer goes to the history and culture that’s behind the language. In the two years that I spent in France, I decided to get to know the rhythms and music of the language — and the way this music brings us closer together.”

At the Conrad New York Hotel, The Washington Diplomat interviewed American director Spike Lee (“Do the Right Thing,” “Inside Man”), writer/co-producer Mark Protosevich (“I Am Legend,” “Poseidon”) and lead actress Elizabeth Olsen (“Martha Marcy May Marlene”) about their new movie “Oldboy,” an American adaptation of the classic 2003 South Korean thriller of the same name by Park Chan-wook. In the Spike Lee reboot of “Oldboy,” Josh Brolin stars as Joe Doucett, a man who seeks revenge after being imprisoned in a cage-like hotel room for 20 years without any explanation. 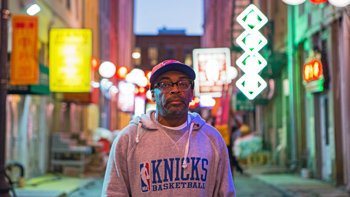 Spike Lee directs “Oldboy,” an American adaptation of the classic 2003 South Korean thriller of the same name by Park Chan-wook.

Park’s film was so original and well executed that there was fierce opposition by many fans to the idea of a remake. Lee recalls watching the original Korean film when it came out. “I’d never seen anything like this in my life,” he told us. “Josh went to Park and asked for his blessing. Park gave it, and the one thing he said to Josh — which Josh related to me — was ‘make a different film; don’t do the same thing I did.’ [So] that’s the way we did it.”

Protosevich was also drawn to Park’s violent cult classic. “The two things that first attracted me to the story was it’s a story about redemption and revenge. Those are two things that actually are somewhat contradictory. Revenge is actually not a redeeming quality. People often mistake revenge for justice. Redemption — because this man is trying to make amends for the wrongs he’s committed in his life — that’s actually one of the big ideas in the movie that gets addressed, the idea of being responsible for your actions, your statements, your thoughts throughout the course of your life,” the writer said, noting that the protagonist is “going through an experience that absolutely transforms him as a human being. A lot of it is about that experience in the hotel room. In our version, it’s a much longer part of the story.”

“I read the script [by Protosevich], and that was enough for me to be obsessed with this story,” said Olsen, who plays a woman trying to help the troubled, violent title character. “And then I saw the [original] movie…. It’s basically a perfect film.”

Lee said the lead female character that Olsen plays in his film is stronger than in Park’s version. “We definitely wanted to make her character as strong as possible, as strong as it makes sense within the framework of the screenplay. And I think that Lizzie conveyed that…. And also, Josh’s character has something to play up against to. The character can’t be a pushover,” said the director, who first became aware of Olsen’s potential after watching her performance as an escaped cult member in the indie film “Martha Marcy May Marlene.”

“Working with Spike is a world of a difference than working with a first-time director, and I feel like I’ve worked my fair share of first-time directors now,” Olsen said. “The difference is incredible. The funniest thing is the more experience you have, the more collaborative you are because I think you are more confident in your own abilities. Spike, the first thing he does is want to know everything that you think…. It’s a really comforting thing to work with a director like that.”

Lee said he insists on a standard rehearsal time, which is when the collaboration with his actors takes place. “I’m not going to shoot unless I have rehearsal time. That’s built into the budget — two weeks,” the director explained. “Rehearsal time, a lot of people don’t understand this. Rehearsal time is not just actors doing lines. Eating dinner, having meals, talking, watching other films, going to events together — it’s a whole thing to spend time together, and vibing and throwing ideas around. That’s what we do.”