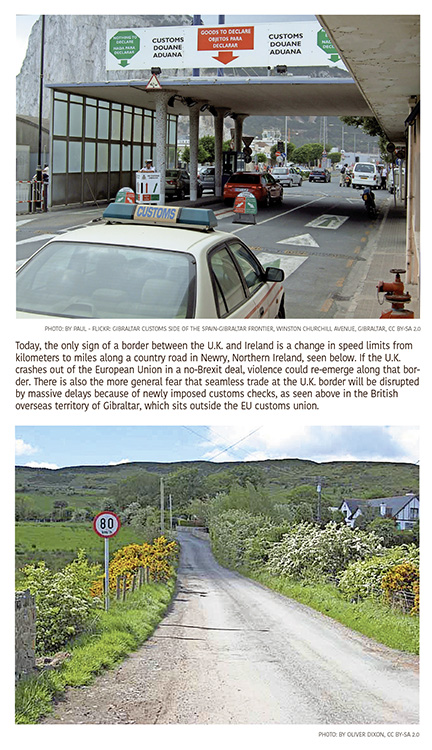 NEWRY, Northern Ireland — Here, where the Belfast-to-Dublin highway squeezes between steep, inland hills and the chilly waters of the Carlingford Lough inlet, the only sign nowadays of an international frontier is a sudden change in speed limits.

It seems an insignificant shift these days, but between 1968 and 1998, within just a few miles of where this new road now runs, 16 people were killed and 18 wounded at crossings on this now almost invisible frontier.

They were the victims of some 14 bombings, numerous shootings, roadside executions, arson attacks and car rammings, with most of them civilians caught in the crossfire during the three decades of violence known as “The Troubles.”

Indeed, this border, which runs for some 210 miles west and then north from here, was a focal point for conflict throughout that bloody and bitter time.

Periodically, the violence reached across to the U.K. mainland and continental Europe, too, yet flickered constantly here along the border.

“The violence was relentless and every day,” said freelance journalist Rachel Lavin, who has deeply studied and reported on this frontier’s dark history. “The border was constantly the focus for dramatic incidents, with smuggling, killings, bodies being dumped — while all around people tried to continue with their daily lives.”

Now, 20 years after those shootings and bombings stopped — thanks to an internationally acclaimed peace accord — the fear here is that they may be about to return.

And the reason why can be summed up in just one word: Brexit.

In terms of international frontiers, the border is a relatively recent one, dating back to 1922 and the still-controversial treaty that ended the Anglo-Irish War.

From its beginning, the border was thus a place of division, symbolic of a wider struggle. It was never accepted by more radical Irish nationalists, both north and south, who continued to press for a united Ireland. At the same time, it was seen as a key determinant of identity by many northern Protestants.

“The physical border represents a history of grievances,” Peter Sheridan, former assistant chief constable in the Police Service of Northern Ireland (PSNI) and now CEO of the peace-building charity Co-operation Ireland. “In the 1950s, there was an IRA campaign along it, and then there were the Troubles. The violence always started on the border, then spread to Belfast and Londonderry.”

In 1998, however, that violence came to an end with the signing of the Good Friday, or Belfast Agreement, between the U.K., the Republic of Ireland and eight political parties from both north and south of the border.

The U.S. played a major role in this, via President Bill Clinton, while Canadian Gen. John de Chastelain oversaw the decommissioning of weapons held by the paramilitaries.

Within a few years, the British Army had withdrawn, while the watchtowers, army bases and checkpoints that lined the border were dismantled and taken away.

The 208 road crossing points — almost one for every mile of frontier — were also reopened. Life for border communities began to return to normal.

At the same time, as the states on each side of the border were both members of the European Union and its single market, there was also no need for any normal border checks on goods, services and people flowing across.

Indeed, “EU membership was the background assumption of the entire peace process,” said Colin Harvey, professor of human rights law at Queen’s University in Belfast. “It was like the air that we all breathed.”

Common EU membership enabled the border to go from being the most patrolled and militarized in Western Europe to its current, almost intangible status, removing a key flashpoint for division and tension.

Businesses that worked on both sides of the border became common, with a high degree of integration springing up.

“They say that nowadays, it takes four or five border crossings just to get a pot of yogurt from cow to breakfast table,” said Tom Healy, director of the Nevin Economic Research Institute (NERI) in Dublin, pointing out the level to which farmers and food businesses have become straddled right across the frontier.

“The Belfast Agreement made the border invisible,” added Sheridan. “It also said to people in Northern Ireland, you have the right to choose your birth right — Irish or British or both — and we will uphold that. One of the great things, too, was that it also created a Northern Irish identity. Both Catholics and Protestants in the north became settled in the idea of an identity within the EU.”

All this, however, hit an unexpected wall when, on June 23, 2016, the U.K. (although not Northern Ireland) voted by a small margin to exit the European Union. 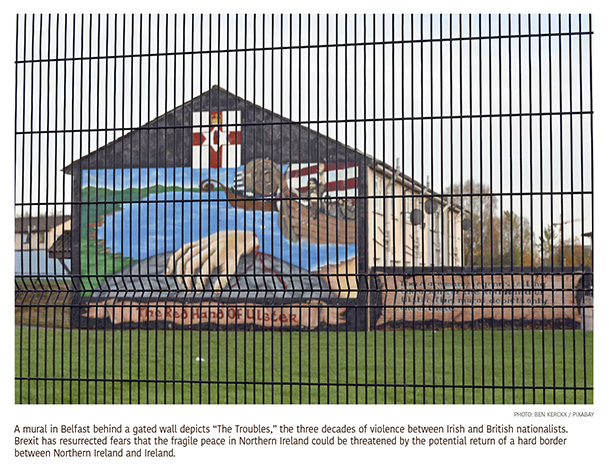 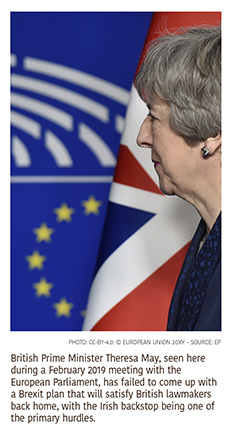 To avoid this hard border, British Prime Minister Theresa May and EU leaders came up with the so-called Irish backstop, which has now become the main hurdle to a Brexit deal. Assuming the U.K. does not crash out of the EU on its scheduled departure date — March 29 — the country would enter into a transition period until at least the end of 2020, during which time it would remain in the EU single market and customs union while negotiating a more permanent relationship.

The Irish backstop would ensure that if the U.K. and EU fail to come to a long-term trade arrangement after the transition period ends, the Irish border — Britain’s only land border with the EU — will remain open and invisible.

If that happens, Britain would remain in the EU customs union (whereby goods among member states are not charged tariffs), and Northern Ireland would be bound by many rules of the single market (i.e., adhering to a single set of product standards) until some agreement can be reached.

The pro-Brexit camp says this will effectively tie Britain to EU rules forever, essentially rendering the Brexit divorce moot. Supporters of the backstop say it is a necessary last resort insurance policy to prevent the type of violence that plagued the region for decades.

Indeed, both EU and U.K. leaders quickly agreed after the 2016 Brexit vote that any deal on Britain’s leaving, known as the withdrawal agreement, had to guarantee no return to customs posts and identity checks on the island of Ireland.

To formalize this, Britain first proposed that if such an agreement had not been reached by March 29, a customs barrier would come down between mainland U.K. and the island of Ireland — both north and south.

This would avoid the return of a hard border between Northern Ireland and the Republic, with the frontier instead moving to the middle of the Irish Sea. Northern Ireland would stay part of the EU customs union and single market, while the rest of the U.K. left.

Yet, while some businesses in Northern Ireland saw this potential special status as a major chance for their region to benefit economically from Brexit, this arrangement proved unacceptable to the largest British-identifying, Protestant grouping in the north, the Democratic Unionist Party (DUP). They saw this as an unacceptable loosening of the bonds between Northern Ireland and the rest of the U.K.

With May’s government needing the support of the DUP to stay in office after her Conservative Party lost its majority in elections in 2017, the DUP’s concerns also took on much greater weight. May thus moved to adjust the scope of what had become known as the backstop to include the whole U.K., in the event of no deal being reached.

The EU subsequently agreed to this position, yet the withdrawal agreement then met with a storm of protest from within May’s own party. Leading supporters of Britain leaving the EU argued that unless the backstop had an agreed time limit, it might keep the U.K. effectively within the EU customs union and single market indefinitely.

This objection helped sink the agreement in the U.K., with parliament voting overwhelmingly against it on Jan. 15, 2019. It remains, however, the deal still offered by the EU, which has repeatedly stressed it is not willing to reopen substantive negotiations on a new one. 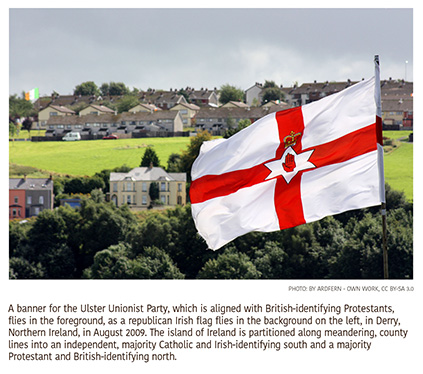 Since then, British politics has been dominated by efforts to find a work-around to this conundrum, possibly by extending Brexit negotiations past March 29 to avoid a hard crash.

Securing the support of the DUP will be critical to any deal, as will offering skeptics in May’s own party reassurances on the backstop, such as a time limit or a unilateral exit clause. (Thus far, the EU has ruled out considering alternatives to the current backstop agreement.)

At the time of this writing, there had been little progress on these issues, raising the spectre of the U.K. simply crashing out of the EU without any arrangements in place.

While this would likely be catastrophic for the highly interconnected British and Irish economies — the International Monetary Fund predicts around 50,000 job losses in Ireland alone — it would also be potentially fatal for communities on the border, and for peace.

“From day one of a ‘no deal,’ there will have to be a custom’s border,” said Paul MacFlynn, senior economist at NERI’s Belfast office. This is because the EU would have to protect its single market and impose fall-back World Trade Organization tariffs on Britain.

Yet the presence of physical infrastructure at the border would be disastrous for many local businesses. “Their whole business model, with supply chains that go back and forth across the border, would just collapse,” said MacFlynn.

It would also be a red rag to many Irish nationalists, including more radical elements.

Indeed, “There are people who want to use violence and will no doubt seek to,” said Sheridan. “Whether they have the capacity or not is debatable, but the PSNI chief constable recently asked for 400 more officers, so clearly he thinks there is a possibility of a renewed campaign.”

This has left many — both north and south of the border — increasingly frustrated with what they see as a lack of awareness in mainland U.K. in particular over how Brexit has put the peace process at risk.

“No one wants to be alarmist,” said Harvey, “but tensions are rising here. This is a fragile, post-conflict society and a warning has to be issued that we need to protect the peace process. Those people who talk so loosely about a no deal are grossly irresponsible. It would quite simply be disastrous.”