Home The Washington Diplomat December 2013 Italian Global Brand Piola Churns Out Pizza, Plus So Much More 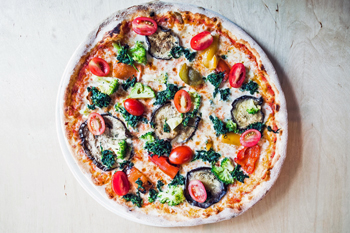 Piola, which opened in June, now serves a No Limit Pizza weekend brunch that highlights it signature Italian-style, thin-crust pizza.

The brunch is a happy solution to one of the biggest problems with Piola: trying to figure out what to order. There are so many enticing options from a menu that offers 44 varieties of pizza, 11 pastas and a healthy sampling of salads, meat courses and small plates. Given extra time and a big appetite, the weekend brunch offers a hearty taste of what Piola is all about.

And what it’s about is, of course, pizza — but this is so much more than a simple pizzeria, although simplicity is part of its charm.

The brunch menu includes smaller versions of many of the same pizzas as the regular menu, such as the Capricciosa — a balanced combination of ham, artichoke and mushrooms on a thin bed of tomato sauce and mozzarella — as well as other breakfast-themed varieties such as the Cancun, which features smoked salmon, cream cheese and capers on a traditional base. Bottomless sparkling drinks and sangria (for an extra charge) can make for an extra enjoyable, and lengthy, weekend outing. If you miss the brunch, Piola also offers a daily L’Aperitivo Italiano, a happy hour when guests can sample complimentary small bites of whatever the chef feels like whipping up, along with discounted drinks.

The Piola concept is organic, growing and changing as it absorbs elements from the locales in which the restaurants open. One of the most intriguing ingredients on the menu, arrived there by way of Piola’s South American locations, is catupiry cheese. Catupiry is a soft, mild cheese with low acidity that hails from the requeijão, or creamy cheese family, that was developed in Brazil by an Italian immigrant at the beginning of the last century. At Piola, the cheese is used effectively in both a white pizza, the Salvador — with oven-baked pulled chicken breast, mozzarella and spinach — and a red version, the Rio de Janeiro, made with pulled chicken breast, mozzarella and a dash of parsley. Both are delicious with the dollops of this buttery sweet delight.

In a nod to his Lebanese heritage, owner Nabil Ashi has also created the Breakfast in Beirut for the brunch menu. Made with za’atar spices and olive oil and served with labneh, olives, tomatoes, cucumbers and fresh mint, it is an interesting take on “pizza” from the other side of the Mediterranean. 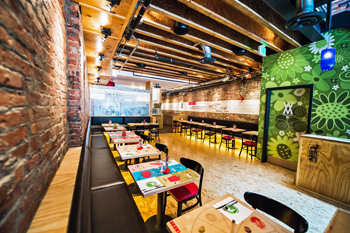 Exposed brick and ductwork, knotty plywood and recycled materials give Piola its quirky charm and have transformed a space that had been boarded up for many years.

While the menu offers an extensive array of different varieties (many designated by place that suggest the origin of the combos), overall the pizzas are simple and rely on the interplay of just a few flavors for their effect. Nor are the pies overloaded with too many toppings. There is no assault to the senses that can come with the attempt to do too much. Combinations range from the traditional Margherita — tomato sauce, mozzarella and fresh basil — to the very contemporary Odessa, a superb white pizza topped with caramelized onions, goat cheese and paper-thin slices of prosciutto crudo.

Piola specializes in Northern Italian pizza, which is distinguished from the Neapolitan style by a uniformly thin crust and minimal edge. The key to the pies here is the wood-burning oven that runs continuously at the very high temperatures required to get the crispy crust and blistered edges that are typical of this classic variety. (Alfresco diners on the roof are treated to the tantalizing aroma of wood smoke and baking bread, an unbeatable combination to whet the appetite.)

The oven was a central element in the transformation of the building on 14th Street that had stood empty and boarded up for many years. Just to get the oven into the space, traffic had to be stopped and the bay window removed. After that effort, everything must have seemed easy to Venetian designer Oscar Scomparian, who worked with Ashi to transform the old row house into a delightful space full of light and color.

A long bar and large staircase dominate the first floor, while exposed brick and ductwork, knotty, grainy low-grade plywood and recycled materials create an aura of a space in process. Rather than feeling unfinished, however, Scomparian’s design evokes an ambience of lively movement. The space glows with the blond plywood and Murano-type glass lighting fixtures that are a central design feature shared by all Piola restaurants. The cylindrical shades in all the colors of the rainbow, made by hand in Brazil for Piola, lend a festive and almost tropical feel to the space.

The 14th Street spot, which opened in June, is the second for Ashi, who started the first U.S. franchise of this international Italian restaurant brand in Arlington, Va., in 2006. The Piola concept originated in 1986 in the Northern Italian town of Treviso, just north of Venice, as an effort to reinvent one of the most quintessential Italian creations, the pizzeria, by going back to the basics — simple, fresh ingredients, straightforward preparations, and an emphasis on a comfortable and inviting atmosphere. The brand quickly flourished in Italy and spread throughout the world with locations in Central and South America, the United States, Canada and Turkey. 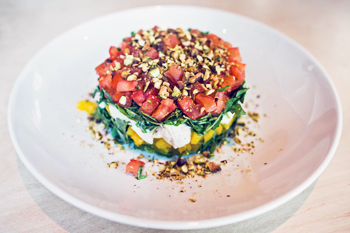 While pizza may be at the heart of the Piola menu, it is not the only thing worth trying. An array of interesting salads that don’t share the same emphasis on simplicity are a good complement to the pizzas. The most dramatic, the Roka Cabana, is a layered tower of arugula, fresh mozzarella, tomatoes, yellow bell peppers, pistachio nuts and pomegranate dressing. The more protein-rich Topo Gigio — a mixture of greens, arugula, tuna, cherry tomato, cucumbers, palm hearts, onions, fresh bean sprout, carrots and walnuts, tossed in a Dijon mustard dressing — works particularly well with the simpler white pizzas. On the other hand, the Calvino — made of sautéed New York strip steak, mixed greens, walnuts, gorgonzola cheese, cherry tomatoes, onions and sweet peppers, tossed with red wine vinaigrette dressing — is a meal all by itself.

If you prefer your carbohydrates boiled rather than baked, the pastas are a delicious alternative. The gnocchi, handmade daily in Piola’s kitchen, is a specialty of the house. Perfectly light, they are served simply in either a red sauce or four-cheese cream sauce. A particularly good pasta is the Penne Cividale, made of prosciutto crudo, cream, diced tomatoes, grated parmesan cheese and fresh rosemary — with the latter giving the rich dish a powerful aromatic appeal. The meatballs are another house-made specialty of note. Served with spaghetti or by themselves in the house tomato sauce, they are finely textured, highly flavorful little bites. The tomato sauce, which appears as an ingredient in many of the dishes, is made daily in house as well. It is a light and bright version that relies on just a few ingredients for its flavor, making it a highly flexible to work with.

There is so much to like packed into this little pizza spot. The food is excellent, the specialty drinks are refreshing, and the desserts are thoroughly satisfying. (Try anything that has the chocolate sauce. It is made with Belgian chocolate and is excellent.) The atmosphere is inviting and the service appealingly low key. Ashi is an excellent host with a gentle sense of humor and a real passion for what he is doing. His original professional background was in information technology before he opened his first Piola in Arlington, Va., but he seems to have a natural affinity for what it takes to make a restaurant work. Piola is altogether a welcome addition to Columbia Heights — a pizza place, to be sure, but so much more.