Charming, candid and eloquent. That’s what Nobuko Sasae is — and it’s not open to interpretation. She is the wife of Japanese Ambassador Kenichiro Sasae, mother of their two sons, and a professional interpreter for some of the world’s most prestigious conferences.

Perhaps the most intriguing facet of this translator’s personality is her easygoing style. Her candor and casual demeanor stand out in the more formal world of Japanese society.

Nobuko Sasae, wife of Japanese Ambassador Kenichiro Sasae, is a professional in­­ter­­­­preter who translates at high-level events and conferences. While in Washington, D.C., she’ll continue to accept freelance assignments but will cut back on her workload.

“Interpreting keeps my interest,” she told us. “It’s a different subject and different speaker each time. It’s satisfying because it’s different every day; every day is new … and I’m exposed to a new topic, new situation, new speakers.”

Given her job interpreting at high-level events, we asked if there is any conflict between her work and her husband’s. “No, I ask my husband beforehand for anything held here in Washington before I take the assignment or conferences he will be attending himself. We would both feel uncomfortable then,” she replied.

“There is no period I didn’t work,” Nobuko explained. “As a freelancer, I could be more flexible.”

Her husband’s career has also afforded her a great deal of flexibility. Although he has served in Japan’s Ministry of Foreign Affairs since 1974, Kenichiro Sasae spent most of his career in Tokyo, most recently as vice minister and deputy minister for foreign affairs. His first posting abroad, in fact, was in Washington, D.C., followed by a stint with the International Institute for Strategic Studies in London and then as special adviser to the United Nations High Commissioner for Refugees in Geneva. By 1997, he returned to Tokyo, where he held various positions until coming to D.C. last year.

It was during this period from 1997 to 2012 that Nobuko Sasae was free to translate in Japan and abroad because her husband was stationed in Tokyo.

“Since he is ambassador now and we are back in Washington, I plan to work much less. I want to maintain the minimum and keep my contacts in the interpretation industry. Here, I’ll accept assignments in New York or near by Washington. Unless I continue at some level it will be difficult to re-enter,” she explained. “I plan to take three weeks every six months and go back to Japan to do some work.”

She works through a professional agency and says she is proud that she “still has very good clients who ask for me.” Plus, Japanese agencies request her to work here. 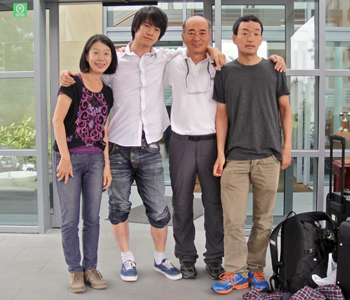 The couple poses with their two sons above: 31-year-old Jun, who is working toward a doctorate in French poetry, and 32-year-old Ryu, a doctor in Britain.

“[Interpreting] is an important part of me,” Nobuko told us, admitting that she had reservations about having to cut back on her workload if they were sent to Washington. “Before we came here, I was very resistant. We had heard the rumor that my husband would be asked to go to Washington as ambassador and I was happy when he was assigned here, but it was a dilemma for me.

“I wanted to be useful as a spouse,” she continued. “And my husband expects me to be with him. It is his and my hope that this is the best answer. It is a compromise…. It is very exceptional that we spent 15 years in Tokyo; it was very helpful to my career. That’s part of the reason I compromised this time.”

She added: “Somewhere in my heart, I know it is time for me to enjoy other things. It’s time to reset my life — it’s come earlier than expected,” said this mother of two sons, ages 31 and 32.

It’s also a welcome respite from a rigorous job. Nobuko works as both a simultaneous and consecutive translator. “During simultaneous translation, we work in a team of three or four. It is so intense. We switch off every 10 to 15 minutes,” she explained.

She always prefers to have some background information or better yet, the text, at least the day before to understand the core message and the vocabulary of the speech she’s translating. The homework is necessary because she interprets speeches in a variety of fields, from foreign affairs to financial matters, medical research to scientific findings.

Medicine, in fact, is a family tradition, although Nobuko’s interests are varied — and somewhat unexpected. Indeed, part of her charm is that she defies expectations and is refreshingly honest about her background, able to discuss serious topics yet instantly switch to lighthearted humor. For example, although she was seriously committed to her high school sport, fencing, she knows it was an unconventional path to take — one she chose for less-than-serious reasons.

“My father was a neurosurgeon and my mother’s five brothers were all doctors, so I thought I was going to medical school and be a doctor, but I spent all my time practicing fencing and not studying,” she recalled.

But all that practicing paid off. She was an award-winning fencer and won a silver medal in the All Japan Inter-High School Match and was often featured in newspapers.

Why fencing? “I like the costume,” she quipped, laughing. “I thought that fencing was so cool.”

Turning serious, she adds: “Fencing is a demanding sport. We used to practice in the summer and it would be so hot and humid in our gymnasium that we would wear wet towels around our necks.”

She may not have gone into medicine, but her 32-year-old son Ryu is now a doctor who lives in Britain. His younger brother, 31-year-old Jun, graduated from Oxford, did a workshop in Paris, and is working toward a doctorate in French poetry, examining how French poetry has influenced Japanese poetry and literature.

She misses their sons but like many other diplomatic families, they erase the long distances by communicating via e-mail. “It’s still nice to call them and hear their voices,” she noted. 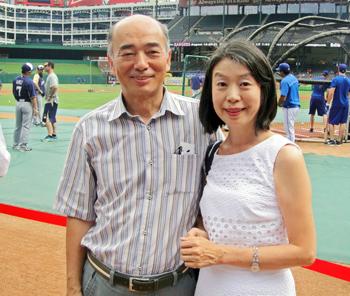 “The boys” were only four months old and 1 year old during their first diplomatic tour in Washington. While Nobuko was busy taking care of two babies, she signed up for classes at American University. “It was disastrous,” she admitted. “I had no time.”

They lived in Bethesda, Md. at the corner of Bradley and Wilson. “I only knew the wives of the other diplomats at the embassy. I didn’t have much time to make friends.”

Today, with the boys grown and more time available, the Sasaes enjoy mountain hiking and musical concerts. “When we are tired, it is music or hiking that gives us energy,” she said.

Although Nobuko loves to wear Japanese designs, she prefers Western-style clothes and doesn’t look forward to the time-consuming process of wearing elaborate kimonos for formal events.

“It takes a whole day to wear a kimono,” she explained. “First you have to go to the beauty salon to get a special hairstyle. It takes two to three hours and you take a big bag with you of your clothes. I will wear kimono for the New Year’s reception, the Empress’s birthday and the Cherry Blossom Festival.”

Of course, kimonos are also worn for weddings. And Nobuko’s wedding to her husband took place just six months after they met. It was a brief courtship, but the two knew they were right for each other from the moment they met and have never looked back.

“My mother’s friend knew him because he lived in her house, but she had never met me. I had been away studying at the University of Pennsylvania and a week after I got home they arranged our meeting. I was still jet-lagged,” she remembered. “We went to a hotel for lunch as instructed and then had dinner together. In between, we took a two-hour walk and he proposed to me. We knew we wanted to marry. We shared a common memory of studying in the U.S. One year earlier, he had gone to Swarthmore College, which is close to Philly. Our parents met each other at our wedding.”