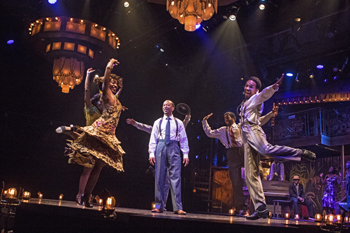 The Signature Theatre’s larger-than-life, kick-off production for its 2016-2017 season is a potent visual and musical wakeup call that lazy summer musings are over and it’s time to get moving.

“Jelly’s Last Jam” will take you back to a particularly tantalizing space and time when jazz, blues and ragtime were curious, but addictive, experiments and the role of African Americans in this musical evolution went through major growing pains.

Set designer Dan Conway creates another world before Act I even starts. He plops us in the middle of the Jungle Inn, a sleazy, salacious nightclub decked out in whorehouse reds and the cast iron and French antique decorative style found throughout New Orleans. Words like bawdy and illicit come to mind.

It’s hard not to engage in the decadent scene. Some audience members observe the action from bistro tables topped with crystal lampshades that surround the stage. Others sitting in conventional rows can almost count the beads of sweat on the actors’ faces, as a meandering stage that links circular dance spaces with runways flanks the audience. Meanwhile, the orchestra towers over the stage along the back wall, positioned on top of a jungle motif scrim and behind a cast iron fence with spiral stairs on each side.

Amid this evocative setting unfolds the story of Jelly Roll Morton, one of jazz music’s pioneers, whose life was anything but squeaky clean. Jelly is played by real-life jazz pianist Mark G. Meadows and his story is told through a series of flashbacks, emceed by the powerful and talented Cleavant Derricks as Chimney Man.

The narrative is a sort of musical version of “A Christmas Carol,” with Jelly Roll as Scrooge and Chimney Man as Jacob Marley’s ghost. Foreboding Chimney Man exposes Jelly (born Ferdinand Joseph LaMothe in 1890) as the conflicted but exceptionally talented artist who had plenty of inner demons. Morton struggled with his racial identity — he was born a colored French Creole mulatto in the Deep South — and this reportedly eroded his professional and personal relationships with fellow, often darker-skinned, African Americans. 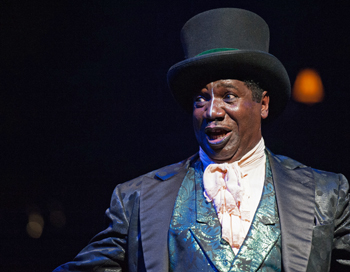 Cleavant Derricks as the Chimney Man.

For most of the play, we see an embittered man who was emotionally wounded as a teen by his strict Creole grandmother, played phenomenally by Iyona Blake, who disowned him for playing the piano at a local brothel (where he allegedly took on the nickname “Jelly Roll,” which was slang for female genitalia). Morton compensated for his pain with a large ego, and even though he was noted for arranging the first published jazz composition, he was infamously resented for claiming that he had “invented jazz” and turning on his closest allies.

Arguably the best part of the performance is the music, singing and dancing, but the production is not without its flaws. The script itself is a bit disjointed. The hurried ending miraculously ties up the unpleasantness of Morton’s life and finishes on a happy note that seems unfounded. And while director Matthew Gardiner makes excellent casting choices for the main parts and ensemble, his choice of Meadows as Morton, although apropos since he is actually an expert pianist, pales in comparison to the rest of the cast regarding the level of acting. This fact is not too surprising considering that Meadows has no prior acting experience and was recruited — reluctantly at first — by Gardiner after he came across a video of the up-and-coming musician.

However, the cast’s formidable talent as singers and dancers, as well as Morton’s original score and the orchestration by conductor Darius Smith, make up for the play’s failings.

With solid choreography from Jared Grimes that is heavy on syncopated, intricate tap, mixed with energetic Lindy Hop and African repertoire, the dancers appear to lift off from the stage in mid-flight. One performer actually dances atop a piano while it’s being raised onto the stage. Noted dancers include Joseph Webb, who appeared on Broadway in “Bring in ‘da Noise, Bring in ‘da Funk”; DeWitt Fleming Jr., a D.C. native; and Olivia Russell, a Howard University graduate, just to name a few. 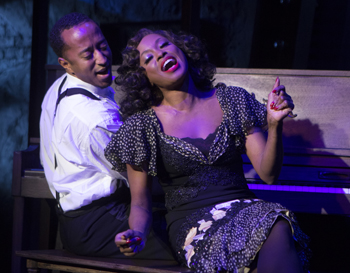 The large production numbers are peppered in between with outstanding solos. Felicia Boswell, who played Diana Ross in “Motown” on Broadway, is a sultry, gutsy, easy-on-the-eyes Anita, Jelly’s love interest. Boswell brings down the house in the musical number “Play the Music for Me” and her acting is on point. Iyona Blake as Jelly’s grandmother, meanwhile, gives a dauntingly strong rendition of “The Banishment,” and her black-laced Creole costume is just as frightening.

The trio of girls who play the Hunnies — Eben Logan, Nova Y. Payton and Kara-Tameika Watkins — are deliciously feisty, flirtatious flapper girls who bring shimmy and wiggle to a shameful new level.

As the play follows Morton’s trajectory from New Orleans to Chicago to New York, we witness his love/hate relationships with his sidekick, Jack the Bear, played by Guy Lockard, who he faults for being dark-skinned; and Anita, who eventually chooses Jack over him as a lover. Alongside Lockard and Boswell’s strong performances, here is where more acting chops from Meadows would have been welcomed.

In the end, “Jelly’s Last Jam” is the kind of crowd-pleaser that will make you forget the stifling heat and humidity outside and transport you to a different kind of sizzling environment.