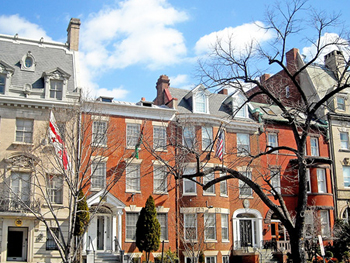 Kalorama is home to a mix of private residences and embassies, including the embassies of Georgia and Turkmenistan, seen above.

The 28 embassies in Washington’s well-heeled Kalorama neighborhood have recently gotten some new headline-making neighbors, including the new secretary of state, Rex Tillerson. Others include President Trump’s daughter Ivanka and her husband, Jared Kushner, who were among the first new residents associated with the new administration.

Of course, the old administration isn’t too far away. The Obama family also set up there while the younger of their two daughters finishes high school.

And then there is billionaire entrepreneur Jeff Bezos, Amazon’s founder and owner of the Washington Post, who calls the former Textile Museum home. He bought the 27,000-square-foot property for $23 million (in cash) and is restoring it to private-home status, which would make it the city’s largest house. Other notable neighbors include Bloomberg Media Group CEO Justin Smith, Fox News host Chris Wallace and former World Bank President James Wolfensohn.

Whether the new neighborhood residents will get together for what would likely be one heck of an exclusive block party remains to be seen, although it could come close at the Mitchell Park Annual Fun Day, to be held Oct. 29 this year, or the President Woodrow Wilson House Annual Garden Party in the spring, said Jim Bell, a Kalorama resident and executive vice president of TTR Sotheby’s International Realty.

“When you’re going down the sidewalks, you really don’t see a lot of activity,” said Bell, also known as the “king of Kalorama.” “The casual activity in these houses happens, quite frankly, in the back. If you’re going to a neighbor’s house, you’re more than likely going to go from the back of your house to the back of their house because that’s where the kitchens are.” 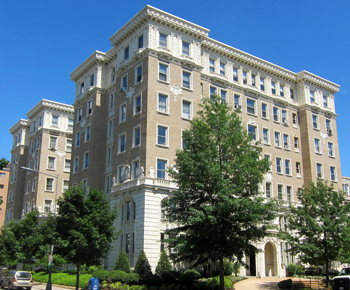 The Beaux-Arts-style condominium on Connecticut Avenue in Kalorama — built in 1915 and originally known as the Bates Warren Apartment House — has been home to notable residents such as President William Howard Taft, singer Lena Horne and Supreme Court Justice William O. Douglas.

We’re unlikely to hear about any soap opera-worthy drama coming out of the neighborhood, Bell added. Partisanship is checked at the door. “They all get along together, and it’s always been that way,” he said. “They just do it very quietly and very privately. It’s one of the hallmarks of the neighborhood.”

Maguy Maccario Doyle, Monaco’s ambassador to the U.S., has not run into her high-profile new neighbors yet, but “I’m thinking of inviting them all over for a glass or two of champagne,” she said. “Perhaps they will drop by to watch the Monaco Grand Prix with me in the springtime? I would love to host them. I’m sure we will discover we all have much more in common than just a zip code.”

Monaco’s residence has been situated in a century-old Colonial-style mansion since 2006. The four-level, three-bedroom brick home was built by former U.S. President Warren G. Harding in 1916 when he was a Republican senator from Ohio.

In recent weeks, Maccario said she has noticed more tourists in the neighborhood, but “if there is increased security, it is subtle and discreet,” she added.

Mostly, it’s simply a friendly neighborhood, European Union Ambassador David O’Sullivan said. The European Union has had a residence in Kalorama since 1972, and he looks forward to socializing with the new residents.

“I’ve met them through my work but not bumped into them in our neighborhood so far,” O’Sullivan said. “Someone did suggest I should get a dog to increase the chances of running into our new neighbors! At a few receptions we’ve hosted, I’ve appropriated the lyrics of [British band] Stealers Wheel and joked that the Kushners are to the left of me, Obamas to the right — and I’m stuck in the middle of the EU!”

The EU’s salmon-colored residence is down Belmont Road from the Obamas, who are renting a nine-bedroom, 8.5-bathroom Tudor-style home from Joe Lockhart, former press secretary to President Clinton. That road is now closed to through traffic, O’Sullivan said, but “the Secret Service does a great job to minimize any disruptions from that.” 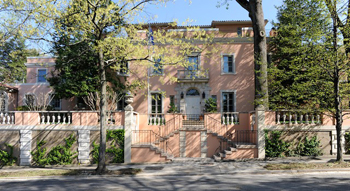 Photo: EU Delegation to the U.S.

Among the ambassadorial residences in Kalorama are the European Union’s residence, close to the Obamas.

O’Sullivan told us he understands the allure of Kalorama.

“Our residence is in a perfect location for us. It is close to the EU Delegation and many of the other embassies and residences,” he said. “It is convenient to Dupont Circle and Adams Morgan, so well-served with restaurants and shops. And being close to major roads like Massachusetts Avenue and Rock Creek Parkway, it is quick and easy to go anywhere we need, including the Hill.”

Maccario says it has “star power” in addition to being pretty, peaceful and steeped in history. “It’s not surprising it is a sought-after district for successful people and the international community,” she said. It has “old-world charm” that she says in some ways embodies the feeling of a “country village.” In addition, “the security is unbeatable, and it’s reasonably close to the best amenities and businesses that D.C. has to offer.”

For Trump and Kushner, another draw of the $5.5 million, 7,000-square-foot home at 2449 Tracy Place, NW, where they live might have been its proximity to TheShul of the Nation’s Capital, a synagogue run by Chabad, an Orthodox Jewish organization, according to the Washington Post. Observant Jews who don’t drive or use public transportation on Shabbat, the family is within walking distance of TheShul.

Kalorama’s appeal to the international community in particular is well established. Embassy Row is part of the neighborhood, after all. Embassies there include Algeria, Belize, Estonia, Greece, Japan, Latvia, Slovenia, Turkey, Madagascar, Mali and Syria. A variety of ambassador residences also call the tony neighborhood home — among them Afghanistan, the Netherlands and Portugal. 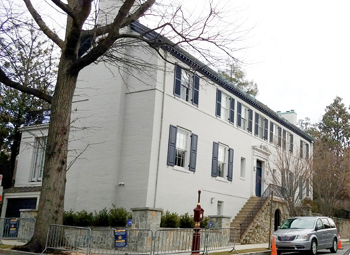 Want to get in on the action? The palatial French Residence, which sits on almost 2.5 acres of prime Kalorama real estate, is selling half an acre for $5.6 million. “It is possibly the first time in about 40 years that residentially-zoned land has been offered for sale in the neighborhood, according to a statement,” the Washington Business Journal reported on Feb. 15.

Besides political heavy-hitters and diplomats, about a third of Kalorama’s residents are technology executives and hedge fund workers, Bell said. But no one is blinking an eye over the fame of the newest neighbors.

“The neighborhood is very used to absorbing these types of people,” Bell said. “Those are the people that I deal with every day, and as I’ve said to someone recently, I’m in a lot of very important people’s bedrooms all the time, and they’re just like yours and mine.”

What’s more, he said, once the initial media craze dies down, no one will talk much about where anyone lives. He likened this current obsession to when the Clintons bought a mansion in Whitehaven, a neighborhood near Kalorama. Their 5,500-square-foot brick colonial sits next door to the Polish Residence and across the street from the Danish Chancery. It’s also located up the road from the Italian Embassy and a stone’s throw from the vice president’s residence off Observatory Circle. “We don’t really talk about where they lived now,” Bell said.

Kalorama is composed of two areas: Kalorama Triangle and Sheridan-Kalorama, also known as Kalorama Heights. The latter is where the heavy-hitters call home. A recent search on the real estate website Redfin showed 16 homes for sale ranging in price from $725,000 to $7.9 million. The average price of a home in the neighborhood is a little more than $3.5 million, and homes spend an average of 101 days on the market, according to Redfin. 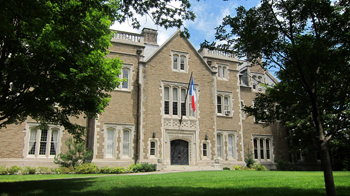 “Most people come to Kalorama because of the scale of houses architecturally,” Bell said. “They’re large houses, but they’re primarily intended to entertain and people generally have large families in these houses…. The neighborhood has some of the largest houses in Washington.”

Kalorama got its start in the late 1700s with a single estate called Belair, which was taken over in 1802 by diplomat Joel Barlow who renamed it Kalorama, which is Greek for “fine view,” the D.C. Historic Preservation Office states.

After the Civil War, the area began to grow and large mansions soon dotted the landscape. Besides being peppered with attractive old homes with massive square footage, Kaloroma, especially Kalorama Triangle, has a history of housing well-known residents. For example, five former U.S. presidents called Kalorama home before Obama followed suit. Here’s a look at who they were and what they did while they lived there.