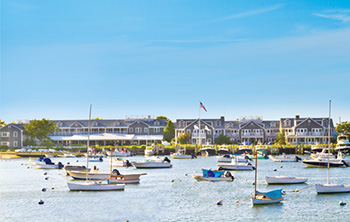 Nantucket’s harbor and distinct grey-shingle homes are seen from the vantage point of the White Elephant hotel.

In the 18th century, Nantucket’s wharves were bustling with harpoon-mounted ships and wind-swept sailors hauling in their precious cargo: sperm whales, whose oil was used in everything from lamps and soaps to pencils and perfume. The waxy substance — harvested from the whale’s head or from boiled blubber — fueled an industry that made the tiny island off Massachusetts the whaling capital of the world for over a century.

Horse-drawn carriages ferried oil casks and other goods into town, while the stench of chopped-up whale corpses permeated the air. The docks were lined with ramshackle fishing sheds and housed about 15 or so larger ships at any given time, along with a smattering of smaller boats. But out at sea, dozens of whaling ships scoured waters as far as the South Pacific and the Horn of Africa. A crew of 20 to 25 men, some as young as 14, would be away for two to even five years — as long as it took to fill their ships’ hulls — returning to their families for three to four months before venturing back out to sea.

It was a brutal, bloody but lucrative business. It also began to decline when oil was discovered in the grounds of Pennsylvania in the mid-1800s. The American Civil War and a massive fire that engulfed the town in 1846 cemented the island’s demise.

But Nantucket reinvented itself as a posh yet charming resort destination. Nowadays, on any given summer day, those same wharves that were once filled with the smelly remnants of whale carcass are teeming with 50,000 or so visitors — all eager to explore the island’s quaint cobblestone streets, trendy boutiques and restaurants, sandy dune beaches and meticulously preserved history. 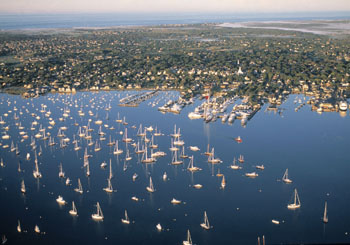 By the 18th century, the tiny island of Nantucket off Massachusetts was considered the whaling capital of the world. Today, it’s a playground for the wealthy that has retained its quaint charm.

The bulk of visitors comes from neighboring Boston and the East Coast, but they also hail from places as far away as Britain, Argentina, Japan and Canada. Last year, JetBlue added direct flights from D.C.’s Reagan National Airport to Nantucket, making the island a convenient getaway for Washingtonians.

The high season comprises the summer months but tourists begin streaming in during April. In fact, spring and fall are ideal times for those who want to avoid the large crowds and high costs.

While prices are somewhat lower in the spring, the island’s beauty doesn’t come cheap. (Nantucket, after all, has some of the highest home values in the U.S.)

One popular lodging option is the White Elephant hotel, which overlooks the harbor and exudes refined luxury and relaxation (accommodations start at $225 a night in April). Nautical themes, including oil paintings of ships braving rough seas, punctuate the 67 rooms, suites, garden cottages and in-town lofts. The décor is light and airy, with white shutters and columns, a soothing mix of neutral tones and tastefully decorated accents that lend a casual sophistication to the space.

The White Elephant is owned by Nantucket Island Resorts, which runs several other prominent properties on the island, including the award-winning Wauwinet and Jared Coffin House. The latter is a stately three-story brick mansion located steps from downtown that was built by Jared Coffin, a successful ship owner during Nantucket’s whaling heyday (the structure was one of the few to survive the great 1846 fire). 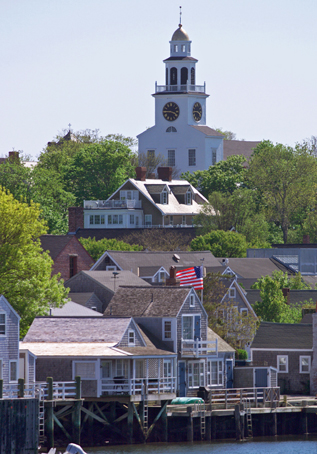 In addition, Nantucket Island Resorts owns White Elephant Village, an enclave of 20 family-oriented residences with one, two or three bedrooms. At either White Elephant property, guests can lounge in the garden and soak up the scenery or borrow a bike and navigate the bumpy cobblestone streets that meander through town.

There, they can explore high-end boutiques selling hand-woven baskets and other crafts or fishing shacks that have been transformed into swanky art galleries. Or they can dine at restaurants such as Proprietors Bar and Table, which highlights both local ingredients and international cuisine with dishes such as pork belly Kimchi pancakes and Spanish octopus in a chickpea stew — offering a level of dining (and price point) on par with top foodie destinations such as New York and L.A.

But Nantucket is about as far away from L.A. or New York — both in distance and in character — as possible. Over half of the island’s land, in fact, is reserved for conservation. The result is an idyllic, largely untouched landscape of gently rolling hills, pine forests and grasslands dotted with the occasional home, windmill or church.

The tranquility attracts not only urbanites looking for a quiet escape, but also celebrities and captains of industry, from Google’s Eric Schmidt to actress Reese Witherspoon to Patriots football coach Bill Belichick. Nantucket also capitalizes on its wealthy patronage when it does need to expand. A new hospital, for instance, estimated to cost $89 million, is funded not through taxes but entirely through private donations.

Indeed, Nantucket is a dichotomy of upscale pedigree and hardscrabble roots.

Nantucketers, a hardy lot that numbers around 10,000 permanent residents, are fiercely protective of their independence. They pride themselves on the island’s lack of development, unlike nearby Martha’s Vineyard, which they view as overly commercialized. They brag that no chains or big-box retailers operate on their island. The only one that does, a Polo Ralph Lauren store, caused such a ruckus when it opened over a decade ago that residents voted to ban all chains and large franchises from their downtown shops. 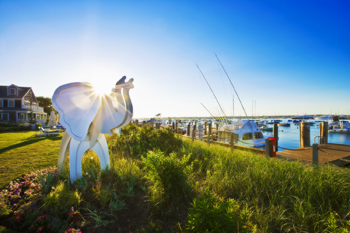 Residents constructing or renovating homes must also adhere to the strict diktats of the Nantucket Historic District Commission, which seeks to keep the island’s architecture uniform. That means all buildings, with a few exceptions, feature the island’s quintessential grey shingles. In reality, the shingles aren’t grey — they start off white. But in a few months’ time, saltwater erosion and wind beat them into a light grey. Hundreds of years earlier, white cedar shingles were chosen as the primary building materials simply because they were cheap and withstood the elements. Today, they’ve come to symbolize the island’s distinct coastal look.

Residents are also religious about preserving their storied past, much of which is on display at the expansive Whaling Museum, home to a 46-foot skeleton of a sperm whale. The famed 1820 sinking of the Nantucket ship Essex — which was rammed by a sperm whale, forcing the surviving crew to drift at sea for 95 days — served as the inspiration for the climatic battle scene in Herman Melville’s novel “Moby-Dick” and for Ron Howard’s recent film “In the Heart of the Sea.”

But beyond the legend of the Essex lies an even more fascinating history. Because Nantucket’s men were away for such long stretches of time, its women essentially ran the town — in an era when women were largely confined to the home. In fact, because the women managed the businesses along Main Street, it was nicknamed “Petticoat Row.” Mary Coffin Starbuck was instrumental in this evolution, introducing Quakerism to the island in the early 1700s, a religion that emphasizes gender equality and education. 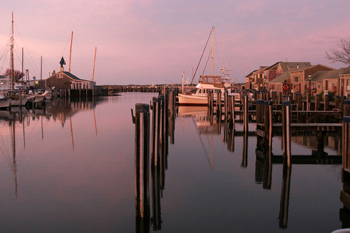 This progressive environment produced the first American — and first woman — to chart the course of an unknown comet, Maria Mitchell, who also became the first female astronomy professor in the U.S. It also produced a cosmopolitan trading hub that welcomed sailors from far-flung nations around the world.

While its fortunes dried up with the demise of whaling, Nantucket found newfound prosperity as a retreat for the rich and a haven of history. Indulging in a five-star meal or taking a leisurely bike ride along homes adorned with trellises of roses is a far cry from the punishing routine Nantucket’s original inhabitants endured, when men traversed the high seas to spear whales into an exhausted, violent death, then dragged their corpses back on board to butcher and burn the remains.

The island has arguably changed for the better. Yet meandering through alleyways seemingly frozen in time or feeling the gust of winds whipping your face as you stand on the dramatic bluffs overlooking the Atlantic, visitors get a sense of the entrepreneurial spirit and perseverance that helped Nantucket not only survive through the years, but also thrive.