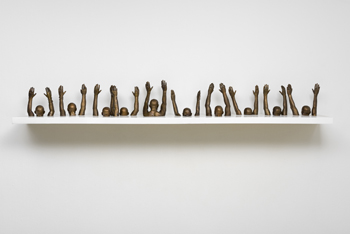 “It Takes a Nation” reflects on racism in America through pieces such as Hank Willis Thomas’s “Raise Up.”

The bold and provocative graphic style of Emory Douglas, the former minister of culture for the Black Panthers, created a visceral record of the racist atrocities of the 1960s and ’70s in a visual language that anyone could understand. A young black boy holding aloft the scales of justice, police depicted as pigs walking on their hind feet and defiant black protesters armed with rifles are among Douglas’s provocative images.

The same struggle against police brutality and a litany of racially tinged social injustices continues today, with the Black Lives Matter movement protesting the police killings of unarmed black men across the country. A timely exhibition at the American University Museum explores the ties that bind Douglas to black artists who followed him in “It Takes a Nation: Art for Social Justice with Emory Douglas and the Black Panther Party, AFRICOBRA, and Contemporary Washington Artists,” on view until Oct. 23.

Most people remember the Black Panther Party for Self-Defense as diametrically opposed to the non-violent protests organized by Rev. Martin Luther King Jr., a militant movement of armed black men and women who were infiltrated by the FBI because they terrified white society. But the Black Panthers formed in response to the blatant racism and police brutality of the times. Only a small number of their followers carried guns and did so in compliance with local laws. Formed in 1966 in Oakland, Calif., the organization also included women in prominent roles, a free breakfast program that fed more than 10,000 poor children and a 10-point plan calling for the “power to determine the destiny of our black community.” 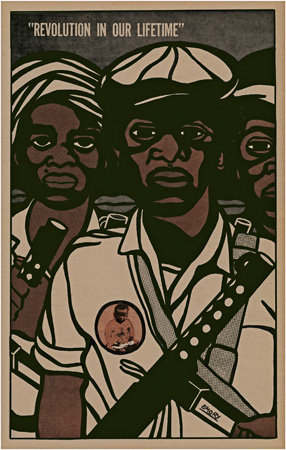 Emory Douglas’s “Revolution of Our Lifetime”

Douglas, who is still creating art, oversaw production of the Black Panther newspaper that reached more than 400,000 people at its peak. In a previous interview, Douglas said his stark cover illustrations were designed to reach an audience that included many illiterate people. He often used black ink and only one other color because of the newspaper’s shoestring budget.

At the American University Museum, Douglas’s illustrations offer a searing indictment of the social conditions facing black America that unfortunately still exist today. He often depicted children to echo his concerns about the fate of future generations. In one illustration, a black boy holds a placard stating, “U.S GOV’T – STOP KILLING BLACK PEOPLE NOW!!!” Another cover illustration shows a crying black soldier, his helmet filled with images of riot police, beneath a sign stating “OUR FIGHT is not in VIETNAM.” In another image, grim-faced black men and women holding machine guns stand beneath the slogan “REVOLUTION IN OUR LIFETIME.”

The exhibition also includes work by AfriCOBRA, the African Commune of Bad Relevant Artists founded by black artists in Chicago in the 1960s. In “Revolutionary,” Wadsworth Jarrell’s psychedelic style of contrasting colors and curving bubble text portrays the fiery civil rights leader Angela Davis. Another painting called “Liberation Soldiers” depicts leaders of the Black Panther Party in the same style, lionizing black men who were despised by many whites at the time. In “Revolutionary Suit,” Jae Jarrell — a fashion designer, artist and Wadsworth’s wife — created a sensible wool blouse and skirt that would fit in at most offices, except for the gold bandolier filled with rainbow-hued bullets that resemble sticks of paint or lipstick, illustrating how the power of art rebelled against the conservative roles assigned to women in the 1960s. 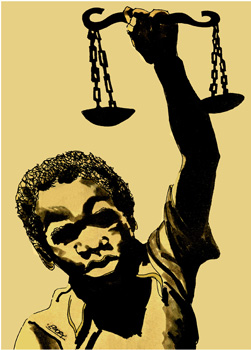 The weakest element of the exhibition is the work by 15 contemporary artists. Many of the pieces display a more nuanced and intellectual approach that is bound by the conventional parameters of the art world, but they lack soul and don’t strike the conscience as social protest or challenge viewers about their own biases. That may be a mirror of the times, where the Black Lives Matter movement has lacked central leadership or clearly articulated goals other than an end to police brutality. How will that be accomplished? No one is providing the answer or even a path in the right direction.

There are a few exceptions. A 2014 bronze sculpture called “Raise Up” by New York artist Hank Willis Thomas shows the upper torsos of men with their hands raised, echoing the “Hands Up, Don’t Shoot” mantra from the riots and protests following the police shooting of unarmed teen Michael Brown in Ferguson, Missouri. The figures appear to be sinking, or rising, from a white ledge, their backs turned to the viewer, anonymous figures defined by their forced submission rather than their humanity.

In an installation called “Power in the Blood” by D.C. artist Holly Bass, visitors are invited inside the skeletal wooden frame of a house to watch videos projected onto sheets. In one video, Bass interviews her father in a cotton field about his younger days picking cotton in rural Georgia. But he speaks in a matter-of-fact tone without traces of bitterness about the backbreaking labor, including one day when he picked 214 pounds of cotton working from sunrise to sunset. In the other video, Bass dances on the porch of a dilapidated house, which might represent a slave cabin or sharecropper’s home, in a white dress. She dons muddy boots, reminiscent of the work in the fields, with audio of her singing the traditional folk song “Pick a Bale of Cotton,” which is considered racist by many people today even though it was popularized by black blues great Lead Belly. The daily toils that are considered commonplace by one generation shock the sensibilities of the next. If nothing else, that is a sign of slow progress.

It Takes a Nation: Art for Social Justice with Emory Douglas

and the Black Panther Party, AFRICOBRA, and Contemporary Washington Artists