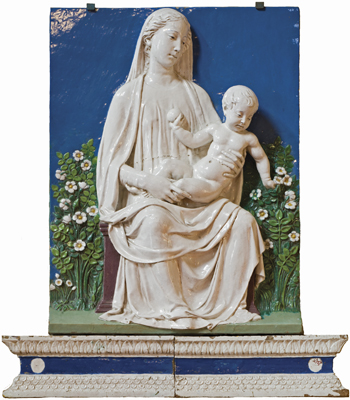 When curators at the National Museum of Women in the Arts began planning a comprehensive exhibition representing the Virgin Mary last year, they had plenty of material from which to choose.

After all, the mother of Jesus — arguably the second most-important person in the Bible — is one of the most popular subjects in Western art, and has been for centuries. “Picturing Mary: Woman, Mother, Idea” at the National Museum of Women in the Arts (NMWA) is not just an inspired idea for an exhibition that is sure to draw large crowds, but a particularly impressive collection of iconic pieces.

The tightly focused but comprehensive exhibition combines more than 60 paintings, sculptures and textiles from the Vatican, major museums, churches and private collections throughout Europe and the United States. Well-known Renaissance and Baroque artists, including Botticelli, Dürer, Michelangelo, Pontormo, Gentileschi and Sirani, are represented in an array of immaculately preserved masterworks.

Of course, female artists are also represented. Artemisia Gentileschi, widely considered the most important woman painter before the modern period, was the first woman to run a large studio. Her “Madonna and Child” depicts Mary as a nurturing peasant, a remarkably humble conception in simple clothes. Elisabetta Sirani’s “Virgin and Child” also portrays Mary as an everyday figure, not the ethereal image so often associated with the mother of Jesus. She wears a turban favored by Bolognese peasant women and gazes adoringly at her cherubic baby.

“Although women artists during the Renaissance and Baroque periods were expected to focus on still life or portraiture, ‘Picturing Mary’ demonstrates the intriguing ways in which women artists engaged with the narratives and symbolism that developed around the subject of Mary,” NMWA Director Susan Fisher Sterling said in a statement accompanying the exhibition’s opening. “Both female and male artists contributed to the rich and varied visualization of Mary in these periods.”

The NMWA exhibition deftly reflects a range of identities associated with the Virgin Mary — the young, nubile and infant-focused mother; the active, bustling mother as part of a community; the suffering, bereaved mother; and even the angry, aggressive matriarch.

“Rest on the Flight into Egypt” is the first large-scale work by the Italian Baroque master Michelangelo Caravaggio and one of the most visually arresting pieces in the exhibition. Working from a Middle Ages legend about Mary, Joseph and Jesus fleeing into Egypt to seek refuge from King Herod, who sought Christ’s death, the piece is placid in mood, but actually quite complex. An angel plays the violin as a drably dressed Joseph holds sheet music. Meanwhile, a serene Mary, dressed in a bright, flowing red robe, cradles baby Jesus. The juxtaposition of workmanlike Joseph, who is flanked by an ox, and Mary, who is enveloped in lush flora, is striking.

In one of the earliest works in the exhibition, Puccio Capanna, a student of Giotto di Bondone, depicted an enthroned Mary as Queen of Virgins surrounded by female saints, alluding to the enduring symbol of Mary as a model of virtue and faith for all women. Oddly, though, for a museum dedicated to empowering women, it fails to include any pieces that might critique patriarchal dogma surrounding Mary, who for centuries has been touted by the Church as the feminine ideal: a maternal giver who is sexually and morally pure. 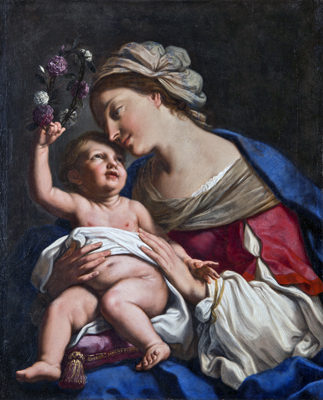 Elisabetta Sirani’s “Virgin and Child is among the over 60 works depicting the Virgin Mary in an expansive new show at the National Museum of Women in the Arts.

The exhibit does illustrate the evolution of Mary over the years, from the early regal depictions of her to the approachable, empathetic persona that began to take hold in medieval monastic communities.

Andrea Pisano’s marble sculpture, “Madonna and Child,” is among the most intriguing pieces in the exhibition primarily because it shows some levity, as opposed to the endlessly solemn and reverent depictions of Mary and the Christ child. The sculpture depicts Mary not only holding her infant, but apparently tickling him. A smile is evident on the lips of both. When was the last time you saw a picture of a smiling Jesus? Never? The effect is intensely humanizing.

While most of the works in the “Picturing Mary” exhibition depict Mary as maternal and gentle, some show the mother of Jesus as a fierce warrior. The exhibition’s excellent accompanying book explains that Mary’s identity as Queen of the Virgins gave rise to the notion that female virgins have access to realms normally reserved for men, including warfare and hunting. “Madonna delle Milizie” on loan from the Church of Sant’Ignazio in Sicily shows Mary astride a rearing horse, with a golden sword unsheathed and people trampled underfoot. Perhaps not surprisingly, none of the works depicting Mary as an aggressor include an accompanying baby Jesus.

“Picturing Mary,” a meticulously curated, academic look at centuries of art honoring the Virgin Mary that offers many exquisite, comforting images of the iconic biblical figure, but also some novel ones that challenge her rather staid image.