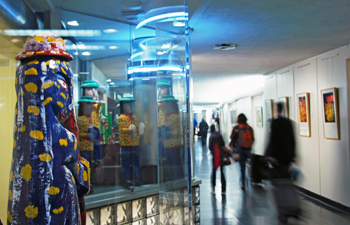 More than 50 mixed media works by Latin American artists from 17 countries are on display at Ronald Reagan National Airport’s Terminal A in the first-ever exhibit of Latin art ever held at the airport.

The ground level corridor in Reagan National Airport’s Terminal A, facing the circular roundabout, is packed with fast-moving travelers tugging along suitcases. But now and then, one stops mid-stride to look at the wall adorned with pictures and glass displays showcasing colorful crafts.

Along the airport’s Gallery Walk are 56 works of mixed media by Latin American artists from 17 countries. Organized by the Inter-American Development Bank Cultural Center and the Metropolitan Washington Airports Authority’s Arts Program, “Art + Craft: Celebrating the Creativity of Latin America” is the first-ever exhibit on Latin art held at Washington National Airport.

“Our mission is to democratize access to the arts, and so here in D.C. we bring Latin and Caribbean culture to the public,” said the IDB Cultural Center’s Debra Corrie, who’s the exhibit curator. And there is no better place than an airport to attract attention.

The exhibit focuses on the blurring line between artists, who create work primarily for aesthetics, and artisans, who create pieces that are functional.

In “Seated Woman with Two Children,” Paraguayan artist Virginia Yegros blends function with form, as arms morph into handles. “So you get the transition from a pot to a figure, and there’s actually a hole in the top of the vessel to carry or store water,” said Corrie. “Several of the pieces in our collection retain this utilitarian quality even though they are figurative.”

The exhibit shows off the variety of materials used across Central and South America, from wood and clay to tin and textiles. Carlomagno Pedro Martínez uses the black clay readily on hand in Oaxaca, Mexico. “Canoe with Devils” and “Death Carriage” are phantasmagorical scenes with skeletons riding a bull, pulling a wagon, and paddling a boat while leaving behind a trail of skulls. It is “serious with a lighthearted look,” said Corrie.

Masks of weird and wild creatures add a playful aura to the airport walkway. One standout is a pink face, by Peruvian artist Juana Mendívil, with protruding red ears, spirally horns and a large spider smack in the middle of the forehead.

Other pieces are playful because they evoke Christmas gifts for children, such as polychrome wood-carved toys — a rocking horse and dog — by Guatemalan artists and a uniquely Latin-flavored candelabra in turquoise, red, pink, yellow and green. 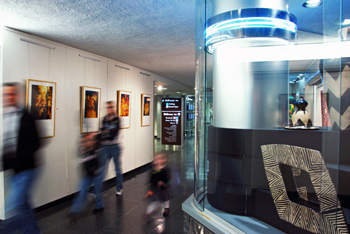 Others convey overtones of distinct sadness, such as Costa Rican printmaker Francisco “Paco” Amighetti’s “Tropico,” a two-toned color woodcut. Against a bluish-green background, an ochre-hued man in a sombrero stares silently at the woman facing him, while black vultures in the distance peck in spare fields.

“I mixed in this piece because it has the flavor of Central America and it seems close to artisans’ work because a woodblock print is hand-carved and hand-printed,” Corrie explained. “It makes me think of someone working materials with their hands.”

It’s difficult to distinguish between artists and artisans, and perhaps one shouldn’t do so anyway. Labels can so easily mislead. And many functional items in daily life are designed with an eye toward aesthetics, possessing both visual beauty and practical use.

Indeed, many of the pieces on display are undeniably striking. “Manzana” by Chilean photographer Alexandra Edwards is at first an optical illusion of a strangely shaped apple. But on second glance, it is a yellowish apple with an upright stem floating in water, with only the upper crescent of apple visible above the water’s surface. But the image melds with its reflection and the resulting shape is a surreal apple that surprises viewers.

“Drying in the Sun,” a linoleum cut by Alfredo Benavides Beda, recalls Roy Lichtenstein’s cartoonish black-outlined drawings. Here, the front wheel of a bicycle is hanging by two clothespins from a laundry line — an almost comical sight in the midst of a frenetic airport.

Indeed, this unique airport exhibit offers the harried traveler a colorful visual break from the glare of monochrome airport terminal lighting and an entertaining peak at Latin art and culture.