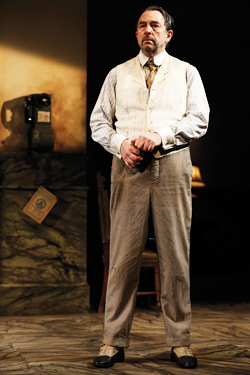 Richard Schiff deftly portrays a down-and-out petty gambler who imposes himself on a night clerk (played by Randall Newsome, photo at left) in the Shakespeare Theatre Company’s production of “Hughie.”

One of Eugene O’Neill’s last and lesser-known works, “Hughie” comes alive at the Shakespeare Theatre in a stirring production directed by Broadway veteran Doug Hughes. The script is iconic O’Neill — the characters and plot are characteristically gloomy — but it differs markedly from his other plays because it is compact and intermittently funny.

It’s as if O’Neill, in his later years, gained a more rounded life perspective that allowed a smidgen of humor to seep through his melancholy-colored glasses. In “Hughie,” he wrote a leaner psychodrama that offers a comical, mocking narration of the ominous plot.

A two-man play set in 1928, “Hughie” is a character study of Erie Smith, a down-and-out, has-been petty gambler who imposes himself on Charlie Hughes, a night clerk in a seedy Times Square hotel. In a long-winded monologue, Erie relentlessly rants and bemoans his grief over the death of the former desk clerk, Hughie, who quietly validated Erie’s larger-than-life confidence. Charlie’s disinterest and disdain for Erie is ignored. Only the audience is privy to Charlie’s inner thoughts — written as stage directions by O’Neill. In this production, Charlie’s sarcastic inner discourse is presented as a voice-over narration, an ingenious decision on the part of director Hughes.

O’Neill’s plays feature characters with many layers and contradictions, which make them disturbingly realistic and honest. “Hughie” is no different. It’s not enough that Erie’s character is wretched because he is a bitter, egotistical, aging alcoholic whose luck has run out, and he lost what appears to be his only friend. What’s worse is Erie’s biting condemnation of that friend for liking him. “He was just a sucker,” he says over and over of the dead desk clerk. “The bigger I made myself, the more he lapped it up.” By discrediting Hughie, who idolized him, Erie robs himself of self worth.

Richard Schiff (aka Toby Ziegler on “The West Wing”), as Erie, expertly walks the fine line between despicable and pitiable, undoubtedly what O’Neill intended. Although Erie is a transparent crook and liar, he’s vulnerable enough to feel for. Yvonne Shafer, in the Shakespeare Theater’s Asides magazine, quotes O’Neill as saying that his plays “suddenly strip the secret soul of a man stark naked … with an understanding compassion which sees him as a victim of the ironies of life and of himself.” He definitely did this with the character of Erie.

Randall Newsome, who plays the night clerk, with his few lines and revealing body language, exposes another broken soul who wants to escape from his dead-end, depressing job that requires subservience to the likes of “492” (his reference to Erie’s room number). 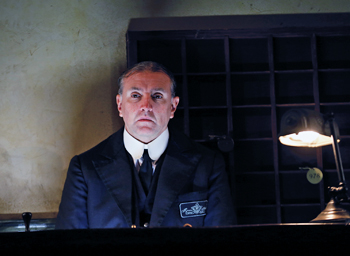 The play is fastidious and haunting, with the drama taking place between three and four in the morning — “in that twilight region known to all of us who have suffered a loss,” said Hughes. Set designer Neil Patel’s credible creation of a derelict hotel lobby that used to be grand, but is now severely neglected, fits the mood perfectly. Grime covers the transom windows, the marble wainscot is dim from years of cigarette smoke, and paint is peeling off the walls. The realistic soiled world that the set evokes makes Erie’s fantasies of grandeur even harder to bear. Meanwhile, Ben Stanton’s dramatic lighting shifts play with the audience’s perceptions. At one point, Erie sits dejected in a spotlight and we fixate on his silhouette, which implies he’s a mere shadow of a man.

The production also uses video to propel Erie’s story along. A hanging cityscape on a wall and the windows turns into video screens where we see Erie’s hometown, his first girlfriend, and images of him smoking; then they go black again. Did we imagine them? Director Hughes refers to this as “fluid imagery.”

“There’s a way in which O’Neill expands time in the play in order to look at things from a variety of angles,” he explained. “[O’Neill] dreamed of a form of theater that could incorporate all of these elements — the voice that one hears in the stage directions, the images that haunt these men.”

“Hughie” was to be one play in a cycle of plays by O’Neill called “By Way of Orbit.” In each play, there would have been only two characters, one of which would be recently bereft of somebody crucial in their lives. O’Neill’s subsequent plays were never completed; “Hughie” was published posthumously in 1959.

“Hughie” illuminates a small moment in time of a man we wouldn’t notice if we saw him on the subway; yet, the play begs universal questions. It’s curious that Hughie is the name of a deceased guy we never meet, yet the importance he has in Erie’s mind is enough to build an entire play around. Did Erie make Hughie up? Is he another embellishment of a half-truth he’s told so many times that he believes it himself? And more important, what makes something real and what makes it a fantasy? If we think it to be true, is it? If the answer is yes, this is a glimmer of hope O’Neill gives us — the only one to hold onto in this lonely emotional gem.