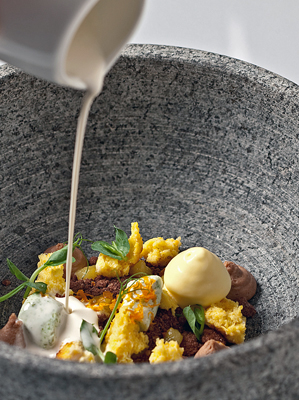 In January, Ivan Iricanin opened his first restaurant in D.C., Ambar, finally realizing his wish to give Washington-area diners a chance to sample the cuisine of his native Serbia. Knowing that Balkan cuisine — especially in its purest traditional form — might be too much for American palates, even in an internationally savvy city like Washington, Iricanin decided to give his menu a modern twist.

Iricanin had help from his partner chef/restaurateur Richard Sandoval and friend and colleague Kaz Okochi. The team that created the popular restaurants Masa 14 and El Centro have been successful at introducing new cuisines to the area and knew what they had to do with Ambar.

To create the right menu, last summer Iricanin took a tasting trip to the Balkans, where he immersed himself in the cuisine while looking for the right staff to lead the kitchen. He discovered a creative young chef in Belgrade who was already reinterpreting traditional Serbian dishes through a modern filter at his restaurant Mala Fabrika Ukusa (which translates to Little Factory of Taste). The team invited chef Bojan Bocvarov to take on the challenging job of transforming the protein-rich, fat-laden cuisine of Serbia and the Balkans into dishes that would be accessible to American diners.

To offset the heaviness of some of the region’s cuisine, Bocvarov has opted for a smaller plates menu that divides into several major categories: soups and salad; breads and pastry; vegetables; meats; and seafood. While some of the dishes are derived from traditional Serbian fare, the menu is more broadly focused on Balkan cuisine.

An amalgam of culinary styles that reflect the complex cultural heritage of the area and its location as a gateway between East and West, Balkan cuisine encompasses elements of Mediterranean, Middle Eastern and Northern European traditions.

Instead of serving large pieces of meat with an accompanying salad — typical in many European households — Bocvarov builds dishes that bring the two elements together into a single, artful presentation. Rolovana prasetina, for example, is made of paper-thin slices of pork roulade served atop a salad of arugula, caramelized apples and pork cracklings, with apricot jam and the barest tracings of horseradish dressing. The Balkan burger is an open-faced sandwich topped with a spread of cheese, garlic and ajvar — roasted eggplant and red pepper jam — while below the meat is sandwiched with tarator and chopped cucumber salad.

There are many alternatives to the meat-based choices, making Ambar a better option for vegetarians than most places. The gibanica is a phyllo cheese pie, served throughout the Balkans, paired with a chunky tzatziki-like cucumber yogurt salad and red pepper spread. The roasted mushroom crepe, or sumske pecurke, is filled with chunks of firm mushrooms in a rich béchamel, topped with Gouda and accented with red pepper emulsion. It is a delicate and refined dish that’s emblematic of how Ambar elevates traditionally hearty fare.

Ambar also offers several soups, two of which are particularly notable. The white veal soup tastes quite a bit like a liquid veal stew. The butternut squash potage, dressed with leek mousse, porcini dust and pumpkin seed oil, is rich but not heavy, with each spoonful a delightful play of flavors. 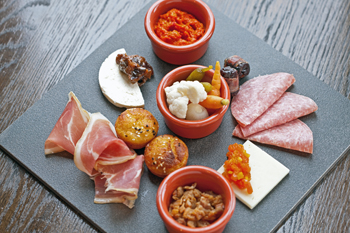 Each dish on Ambar’s menu is carefully designed and meticulously plated, the presentation almost as much a statement as the taste. Grilovane punjene sljive —bacon-wrapped prunes stuffed with goat cheese in a blueberry balsamic reduction — arrive at the table on individual wooden skewers stuck into a chunk of rock. Pale-pink baked shrimp nestle on a boat of bright green spinach risotto with a sail of brown bread crisp, all swimming atop a dark nori-chive butter pond (well, actually, a puddle). And the grilled asparagus — blanketed in veloute and paired with furled crispy prosciutto slices, pumpkin and purple potato squares, and halved quail eggs — looks as though it was created by a Cubist master.

Iricanin and Sandoval have gone to considerable effort to create inventive, refined Balkan dishes with a broader appeal, but for some they may have gone too far. A few of the dishes seem to have lost the essence that made the traditional version special, leaving behind just one more clever appetizer. While the food is unquestionably delicious and beautifully prepared, at times it’s more chic urban cuisine than anything Balkan per se. Sometimes you just want a big plate of rich food. And that’s always been one of the charms of the region.

Artistry aside, taste is abundant in plenty of the dishes. And interestingly, perhaps the single best dish on the menu is the humble stuffed sour cabbage, or sarma, which is one of Ambar’s most traditional offerings. In fact, the recipe comes from the general manager’s grandmother. Two cabbage rolls served in a small pot are filled with smoked pork, beef and jasmin rice, flavored with bay leaf, and slow-cooked in a large pot surrounded by smoked meat for many hours to create an intense flavor. Unlike the more familiar Polish version, this cabbage is cured yielding a very different yet delicious overall effect. The dish alone is worth the trip. 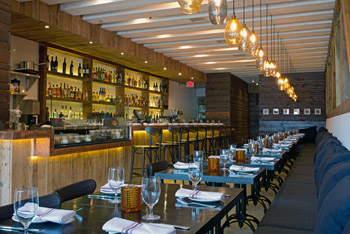 Iricanin has rounded out the team of his countryman with pastry chef Danilo Bucan, a colleague of chef Bocvarov’s from Serbia. His creative genius with sweets is an excellent match for Bocvarov’s skills on the savory side. Though the dessert menu offers only half a dozen choices, the amount of inspiration packed into them is remarkable.

One of Bucan’s creations, the forest gnocchi, is a standout. A round, deep-sided soup bowl is filled with tiny dollops of rich chocolate mousse, small chunks of intense bitter orange cake, sweet ground chocolate, citrusy orange gelee, herbal tarragon gnocchi and tart passion fruit foam — all served with a pitcher of black tea-flavored cream sauce. The dish is as delicious as it is unlikely, with each bite yielding a complex tapestry of flavors and textures.

Ambar attends well to the liquid side of the meal with an international wine program featuring more than 50 wines focusing on labels from Serbia, Macedonia, Slovenia, Montenegro, Bosnia and Herzegovina, and Croatia. Ambar also introduces the region to a traditional Balkan drink in Washington’s first-ever Rakia Bar. More than 30 varieties of the alcoholic beverage, distillations of a wide range of fermented fruit, give diners the opportunity to taste the national drink of many Balkan nations, including Serbia, straight up or in some very fanciful cocktail concoctions. One of those, the Podgorica, is a sweet-spicy tropical blend of grape-based rakia, aji amarillo, passion fruit, mango and lime. The Skoplje combines mezcal and pear rakia with spiced pear puree, sour mix and lime for a tart and smoky effect.

Iricanin selected the former Jordan’s 8 space on Capitol Hill’s Barracks Row to open Ambar, a bold move considering that the area is not well known as a proving ground for exotic cuisine. He brought in Branimir Lukic of the Serbian-based architectural firm Atelje AL to rework the somewhat awkward long, thin space. Lukic went blond with his design. Lots of raw honey and toast-colored wood, a copper-top bar, soft lights, and cream-colored paint and tile walls create an appealingly warm, golden glow in the 3,000-square-foot restaurant.

The glow extends to the people. The staff is excellent, friendly, knowledgeable and ready to assist with explanations and pronunciations. Many of the staff are from Serbia, in fact, and it’s a pleasure to be helped by people with such an evident affinity for their native cuisine. And unlike many other small plates venues, Ambar seems to have already worked out the inevitable timing issues. After several visits, we saw few awkward delays.

With eclectic music and a cool vibe, Ambar is primed to attract young urbanites from the area but its appeal is much broader. The food is excellent. It is also refreshingly unusual and exotic, yet retains hints of the homey traditions on which it is based. And Balkan food may have just found a welcome new home in Washington thanks to Ambar.