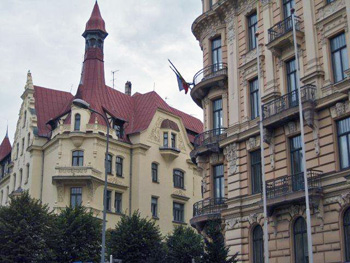 It wouldn’t be a stretch to say that Washington’s art culture would not be what it is today without the efforts of Alice Pike Barney and her studio, now home to the Embassy of Latvia. The efforts of the 20th-century artist and socialite will be remembered by the embassy in the exhibition “Comparisons in Jugendstil and Spanish Mission Private Residences,” opening Sept. 17.

The Jugendstil apartment house in Riga is stunning example of art nouveau architecture and design, as seen in its spiral stairway below.

A collective effort by the Latvian Embassy, Riga Art Nouveau Museum and Smithsonian Institution, the exhibit will compare the Alice Pike Barney Studio House, designed in a Spanish colonial revival style on D.C.’s Sheridan Circle, to a house built in the Jugendstil, or art nouveau, style that is so prevalent in the Latvian capital of Riga.

The two buildings have a lot in common: Both were built in 1903 as private residences, both contained art studios, and each influenced the style of architecture in their respective cities, where they remain artistic gems.

Barney, born in Ohio in 1857, was an avid supporter of the arts, and she wanted to bring the Parisian art salons she’d seen during her extensive travels in Europe to D.C. In 1902, she began construction on the house that would serve as an outlet for her artistic passion, hosting events such as lectures, theatrical productions, teas and dinners.

“She wanted to design her dream house and entertain Washington society,” said Amy Ballard, senior historic preservation specialist at the Smithsonian Institution. “She was one of the unsung heroes of the early Washington art scene.”

The idea for the exhibition began when Ballard found some duplicate photos of the Barney Studio House while browsing through some old Smithsonian archives.

“I thought, maybe the Embassy of Latvia would like to have these — interior shots of the house they now occupy,” said Ballard. 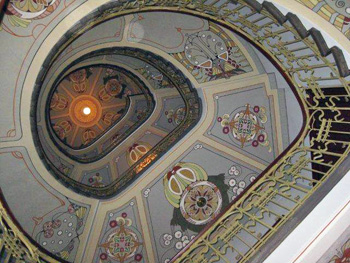 Spiral stairway of the Jugendstil apartment house in Riga

She received a phone call a few weeks later asking if she’d like to come by and meet with Ambassador Andris Razans to discuss the house. He and his wife, Gunta Razane, wanted to organize something to showcase the residence that had housed their country’s embassy in the U.S. since 2001 and its little-known history as a fixture of the Washington art scene.

After her death in 1931, Barney bequeathed the house to her daughters, who in turn eventually donated it to the Smithsonian for use as an arts center. In 1999, the Smithsonian sold the house, which was in need of structural repairs, to a private buyer, and in 2001, the Latvian government bought the property. The embassy subsequently renovated the building, which is listed on the National Register of Historic Places, while retaining many of its original features.

“The embassy paid so much attention to the history and architecture of the house when they were renovating it,” said Ballard. “It reflects the strong preservation ethic in Latvia.”

Latvia, in fact, is renowned for the striking art nouveau architecture that graces its capital city, where some 40 percent of the buildings bear the hallmarks of the art nouveau movement: natural forms and structures, curved lines and asymmetrical compositions.

The exhibit will feature photographs of a prime example of this architectural heritage: the Jugendstil apartment house, which is now home to the Riga Art Nouveau Museum. The residence was originally owned and designed by Konstantīns Pēkšēns and Eižens Laube, and not unlike the Alice Pike Barney Studio House, it also served as a haven for artists. 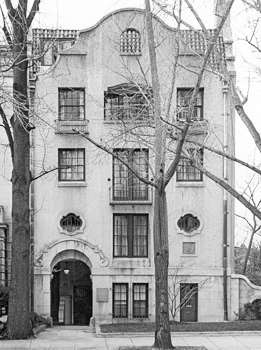 A new exhibit at the Latvian Embassy compares the Alice Pike Barney Studio House, the historic property that now houses the embassy.

The house is itself a work of art, boasting elaborate features such as high bay windows, a dramatic spiral staircase, stained glass windows, a corner turret and giant entry portals. It also includes touches of renaissance, medieval and romanticism design elements. Typical of the art nouveau style that swept through Riga and other European cities, Pēkšēns’s building on Albert Street was inspired by aspects of nature and depicts animal and floral motifs such as ants, pinecones and squirrels.

Pēkšēns himself is considered to be one of the most influential architects in the country’s history and designed more than 250 brick buildings in Riga. The famous architect had his apartment and studio on the ground floor of the Jugendstil house until 1907. Art nouveau’s most well-known Latvian artist, Jānis Rozentāls, also lived and worked in the building from 1904 to 1915.

Alice Pike Barney would’ve appreciated the connection. She, too, believed art needed a home from which to spread its influence.

Born into a wealthy Cincinnati family, Alice Pike dabbled in the arts herself, honing her skill through her trips to Europe before and after marrying Albert Barney in 1876. She moved to D.C. in 1889 and shortly before Albert died, Alice decided to start designing her studio house with the help of architect Waddy Butler Wood.

The carefully designed home featured intricate wood balconies, performance stages and glass windows. Alice furnished the residence with pieces that reflected her own varied interests, including Venetian glass, oriental rugs, pillows and artworks she’d collected during her travels. At the studio house, her guests ranged from President Theodore Roosevelt to famous actress Sarah Bernhardt. One of these get-togethers led to the preliminary planning for the National Sylvan Theater on the grounds of the Washington Monument — ensuring that Barney would leave her stamp on the city whose arts scene she helped to nurture.