Also See: ‘Capital’ and ‘About Time’ and Repertory Notes

Emma (Léa Seydoux), left, and Adele (Adèle Exarchopoulos) navigate the ups and downs of love in Abdellatif Kechiche’s “Blue Is the Warmest Color.”

“Blue Is the Warmest Color,” the latest masterpiece from French-Tunisian writer-director Abdellatif Kechiche (“The Secret of the Grain,” “Games of Love and Chance”), marks his eagerly anticipated return to form after the disappointing performance of “Black Venus,” which made only a modest impact. Though well done, his 2010 biopic of the tragic life of Saartjie “Sarah” Baartman, a Khoikhoi woman from South Africa exhibited and exploited as the “Hottentot Venus” in Europe in the early 19th century, struggled to find distributors and audiences with its challenging subject matter.

Kechiche doesn’t shy away from notoriety with “Blue Is the Warmest Color,” the powerful tale of a young heroine coming of age and developing her identity in a long-term lesbian relationship, portrayed rather explicitly. Kechiche transports the viewers to another fascinating world, adroitly lensed by director of photography Sofian El Fani, where we enjoy spending our time so much that we do not want to leave, even though the movie’s running time is three hours. More than just a rebound, the film was the talk of the 2013 Cannes Film Festival, where it claimed the critics’ FIPRESCI Prize and the prestigious Palme d’Or.

The Cannes jury awarded the Palme d’Or to Kechiche as well as to his two French lead actresses, Adèle Exarchopoulos and Léa Seydoux, the first time the prize for best film officially recognized actors as well as the director. The leading ladies’ memorable turns certainly deserved such a historic honor. In Exarchopoulos’s breakthrough performance as the film’s young heroine, she must live in all of the scenes, frequently baring her soul up close and personal. She’s a natural at depicting a range of emotions with unexpected authenticity. Playing against a younger costar, Seydoux (“Midnight in Paris,” “Inglourious Basterds”) shines in a new light as a grown-up character.

The audience first sees Adèle (Exarchopoulos), a smart, inquisitive 15-year-old, in a high school classroom in Lille. There, the teacher speaks about Pierre de Marivaux’s classic unfinished novel “La Vie de Marianne,” which focuses on a female narrator weighing her perspectives and emotions — a book that influenced the film.

A pretty girl, Adèle likes Thomas (Jérémie Laheurte), a handsome, appealing classmate who is also completely into her. But what in theory should be an ideal relationship doesn’t last long, as she finds something is lacking. She can’t keep her mind off a blue-haired girl she saw on the street and imagines the two of them passionately together in bed. In a lesbian bar, Adèle later meets the blue-haired Emma (Seydoux), an assured college art student who’s a few years older. Over the next decade, we witness the development of their beautiful love story, a relationship eventually challenged by differences in class, taste and temperament. 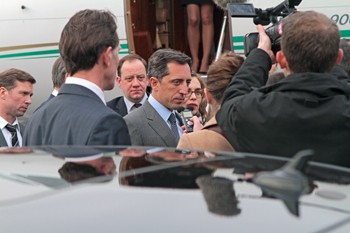 Gad Elmaleh portrays a Machiavellian bank CEO who does whatever it takes to get ahead in “Capital.”

In today’s world dominated by international finance, a financial thriller is not so different than an old-school political thriller. And “Capital” is not Costa-Gavras’s best work, but it’s still well directed and worth seeing. Costa-Gavras has a reputation for being a man of action, with impressive talents for the visual expression of ideas; here, they are put into place on screen by Eric Gautier’s cinematography and propelled by Armand Amar’s nervous score. Briskly paced, “Capital” tones down the solemnity a tad with touches of gallows humor.

After Jack Marmande (Daniel Mesguich), the CEO of France’s Phenix bank, is stricken with illness on the golf course, his subsequent hospitalization makes him unfit to continue serving publicly as the bank’s head. He and the bank’s board of directors designate his young deputy and ghostwriter Marc Tourneuil (Gad Elmaleh of “Midnight in Paris,” “Priceless” and “The Valet”) as the new CEO, intending him to be a puppet who looks and sounds good, while the old CEO and board continue to pull the strings. As the board only thinks of Tourneuil as an interim CEO, they tender him a correspondingly low salary, “only” 1.8 million euro. Offended, the young Turk openly scoffs at their offer, demanding much more, to the shock of the crusty board members.

Once officially appointed, Tourneuil intends to keep his job for good and run the company his own way. He’ll earn his negotiated bonuses based on huge growth in profits and stock prices, which he achieves by fierce rounds of cost-cutting and layoffs anathema to “French values.” To make his money, Machiavellian Tourneuil will do whatever it takes, to the chagrin of the board and his well-mannered wife, Diane (Natacha Régnier), who comes from an old money background.

To achieve his aims, Tourneuil cooperates with immoral financier Dittmar Rigule (a brilliantly sinister Gabriel Byrne of “The Usual Suspects”), head of an American hedge fund who encourages this brand of “cowboy capitalism.” But Tourneuil must tread carefully to eventually outmaneuver Rigule, who intends a hostile takeover of Phenix.

After “Pirate Radio,” an erratic comedy about a 1960s pirate radio station in the North Sea, British writer-director Richard Curtis (“Love Actually,” “Notting Hill,” “Four Weddings and a Funeral”) returns to familiar territory with “About Time,” a contemporary English romantic comedy. Curtis has an established track record of satisfying audiences in this genre, and “About Time” surely gives his faithful audience what they want.

The result is reliable and pleasant, but a bit bland, though that is not unexpected. The gimmick of time travel does add flavor to the proceedings, asking some philosophical questions that are not always easy to answer.

Tim lives in a sprawling coastal estate in Cornwall with his retired academic Dad (Bill Nighy), his Mum (Lindsay Duncan), sister and Uncle D. On Tim’s 21st birthday, he’s told by his dad that males in their family inherit the capability of time travel. So Tim goes back in time for a second shot at a New Year’s Eve kiss to try to kindle a romance with Kit Kat’s best pal Charlotte (Margot Robbie), though it doesn’t go anywhere.

Tim departs for greener pastures, moving into the home of dour playwright Harry (Tom Hollander) in London, where he aspires to build a law career. Tim falls for American expat publishing assistant Mary (McAdams) at a restaurant, but he must go back in time to be in another place that night, erasing their encounter. Next, he must figure out a way to once again meet the love of his live.

A retrospective of Italian filmmaker, philosopher, poet and painter Pier Paolo Pasolini (1922-75), commemorating his 90th birthday in 2012, is presented by the National Gallery of Art and the American Film Institute (AFI) Silver Theatre, in association with the Italian Cultural Institute in Washington; the Ministry of Culture of Italy; Luce Cinecittà in Rome; Fondo Pier Paolo Pasolini and Cineteca di Bologna (which restored many of the prints).

The Pier Paolo Pasolini retrospective and Kids Euro Festival 2013 screenings are described in their respective sections.

The Pier Paolo Pasolini retrospective and Kids Euro Festival 2013 screenings are described in their respective sections.

In conjunction with the exhibit “Impulses from Saxony-Anhalt,” the program “Daring Ventures (Wage-Mutig): Selected Short Films” (Mon., Nov. 18, 6:30 p.m.) presents shorts from Saxony-Anhalt, including those by young filmmakers, many of which are U.S. premieres.