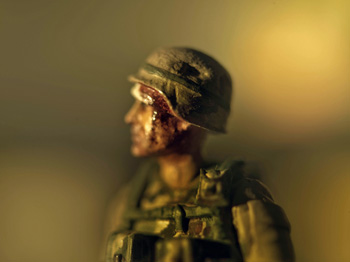 Union Army Gen. William Tecumseh Sherman famously declared that “war is hell,” but for almost as long as armed conflict has existed, there have been figurines, or toy soldiers, that depict war as noble and courageous — glamorous, even.

A compelling and unusual exhibition at the Corcoran Gallery of Art explores these disparate notions of war through the use of antique and modern-day toy soldiers and other props. “David Levinthal: War Games” is a vivid study of the acclaimed New York photographer’s surprising — and sometimes shocking — ability to explore the boundaries between simulated reality and historical truth.

Levinthal’s earliest work in this medium, titled “Hitler Moves East,” dates to 1972, as the Vietnam War was coming to an end. As a young student at the Yale School of Art, Levinthal met Garry Trudeau, who went on to fame as the creator of the popular comic strip “Doonesbury.” The two young art students collaborated on a book that documented the infamous and rarely photographed Nazi invasion of Russia, known in history books as Operation Barbarossa. Using a classic written document of the account that included no photographs (also called “Hitler Moves East”), the men painstakingly recreated the military movements of the epic conflict using traditional plastic toy soldiers, others small materials and cameras.

Using Kodalith, an old black-and-white graphic arts film famous for its extreme contrasts, Levinthal and Trudeau manage to recreate the bleak feel of Eastern Europe frozen in winter, as well as the physical motion of soldiers in battle. While the images don’t exactly appear life-like, the precise lighting and arrangements of soldiers and toy tanks — coupled with a distorted image resulting from the use of Kodalith film — creates a disturbingly realistic tableau. While the distortion serves to obscure and somehow humanize the obviously inanimate characters, one could argue some images are distorted to the point of becoming abstract art. What is it exactly we’re supposed to be seeing here? 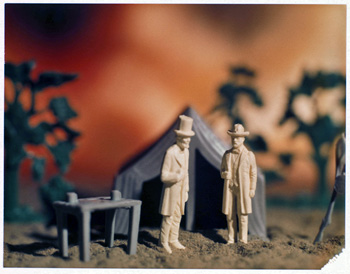 Perhaps the most iconic image in this series is a carefully rendered scene of warriors upended by an explosive in battle. Four soldiers cresting a grassy hill are suddenly thrown into the air as an image of thick white smoke envelops them. The primary subject of the photo — the third soldier from the left — appears blown backward by the blast, his rifle remaining at the ready and jutting from his side. A similar fate befalls a soldier on the far left, but he is flipped completely upside down. His splayed legs are the only section of his body visible to Levinthal’s camera.

The images of heroic soldiers made prone and vulnerable to injury is a marked contrast to Levinthal’s latest work, “I.E.D.,” also on display here. These images, rendered in vivid full color and on a more expansive scale, employ modern-day toy soldiers at war in the Middle East. In “I.E.D,” a reference to the improvised explosive devices that became common in Iraq and Afghanistan, the word “toy” almost seems quaint. These are highly detailed, multicolored action figures replete with rippling muscles, square jaws, perfectly tailored battle uniforms and the latest accoutrements of war. Levinthal shoots these figures in varying degrees of light and — unlike in “Hitler Moves East” — they depict hardly a trace of vulnerability.

One disturbing image shows two soldiers in sand-colored fatigues standing in front of a heavy corrugated steel garage door in the dark of night, illuminated by Levinthal’s surreal green depiction of a view through night-vision goggles. One of them aims his weapon at the barrier while the other lurches forward, pointing aggressively.

In another tense photo, two American soldiers are crouching in movement under a slightly blurred photo of former Iraqi dictator Saddam Hussein. The photo almost appears as if it were plucked from a war documentary. 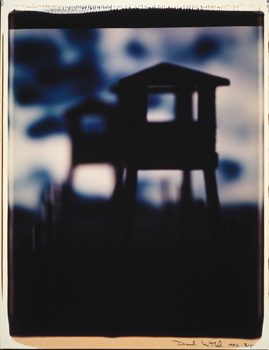 While most of the photos in “I.E.D.” depict U.S. soldiers in aggressive poses, one in particular demonstrates the cost of war. In this frame, a lone soldier stands stolidly but seemingly dazed as blood oozes from a bandage under his helmet. Garish bright lights in the background suggest ongoing explosions.

Levinthal’s “Wild West,” also displayed here, reproduces scenes from a different kind of war — that between “cowboys and Indians” in 19th-century America. These photographs, which include many horses and buffalo, are more densely populated, and the intricately designed figures come from both his own boyhood collection, as well as some he purchased for the project.

“Mein Kampf” is perhaps Levinthal’s most macabre work on display here. The series re-enacts Adolf Hitler’s theatrical rallies and descends into a graphic and terrifying depiction of the Holocaust’s insanity. One particularly troubling image is of men hoisting a body into an incinerator.

Using a rare 20×24 Polaroid camera, Levinthal’s expansive scenes of propaganda and horror in “Mein Kampf” are richly saturated in color and disturbingly compelling.

Levinthal once wrote that, “Ever since I began working with toys, I have been intrigued with the idea that these seemingly benign objects could take on such incredible power and personality simply by the way they were photographed.”

The show is a precursor to a larger summer exhibition called “WAR/PHOTOGRAPHY: Images of Armed Conflict and Its Aftermath,” a survey of conflict photography from the mid-1800s to the present. But Levinthal’s work holds its own. The Corcoran’s exhibition of his photographs is its first to be curated exclusively by undergraduate students at the adjoining Corcoran College of Art + Design. They did a job that would make a master of photography such as Levinthal proud.