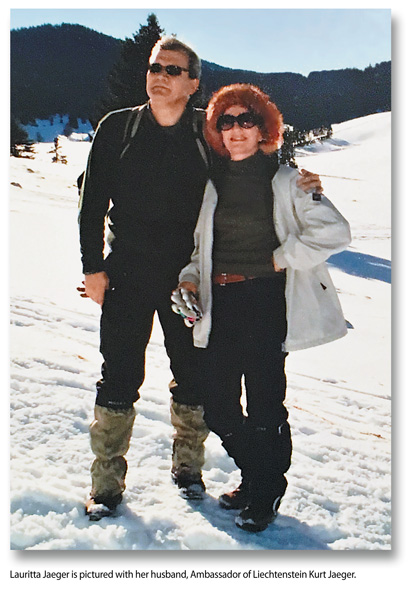 She was a nurse. He was her patient. It was October 1982 in the Swiss canton of Fribourg. He was studying economics at the University of St. Gallen and had just gotten into a car accident that resulted in one of the tendons in his hand being cut. It turned out to be a fortuitous injury.

Today, Kurt Jaeger is the ambassador of Liechtenstein and has been married to his former nurse, Lauritta Jaeger, for 26 years.

Lauritta said she initially liked her future husband not only as a patient, but also “as a person.”

“We married seven years later,” she told us. “I make him laugh and he makes me laugh.”

“As a nurse, I worked mostly in the hospital and clinic in general surgery, orthopedic and plastic reconstruction. I worked for nine years [as a nurse],” said Lauritta, who then worked for a surgeon specializing in maxillofacial surgery.

“At the age of 38, I stopped working when I had our son Fabian to dedicate myself completely to him and my family, which was moving around mostly in Switzerland every three or four years. My husband was in private industry then.”

Today, Fabian, 19, is in his first year at the University of Zurich studying music and physics. “He is the kid I dreamed of,” said the proud mother. “He is so cool, so easygoing. He never liked to fight. He is gentle.”

“At the beginning, I missed nursing a lot,” Lauritta admitted. “Taking care of someone can be very rewarding. Plus, there’s the teamwork. I was aware very early on that sometimes patients die and that life can be very difficult.”

But a life in diplomacy has been rewarding, she said, although she admits that she had no idea what she was getting into at the time.

“In 2005, we went to Brussels and lived there for 11 years where my husband assumed first the position of commissioner at the EFTA [European Free Trade Association]. EFTA was set up for the promotion of free trade and economic cooperation among its members, within Europe and globally.”

Kurt Jaeger has over 25 years of professional experience in international regulatory affairs, of which 15 years were acquired in the airline industry and civil aviation administration. From 2010 to 2016, he served as Liechtenstein’s ambassador to the European Union and Belgium before coming to Washington to take over for Claudia Fritsche, Liechtenstein’s longtime ambassador to the U.S. who established the principality’s embassy in D.C.

“I am so grateful that Claudia choose this place,” Lauritta said, referring to the embassy and residence located along the Georgetown Waterfront, inside the same sleek building as the House of Sweden. “I love the modern décor and the location. I can walk, feel the life…. God is so good to me. I’m so lucky.”

She added: “I love the international community here. Everyone is so friendly, welcoming and helpful. They smile at you and it’s not superficial. You don’t find this in other places. This is a vibrant, beautiful city. I love New York, too, but you don’t see the sun because the tall buildings are blocking it. Washington is greener.”

Yet constantly having to transition to a new city can be difficult, Lauretti conceded. “I hate moving itself. And it’s never easy to leave friends. Every ending has a new beginning. It’s a new chapter. It is important to always keep an open mind. It’s important to never wait until someone comes over to you. Take the first step to meet people.”

She said she relishes the chance to meet “new people from other countries and cultures. I like to learn about their history and traditions and try their cuisine. I eat a lot; I never say no,” she quipped, wearing a stylish crème-colored ensemble with a short, floating skirt designed by Maje, a French brand, that she bought in Majorca, Spain.

After being born in Bolzano, Italy, Lauritta was raised in the French part of Switzerland. She made homes for her family in Switzerland and Belgium. Wherever she is, she said she loves to return to the mountains. Even though this diplomatic couple have only been here for a year and a half, they have already visited Grand Teton National Park in Wyoming.

“When you have the mountains, you feel humble. There is majesty, a beauty. The power … it’s incredible.” 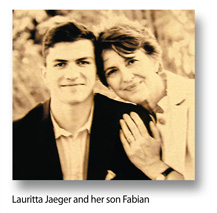 Liechtenstein, while tiny, is blessed with abundant natural beauty. The mountainous Alpine nation is a popular tourist destination for skiers and hikers.

Sandwiched between Austria and Switzerland, Liechtenstein is home to just 37,000 people but is one of the wealthiest nations in the world on a per-capita basis thanks to its lucrative industrial and financial services sector.

“Liechtenstein has a strong identity. We feel we are unique,” said Lauritta. “We are sixth-smallest country in the world. The others are the Vatican, Monaco, Nauru, Tuvalu and San Marino. We are very proud of what we are. We have 300 years of our existence, beginning in 1719. We have an active foreign policy and participate in the global dance. We have everything we need: fantastic museums, including a world-famous postage stamp museum, wineries, mountains, a chance to ski and walk in the snow, and even eat outside in the snowy winters sitting in front of an outside fire.”

Economically, she said, Liechtenstein is “quite proud” of the fact that manufacturing now accounts for 41 percent of its GDP and that these manufacturing companies are responsible for 4,000 jobs in the U.S.

At the same time, Liechtenstein has been criticized for being a tax haven for the rich. Lauritta said the government has worked hard to clean up its reputation and notes that manufacturing and general services rank above financial services in importance to the economy.

She also pointed out that the country’s corporate tax system is comparable to that of many industrialized countries. “It has no special offshore tax regimes and applies a flat 12.5 percent corporate tax rate to all businesses, which in some cases is higher than effective tax rates in other countries.”