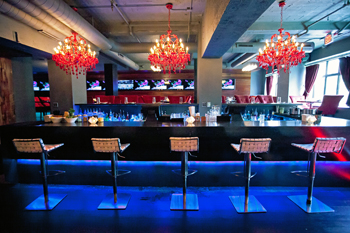 Fujimar, the new restaurant above Lima nightclub, offers up an Asian-Latin menu that focuses heavily on seafood in a striking modernist space that’s broken up into distinct dining areas.

Washington’s pulsating nightlife scene is usually more flash than substance when it comes to the food, but every once in a while, culinary quality shines through the glam.

In February, local hospitality entrepreneur and promoter Masoud Aboughaddareh reopened the restaurant at his popular K Street nightclub Lima. With a new concept and design, Fujimar intends to up the culinary stakes and broaden its young club-going customer base with a nouveau Asian-Latin theme.

In developing the menu, executive chef Raynold Mendizabal explores how Asian immigrants to Latin America may have adapted their cuisine to the new ingredients and culture they encountered. (Diners familiar with the former Lima’s menu will see some continuity between the new and old menus.) A Cuba native (and former math and physics teacher), Mendizabal brings a deep understanding and appreciation of his country’s cuisine that has not been as clearly expressed in his other ventures. Fujimar’s caramelized plantains, for instance, served up with spicy crème fraiche, take this humble dish to a new level, while the tostones, perfectly flattened and very crisp, are some of the best we’ve tasted in a long time.

Fujimar emphasizes seafood dishes and uses sustainably caught fresh seafood imported daily from Hawaii. With this focus on fish, Mendizabal can tap into the expertise he developed as the head chef at Pesce and Aguardiente, as well as co-creator of Ceviche Restaurant. Sushi and ceviche figure prominently on Fujimar’s menu as well. More than a dozen types of nigiri and sashimi are typically available, including ono, hamachi and the most unusual hapu’upu’u, a type of grouper with a delicate texture and mild flavor, found only in Hawaii.

Likewise, the range of ceviche illustrates just how diverse this dish can be, from a traditional white fish marinated in lime, onions, cilantro and hot green pepper; to barramundi with rocoto pepper; to a tiradito (similar to ceviche but with no onions and cut differently) of scallops with bitter orange chutney and olive oil. In particular, the ahi tuna tiradito with lemon-infused olive oil, shiro shoyu, and tiny green tobico (flying fish roe) is superb. The red deep-sea sweet crab from the southeastern coast of Tasmania, prepared with avocado, olive oil, lime and black pepper, is unusual and intriguing. 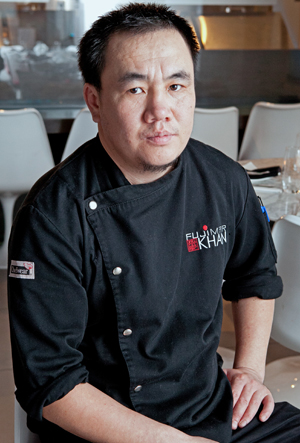 Head sushi chef Khan Enkhbaatar Gayabazar has created a variety of traditional and signature rolls for Fujimar that run the gamut from crunchy spicy tuna to salmon and crab.

Mendizabal has assembled a collection of main and side dishes to suit the broadest spectrum of appetites and fully express the range of his talents. Classic Asian dishes such as sweet and sour spicy shrimp and the Kung pao beef are only slightly modified to reflect a Latin influence. Other dishes are a more balanced fusion of the two cuisines, such as the salmon filet grilled in adobo spices and served with grilled yellow corn, edamame ragu and chipotle mojo, as well as the short ribs (so tender they almost melt in your mouth) braised in sweet ponzu sauce and spicy wasabi Yukon gold potato purée. Still others, such as the beef empanadas, are purely Latin in origin.

Seafood figures prominently on the main menu, including specialties such as Hawaii’s Chilean sea bass, the mero. Pan seared with a black soybean crust and a sweet-hot ponzu sauce, the rich white fish is effectively paired with a subtle purée of malanga. Maine lobster baked in wasabi-mango butter is an unusual but savory choice. The crispy Blue Point oysters served with watercress, tomato and yuzu-jalapeño dressing, as well as the mussels steamed in sake, cilantro and hot chilies are also nice combinations.

While the prices of the main dishes seem quite reasonable, the portions in some cases could be described as small plates, so order accordingly.

The fusion concept at Fujimar extends to the desserts, but here the basic dishes and techniques are continental with Latin or Asian flavors mixed in. For the coconut and chocolate “tea service,” a dense mousse of rum and fresh coconut is served in a chocolate cup along with a tiny pitcher of warm orange-infused chocolate and lemon-lime cookies. The unusual passion fruit tart is actually a thick cookie covered with passion fruit cream and served with a glass of passion fruit pulp and a cup of lavender-flavored crème brulée. The whole combination is exotic and somewhat unexpected, but delicious. If you have time, the chocolate soufflé, a rich dark chocolate infused with fresh ginger and served with a green tea crème anglaise, is well worth the 20-minute wait. For a more traditional Latin dessert, try the churros. Served with lime syrup and a thick chocolate dipping sauce, this version is many cuts above the standard fare.

Mixologists Ari and Micah Wilder, who helm Lima’s beverage program, have created several special cocktails that mirror the East meets Latin theme by blending tropical and Asian fruit juices. The Eastern Promise, for example, is a complex concoction of U’Luvka Vodka, yellow Chartreuse Yellow, yuzu, tamarind nectar, Sauterne foam, and a sprinkle of house-made violet salt. Deceptively benign, it packs quite a wallop. The Wilders have also assembled an unusual list of artisanal wines and sake that they classify by character as a guide to selecting an appropriate pairing for a meal. 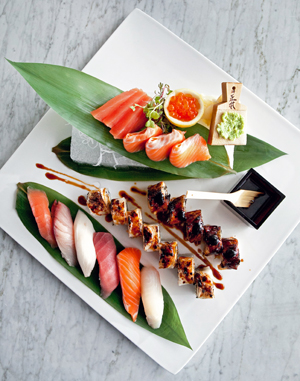 In creating Fujimar, Aboughaddareh brought in designer Ali Reza Honarkar to transform the second-floor space. The principle at Division 1, Honarkar is most noted for striking modernist residences in the area. With Fujimar’s capacity expanded to 160 seats, Honakar has created a collection of eclectic dining spaces. One room is dark with a heavy, almost brooding feel. Red upholstery, gray floors and dark wood paneling are illuminated by dim lighting from red crystal chandeliers. Pass along a wide, glowing corridor with hanging lucite cove chairs and blue chandeliers and you enter a room bright with white leather furniture and a long stainless steel bar and column encased in glass. The walls of both rooms are dominated by screens showing live feed from cameras above the sushi bar that capture the precision work of head sushi chef Gayabazar and his assistants as they caramelize scallops with a mini blowtorch for one of the house special rolls. The live feed is also interspersed with other images to suit the mood. On recent visits, diners were treated to a screensaver of charming tropical sea creatures enjoying their own dinner.

In converting Lima restaurant to Fujimar, Aboughaddareh and his team have created a more distinct identity for their cuisine and moved away from the all-in-one concept that exemplified his other establishment, the Park at Fourteenth. If this shift continues to reflect an increased focus on the food, and initial visits suggest it does, Fujimar may well attract a broader audience than did its predecessor. It’s certainly worth a try. However, if thumping club music and in-crowd seekers are not to your liking, plan your visit for early in the evening or early in the week to get the full food experience at Fujimar.