Home The Washington Diplomat June 2012 Refuge or Refusal: How Easy Is It to Get Asylum at U.S. Missions? 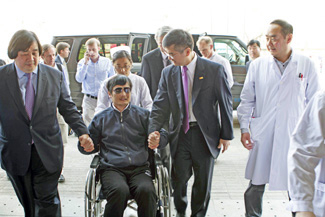 In late April, when blind Chinese dissident Chen Guangcheng escaped from home confinement and made it into the U.S. Embassy in Beijing, he all but sparked an international incident ahead of a high-level visit by Secretary of State Hillary Clinton to China.

His brief stay in the U.S. Embassy infuriated Chinese officials and put the Obama administration in an awkward position — how could it reconcile America’s support for human right advocates while delicately respecting a relationship of such strategic value? After days of high-level, top-secret negotiations, Chen left the U.S. Embassy for a hospital, but more confusion and diplomatic wrangling quickly followed when Chen changed his mind about wanting to stay in China. Eventually both sides found a resolution by allowing the activist and his immediate family to leave China for academic pursuits in New York but not to seek asylum.

The deal that was hatched has yet to be implemented and could still unravel. Analysts also continue to pore over the dramatic circumstances of the case and how it was handled by U.S. officials.

But Chen’s case again raised a question that has bedeviled foreign missions as long as they have existed in hostile, war-stricken or closed countries: How far can American embassies or consulates go in protecting dissidents from their own governments? What options did U.S. diplomats in Beijing even have with Chen?

There’s a rich international tradition of embassies being used for refuge, primarily in Latin America. In 1975, the United Nations published a report in which it broadly analyzed the practice of “diplomatic asylum,” or the use of foreign missions for refuge and protection. It found that diplomatic asylum dated back to the 19th century and was widely used — sometimes to an extent that angered host countries.

According to the State Department’s Foreign Affairs Manual, “Posts may not grant or in any way promise ‘asylum’ to any foreign national. Although foreign nationals may request ‘asylum,’ posts should be aware that the term has specific meaning in U.S. immigration law. Persons may apply for asylum under U.S. law only if they are physically present in the United States or at a land border or port of entry…. The United States does not recognize the granting of asylum at posts abroad.”

Chen said he wasn’t interested in political asylum, though, and U.S. embassies and consulates have in the past served as a refuge of last resort for dissidents — albeit in very rare circumstances. Under such a scenario, he may have qualified.

Moreover, Chen’s case was unique. He was a world-renowned dissident and self-taught lawyer whose plight was well known to U.S. government officials for years. He was also initially accepted into the embassy under humanitarian grounds, suffering from a broken leg and other injuries sustained during his bold nighttime escape from house arrest.

And even though Chen was no longer inside the U.S. Embassy but in a Beijing hospital when he reversed course and asked to leave China, by that time his escape had already drawn worldwide attention, putting the Obama administration in the spotlight — and in a bind.

But according to a former Foreign Service officer who served in China and spoke to The Washington Diplomat on the condition of anonymity, offers of refuge or protection don’t come often. Nicole Thompson, a spokeswoman with the State Department, confirmed that it is not “normal protocol or procedure” to offer refuge or protection within U.S. embassies or consulates.

In a secret 2009 cable published by WikiLeaks last year, the State Department outlined procedures for dealing with walk-ins, including those seeking refuge. “Temporary refuge may be granted only if there is compelling evidence that the walk-in is in imminent physical danger for any reason, or in imminent danger of persecution for reasons of race, religion, nationality, membership in a particular social group, or political opinion,” it stated.

Even then, though, the cable recognized that refuge should only be considered in the “rare situations in which an individual faces not just imminent physical danger, but immediate and exceptionally grave physical danger.”

One of the most famous cases in U.S. diplomatic history is that of Cardinal József Mindszenty, a Hungarian religious leader and dissident persecuted by the country’s communist government in the late 1940s. After the Soviet Union invaded Hungary to shore up the struggling regime in 1956, Mindszenty asked the U.S. ambassador in Budapest for protection and shelter. It was granted, and for the next 15 years Mindszenty was confined to the U.S. Embassy compound. He was allowed to leave in 1971 under a deal brokered by the Vatican. 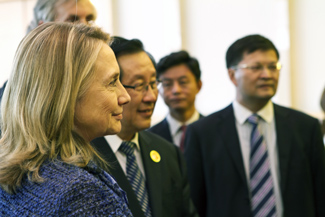 Secretary of State Hillary Clinton participates in last month’s U.S.-China Strategic and Economic Dialogue, which was dominated by the case of blind Chinese dissident Chen Guangcheng. The New York Times reported that Clinton made no requests during the talks, but was clear she would have to speak about the case before the press. Within hours, the Chinese released a statement that Chen could travel to study abroad.

In June 1978, seven Russian Pentecostalists stormed the U.S. Embassy in Moscow, where they demanded protection from religious persecution. For five years the group — which came to be known as the “Siberian Seven” — lived in a cramped basement room until they were finally allowed to immigrate to Israel.

In 1989, Fang Lizhi, a Chinese astrophysicist and pro-democracy activist, and his wife Li Shuxian entered the U.S. Embassy in Beijing just as Chinese authorities began the crackdown at Tiananmen Square. He was granted refuge — by President George Bush, no less — and after a year living in a windowless embassy room, the couple was allowed to leave China as part of negotiations between U.S. and Chinese authorities. Fang died this past April 6 at his home in Tucson, Arizona.

Still, as Chen’s case demonstrated, decisions of these sorts, especially when they involve complex relationships, often rise to the highest levels of the State Department and are balanced against broader strategic interests. According to the New York Times, negotiations over Chen’s permanence at the embassy involved the State Department’s senior-most legal advisor.

Moreover, U.S. posts have to consider the practical realities of offering sanctuary to dissidents. “Granting a walk-in temporary refuge in an embassy or other USG facility may actually increase the danger to an individual, particularly in hostile countries and if the individual is a host-country national. The longer the person remains, the more likely the host government will become aware of the request for temporary refuge and possibly take retaliatory action,” said the 2009 cable.

A final consideration — but one that is extremely important, say diplomats — is the perception that U.S. embassies and consulates are havens for all matter of dissidents, political activists and regular people seeking to escape their own countries.

During a congressional hearing in 1981 on a bill that would have granted the “Siberian Seven” visas to travel to the United States and counted their time in the embassy as time served toward gaining U.S. citizenship, the State Department worried about the future implications of such a move.

“[T]he effect from the Soviet point of view would indeed be to set a precedent,” said Thomas W. Simons, director of the Office of Soviet Union Affairs, during his testimony on the bill. “They cannot avoid the specter, I think, of very many people being heartened by a precedent, and sitting in foreign embassies until they are allowed directly out of the country.”

On that note, the State Department’s 2009 cable again provides guidance: “Temporary refuge may never be granted to foreign nationals who simply wish to immigrate to the United States or evade local criminal law.”