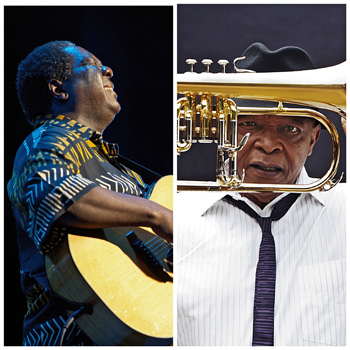 With so many performing arts venues in the Washington area and a citywide arts calendar packed to the brim, it can be all too easy to find a few reliable favorites and overlook the rest.

Instead, break out of the rut by discovering new artists, new collaborations or a new way of experiencing music at some of the area’s best venues for showcasing emerging and established international performers. Here are three such local treasures — in D.C., Maryland and Virginia — that should be on any cultural aficionado’s radar.

Scheduling an eclectic mix of programming for one of the largest performance venues in Washington, D.C., is an ongoing challenge for the staff at Lisner Auditorium at the George Washington University, who are always working to bring renowned international acts to their stage, as well as highlight emerging artists. To ensure that ticket sales remain high at Lisner, which was built in 1943, Executive Director Maryann Lombardi has taken a novel approach.

South African musicians Hugh Masekela and Vusi Mahlasela will perform together at Lisner Auditorium for the Feb. 22 performance “20 Years of Freedom.”

“There are certain names that people will just recognize, because they are at that iconic stature for their genre, their country, their culture. They are the no-brainers, and big coups for us to have here,” Lombardi told us. “This fall, we also started pairing artists together who have never worked together before. This way, we’re able to appeal to both artists’ fan bases, as well as introduce them to acts they might not otherwise know.”

For instance, on Jan. 30, Zap Mama and Antibalas collaborated for the first time to celebrate the evolution of contemporary Afro music. Drawing on her Congolese-Belgian heritage, Zap Mama mixes African vocal techniques with European polyphony, while Antibalas blends Afrobeat with New York City Latin funk and the traditional drumming of Cuba and West Africa.

These pairings tap into a broader trend in music and the arts, Lombardi said, in that the traditional boundaries no longer apply. How people consume their music is changing, and the standard genres of world music, pop, country and the like are not as clear as they once were. That leads to tremendous opportunity.

“We have a strong history in the global market and in D.C., and we’re proud of that, but we also want to be agile in a changing world, and a changing method for how people are consuming their music,” Lombardi explained. “We have a young staff that’s really in tune with that, and it’s really thrilling to create an environment where the diversity of the world that we live in is all on one stage.”

Upcoming performances include “20 Years of Freedom: Hugh Masekela and Vusi Mahlasela” (Feb. 22), blending the two South Africans’ deeply personal jazz and folk styles for an evening of reflective and celebratory music; and “Elite 8 Bhangra Invitational 2015” (Feb. 28), a dance competition between the best Punjabi bhangra teams on the East Coast.

Many people know the picturesque 7,000-seat Filene Center amphitheater at Wolf Trap in Vienna, Va., which hosts over 90 concert performances each year, along with a variety of outdoor and indoor events that showcase the 100 acres of sprawling Virginia farmland on which Wolf Trap was built. 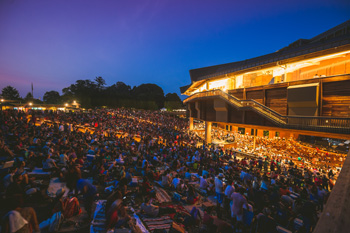 But fewer people know that the only national park dedicated to the performing arts also houses an intimate, 382-seat indoor theater, the Barnes. The two adjacent 18th-century barns were a gift from Wolf Trap’s founder, Catherine Filene Shouse, who was impressed by the acoustical quality of the wooden barn after attending a concert in Maine and wanted to bring the same informal setting to Wolf Trap. Here, ticketholders can see emerging artists, as well as international names in acoustic, coffeehouse-style performances.

“We have a lot more freedom on the smaller venue to reach out and bring something that is artistically viable, but maybe lesser well known,” said Peter Zimmerman, senior director of programming and production at Wolf Trap. “We have an audience here that trusts us and says, ‘If Wolf Trap is putting it on their stage, it must be worth it.'”

Zimmerman says both venues will be filled with exciting new acts, as well as the returns of old favorites. Upcoming Wolf Trap performances include “International Guitar Night” on Feb. 4 and 5; HAPA, which infuses traditional Polynesian sound with pop and world-beat twists (Feb. 20 and 21); R&B soul singer Bettye LaVette (Feb. 24); “Prairie Home Companion” back for its 15th year at the Filene Center (May 22 and 23); the 10th anniversary of “Celtic Woman” (June 20); and Hubbard Street Dance Chicago (June 24).

“In some ways, we’ve always catered to the diplomatic and international audience,” Strathmore Artistic Director Shelley Brown said of the music center and arts complex located in North Bethesda, Md.

Strathmore, which opened its doors in 1983, presents a diverse program of art exhibitions, concerts, performing arts programs and literary lectures and other events at its scenic 16-acre site. 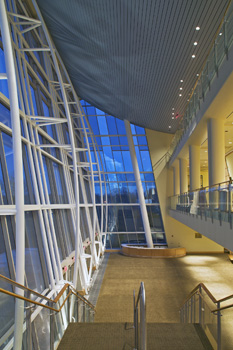 Brown said that the venue relies on its relationships with local embassies to help it find great artists. “If there is a performer with a strong tie to a geographic region, I always reach out to the embassy at the very beginning of the evaluation process.”

She said the practice has yielded some great performances at Strathmore, including 10 cellists from the Berlin Philharmonic on the recent 25th anniversary of the fall of the Berlin Wall. Other upcoming international include French-Dominican jazz vocalist Cyrille Aimee on Feb. 8; “Tango Buenos Aires: Song of Eva Perón” on Feb. 25; and “The Merchant of Venice” staring Sir Derek Jacobi on Feb. 27.

“To stay abreast of who the important international performers are, you just have to stay open to new performers coming onto the scene every year; it’s just such a vast universe,” Brown told us. “But we also don’t want to waste money trying to speak to a potential performer who’s not interested.”

Brown points to the large international community in the Washington area and says that the Music Center at Strathmore offers an opportunity for people far from home to connect with their culture, and each other. She said she is always striving to understand the many cultures in the region, and how each seeks entertainment, and then deliver programming tailored toward each.

“It’s important to understand that you are not part of that community, to head into it knowing what you don’t know, and to learn what the sensitivities are of that community,” Brown said. “I’m always looking for people who can educate me.”