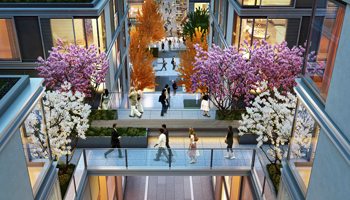 Not that long ago, the U Street neighborhood was a whorl of dilapidated shops, the odd famous fast-food place, and lots of low-rise, low-rent apartment blocks.

Today, towering glass edifices rise from city blocks that used to be occupied by strip malls — towering, at least by the standards of D.C., where buildings are subject to height restrictions (see “Tall Ambitions: Officials Eye Curtailing D.C.’s Height Restrictions” in the September 2012 issue). Doormen sit behind desks inside buildings where residents work out on treadmills, sip complimentary coffee, or play video games on the X-Box in the communal lounge.

In U Street, the H Street Corridor, Penn Quarter, Columbia Heights and so many other D.C. neighborhoods, luxury is now spelled luuuxery as developers build pricey apartments and condos targeting, in many cases, young professionals like lawyers and lobbyists — anyone who earns a sizeable income and doesn’t have a large, school-age family. Many of these new units, while upscale, are relatively small — two bedrooms, tops — and the city’s public schools still have a long way to go to catch up to the quality education offered in neighboring Maryland and Virginia suburbs.

The Residences at CityCenter consists of 216 condominiums that will be move-in ready later this fall and were designed by Foster + Partners — the London-based architecture firm behind the Swiss Re building in London and Beijing Airport.

The revival of luxury living in the city has bucked real estate trends nationwide. As prices floundered around the country, Washington was cushioned from the worst by dint of the fact that it is home to the federal government — backed by an army of private contractors — and scores of embassies and businesses that need to house their workers.

Today, the city boasts some of the most well-educated, wealthiest people in the country, not to mention some of its lowest unemployment rates. According to recent figures released by the U.S. Census Bureau, one in seven households in the Washington region ranks among the nation’s top 5 percent income bracket. Seven of the nation’s 10 most affluent counties are also located in the Washington region, including the three richest. Meanwhile, the population has steadily grown, faster than most other U.S. cities.

And all those hard-working, well-paid newcomers need roofs over their heads — preferably nice ones. As such, the real estate market here never took the hit it did in other parts of the nation. In fact, home prices in parts of D.C. and Northern Virginia have even surpassed those of the pre-crash heyday.

But some sectors have struggled more than others. If you were in D.C. when the bottom fell out of the U.S. economy in late 2007, you’ll remember that condominium prices were the heaviest rock to fall in the property market. Data posted by Zillow show that the median condominium sale price fell by $50,000 on average between May 2007 and February 2008, from $392,000 to $343,000. Part of that was due to the glut of condos on the market in the capital at the time. Another part was easy mortgages and people getting in over their heads. As a result, many new development projects that came online during the worst of the downturn converted a portion of their condos into apartments, because prices for rentals in D.C. have remained strong.

The condo market seems to have turned the corner in 2010, when the volume of sales of new condominiums shot up by 62 percent compared with the previous year, according to Virginia-based Delta Associates, considered by many to be the oracle of Washington-area real estate data.

It was in 2010 that international real estate firm Hines secured funding to change a tarmac parking lot near D.C.’s Chinatown, from which budget travelers used to catch buses to New York, into a 10-acre urban model of revitalization.

CityCenterDC, just blocks from the Washington Convention Center, is one of the most significant development projects in D.C. history. The funding impetus for CityCenter came from Qatari Diar Real Estate, whose $700 million stake represents one-third of the project’s total value and ranks as one of the biggest investments Qatar has ever made in the United States.

Called The Residences at CityCenter, the condo units are under construction and will be move-in ready in the fall of this year. But potential buyers who want to invest in a CityCenter condo designed by Foster + Partners — the London-based architecture firm that gave us the Millau Viaduct in France, the cigar-like Swiss Re building in London, and Beijing Airport — can visit a model residence across the street from where CityCenterDC, which is being jointly developed by Hines and Archstone, is taking shape.

A walk around the model condominium — a 1,200-square-foot two-bedroom unit — illustrates how the architects have made maximum use of the space to allow privacy in the two bedrooms, and close contact with visitors when that’s what residents are looking for. Every residence has a terrace, balcony or enclosed Juliet balcony, and large floor-to-ceiling windows allow natural light to penetrate deep into the space. 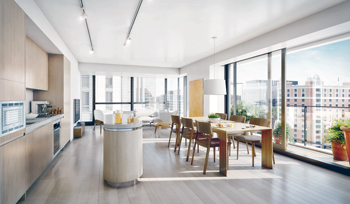 CityCenterDC, a 10-acre urban oasis of revitalization located just blocks from the Washington Convention Center, is one of the most significant development projects in D.C. history.

In the kitchens, dishwashers and fridges are cleverly recessed into the cabinets (by Italian furniture designer Molteni). Residents might have to hunt around a bit when they first move in, at least to find the dishwasher. The fridge is more obvious.

The bathroom in the model unit features side-lighting, which is reportedly the best way to put on makeup, recessed Molteni medicine cabinets, and a large walk-in shower.

More than half the condos at CityCenterDC will be two-bedroom residences, with an average ticket price of between $900,000 and $1 million, Hines Director John Mullin said. The remainder will be one-bedroom units. Residents will be able to park underneath the development and do their shopping in the pedestrian-only streets and walkways.

They will also be able to spend time in the sumptuous and meticulously planned common areas, which were also designed to draw in buyers. Residents will have access to a rooftop sundeck with a water feature, fire pit and outdoor grills, which Mullin and the development team aptly refer to as “outdoor kitchens.”

For inspiration for the rooftop common spaces, “We looked at a lot of different buildings in the city — you go up there and it’s pretty stark — and we wanted something that felt like it’s programmed and has a purpose. And also it’s nice when you’re in the city to go up and have a lot of greenery,” Mullin said.

Indoors, residents will have access to a temperature-controlled wine storage space, media lounge and a gym, which overlooks an outdoor landscaped terrace to make those miles on the treadmill feel like the real thing. And, in fact, should a resident want to feel the wind in their hair when they’re running, the National Mall is a warm-up jog away from the condominiums.

While the condo market is rebounding, apartments in the District remain in high demand — not surprising given how transient the city can be (just look at the fact that CityCenterDC is offering around 200 condos for sale, but more than 450 apartments for rent). So for those who don’t necessarily want to buy a property, luxury-seekers can also rent in buildings like Capitol View on 14th, one of a handful of platinum LEED-certified residential buildings in the United States (LEED refers to the Leadership in Energy and Environmental Design rating system by the U.S. Green Building Council).

The development’s eye for style is evident as soon as you walk into the lobby, where a dazzling display of color from the Dale Chihuly-designed glass sculpture hanging from the ceiling catches the gaze of potential tenants. 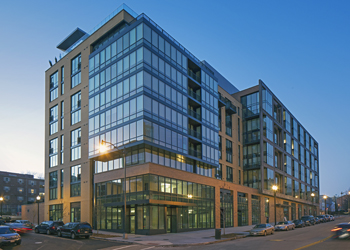 Capitol View on 14th features a glass sculpture by American artist Dale Chihuly hanging in the lobby, an outdoor water garden, rooftop pool, a game room and other luxury amenities.

Up one floor is a game room — X-Box games are available from the front desk — a wired business lounge, television viewing room, sprawling fitness center, and an outdoor water garden.

Possibly the pièce de résistance is the rooftop pool (still a rarity in the city), where tenants can swim leisurely laps, stopping from time to time to take in the vista: Capitol View on 14th was thus named because it affords a clear view of the Capitol from its upper floors. And it’s on 14th Street.

Apartments in the nine-story building are becoming available floor by floor and range from studios to two-bedroom units. The Washington Diplomat visited a two-bedroom apartment on the seventh floor, with stunning views over Washington through the floor-to-ceiling windows. The living room features bamboo floors, while the bedrooms were carpeted.

Rent for the 1,600-square-foot two-bedroom unit was around $5,900 a month, according to leasing sales director Gamze Blakey. Smaller two-bedroom units (around 1,000 square feet) are around $3,600, and there are also studios and one-bedroom apartments available, including walk-out, street-level, loft-style apartments — ideal for pet owners, said Jim Talbert, sales manager for Capitol View. The building is quite pet-friendly — there were dog biscuits in a jar in the reception area.

Neither Capitol View at 14th nor CityCenterDC were authorized to say how many units had been sold or rented. But if Turnberry Tower in nearby Rosslyn, Va., just across the bridge from Georgetown, is any indicator, people are willing to pay top dollar even in a tough economy.

The swanky 26-story high-rise is home to 247 luxury condo units, all of which have been recently sold — despite debuting smack dab at the height of the economic downturn over four years ago. Turnberry boasts many of the amenities that have come to be standard in the luxury market — indoor pool and Jacuzzi, theater room, social area, fitness center, 24-hour free valet parking — but it is also boasts many distinct qualities that set it apart. 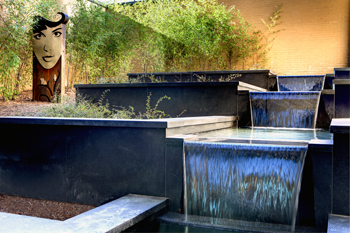 For one thing, it doesn’t have to abide by the District’s strict height restrictions, and because it’s a stone’s throw away from D.C., it offers expansive views of the city and its many monuments. Size-wise, the condos are larger than many comparable units in the city, with the smallest floor plan at 1,322 square feet (a one-bedroom), all the way up to the 5,304-square-foot Deluxe Tower Suite that includes three bedrooms, five and a half baths, a family room, dining room, staff quarters and a 742-square-foot balcony. In addition, 80 percent of the units have direct elevator access.

Residences at Turnberry Tower started from the $700,000s, and with posh amenities that rival those in cities such as New York and Los Angeles, Washington is still a (relative) bargain for seekers of luxury living. Some studio apartments in New York, where it would be difficult to swing a cat — a British expression indicating a very tight space — come with rents higher than the newest two-bedroom luxury rentals in D.C. Renters also have the upper hand this year, as vacancies in the city’s top-class apartments are reportedly up.

For condominiums, on the other hand, now could be the time to buy. Inventory has shrunk steadily in D.C. since 2008, according to real estate statistics firm RBI, and by 2012, the metropolitan area — which includes the D.C. suburbs — was “experiencing historically low inventory, with active listings at their lowest December-level in nearly a decade, and new listings at their lowest level for any month.”

All of that makes residences like Capitol View and CityCenterDC hot commodities — at least for those who can afford living in the cool lap of luxury in the heart of the nation’s capital.