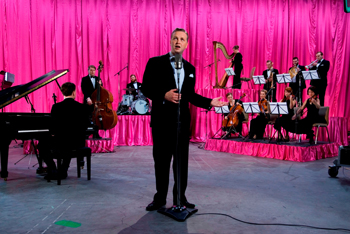 “If you have to be happy all the time, that is so depressing. That is really dark stuff,” he told The Diplomat. “Being aware of sorrow makes life much easier to bear, to bear the melancholy with joy.”

The prolific artist, known for work that encompasses music, theater, video installation, painting, photography, repetition and a melancholy sense of humor, has staged exhibitions across the world and represented Iceland at the Venice Biennale in 2009. The first U.S. survey  of his work is on view now at the Hirshhorn Museum until Jan 8. The exhibition includes live performances by local female guitarists who take turns standing on a rotating golden pedestal while endlessly strumming a solitary E chord for hours. Kjartansson said the feminist art movement has greatly influenced his own work, and “Woman in E” subverts the traditional objectification of women.

“It’s that repetition and endurance part that makes her be like a monumental sculpture,” Kjartansson said at the Hirshhorn while the single chord reverberated in the background. “It’s super limiting as a musician, but it’s weirdly like the essence of meditation. You forget yourself to be soaked in one chord.”

As a viewer, the work has a slightly uncomfortable voyeuristic quality, watching a woman in a sparkling gold dress reminiscent of beauty pageant contestants while she stares passively past your gaze, with no reaction other than a subtle swing of the arm to strike the next chord. The woman becomes a prop stripped of her personality, a golden-hued wedding cake topper minus the groom. Some might view it as dismissive or sexist, but Kjartansson doesn’t care if people understand or even misinterpret his work. Despite the temptation, he doesn’t stroll through his own exhibitions to overhear visitors’ comments.

“I think it’s a little rude. I want people to be able to bitch about me,” he said. “The work is there and you can take it like you want to.”

In the first room of the exhibition, Kjartansson plays an unconvincing Grim Reaper in “Death and the Children.” In a cemetery, a group of schoolchildren laugh at him and his unconvincing fake scythe made from a wood stick and paper. “You are just an elf with a stick!” one child shouts, while another says Kjartansson is small and ugly. After being followed by the children, Kjartansson disappears into a crypt. The humorous work explores conflicting desires, the innocence of youth, the universal fear of death and the uncertainty of what lies beyond.

Kjartansson, who previously was a member of rock bands in Reykjavik, often blends music into his performances, even though he doesn’t think he is a good musician. “I was really just a poseur. I wasn’t good. It didn’t come natural to me in a way as visual art,” he said of his rock band days. “When it’s visual art, it feels much more effortless. It’s this total freedom. There’s no other profession in the world that is as much about individual freedom.”

In another video performance titled “God,” Kjartansson assumes the role of a classic 1950s Las Vegas crooner leading an 11-person band performing in front of gaudy pink curtains. Wearing a black tuxedo with slicked-back hair, Kjartansson sings three words over and over again: “Sorrow conquers happiness.” After listening for some time, the words start to lose their meaning, becoming a mantra that blurs together with the lush music. The piece conjures feelings of melancholy but also of stillness, casting an anchor into the psyche that holds fast despite the repetitive nature of the performance.

Kjartansson varied his use of repetition in “The End – Venezia,” his piece for the 2009 Biennale. He spent six months creating a series of 144 paintings — one for each day — of a Speedo-clad artist lackadaisically drinking and smoking against the resplendent backdrop of an Italian palace. Done at the height of a global economic crisis, the endless parade of paintings seems to mock the search for artistic inspiration in the face of real-world hardship.

In “Me and My Mother,” Kjartansson, who hails from a family of Icelandic actors, enlists his own mother to repeatedly spit in his face in a series of videos filmed over five years. The result blurs reality and fiction in a cringe-worthy yet absurdly humorous commentary on family and the passage of time.

But the most powerful and captivating work by far is “The Visitors,” a series of nine life-size projections of musicians, including Kjartansson playing guitar in a bathtub, who perform together but apart in different rooms of the Rokeby Farm in upstate New York. The musicians, who wear headphones so they can hear each other, play a haunting melody with just one refrain: “Once again, I fall into my feminine ways.”

The performance surrounds you with the sound of the musicians’ voices and instruments emerging from their own projections, with the sounds shifting as you move around the room. The setting is a stately home that has seen better days with ornate but heavily worn furniture, peeling paint and a pervasive sense of decay. At the end of the hour-long performance, the musicians walk across a field toward distant mountains shrouded in fog. Like much of Kjartansson’s work, the performance blends music with art, melancholy with joy and a sense of history with the immediacy of the present.