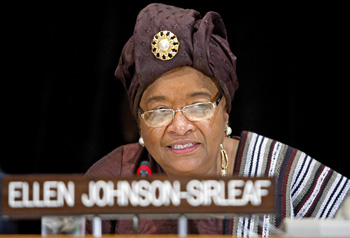 When Liberians vote on Oct. 11 in the first round of their country’s presidential election, among the 16 names on the ballot will be a woman considered one of the most highly respected heads of state in Africa.

In her first six years as president, Ellen Johnson Sirleaf, Liberia’s famed “iron lady,” has indeed used her steely determination to revive the image of this small, war-torn West African nation. Since 1980, when a coup led by Samuel Doe overthrew the long-established government, Liberia had been one of the continent’s perennial basket cases. For a quarter century, the country was ravaged by intermittent civil wars, which left more than 200,000 dead, a million displaced, and its infrastructure in tatters.

The faces of power throughout this period were anything but dignified statesmen. Charles Taylor, president from 1997 to 2003, awaits verdict in The Hague on charges of terrorism, murder, rape, sexual slavery, and the use of child soldiers in neighboring Sierra Leone. Prince Johnson, a breakaway rebel from Taylor’s National Patriotic Front, encapsulates the horror of the day in a 1990 video that still sells bootlegged copies in Monrovia, Liberia’s seaside capital. In the film, Johnson is seen sipping a Budweiser as a subordinate slices off the ear of the recently deposed and executed Doe. This was African brutality in its most raw, uncensored form. (Today, the fact that Johnson is a sitting senator who’s also running for president also speaks to the enduring hold of that brutality.)

It was into this backdrop that the Harvard-educated Sirleaf was thrust, following her 2005 victory in Liberia’s first post-Taylor election. As Africa’s first female president, the task ahead, in her own words, was “awesome” — rebuilding her government, and her country, from the ground up.

Six years later, she can point to some real accomplishments. Monrovia, a city virtually annihilated when she took office, now has paved roads and a rapidly expanding electrical grid. Though ethnic and factional tensions remain, security has improved markedly — thanks to the continued presence of UNMIL, the 9,000-strong United Nations peacekeeping mission. Bent on development — her current pitch to voters — Sirleaf has ushered in a period of slow but steady economic growth, attracting foreign investors like Chevron and steel giant ArcelorMittal and securing $4.6 billion in debt relief from the World Bank, her former employer. At the same time, she’s presided over a gradual awakening of individual liberties. According to an August 19 report by the International Crisis Group, Liberia under Sirleaf has seen “greater transparency, improved human rights, less political persecution, and unprecedented freedom of speech.”

These accomplishments have won praise from a host of global leaders, and launched Sirleaf on the international stage like few other heads of state in Africa. Still, the 73-year-old icon is not without her critics. Among her key shortcomings, say analysts, has been her inability to tackle corruption.

Though several anti-corruption initiatives have been undertaken under her watch, none have resulted in tangible action, and Sirleaf herself admits she’s been loath to go after crooked lawmakers when she needs them to back her pro-growth reforms. Less excusable has been her failure to put a dent in the long-held practice of nepotism. As president, Sirleaf has appointed sons and a stepson to plush jobs at the Central Bank, National Oil Company and National Security Agency. One son, Robert, has been accused by some media of improperly using state money to fund stadiums and other infrastructure projects in a bid to gain political support for his mother. He and the president have both denied such allegations.

Whatever the case, Liberia remains a country with a deeply embedded culture of impunity. Though its Truth and Reconciliation Commission (TRC), born out of Liberia’s 2003 Comprehensive Peace Agreement, recommended the establishment of a criminal court to try those responsible for human rights violations during the civil war period, no judicial mechanism was ever created, and to date not one individual has been prosecuted. More controversially, the TRC recommended that Sirleaf, along with 48 others, be barred for 30 years from holding public office, due to her fundraising in the 1980s for then warlord-turned-president Taylor. Though Sirleaf has admitted she initially supported Taylor, she says she backed away when she realized the degree of his human rights abuses. To an extent, she’s been exonerated by Liberia’s Supreme Court, which has declared the 30-year debarment from public office unconstitutional. Still, this hasn’t stopped criticism from her political opponents.

“When the war was raging, she … was legitimizing those atrocities — people who were killing, disemboweling pregnant women, cutting off limbs,” Winston Tubman, a former member of the Doe administration and one of her key election challengers, told Foreign Policy in July. “Instead of saying ‘stop that, this is your own country,’ she supported that.”

While such hyperbole may make for good media, it’s unlikely that Sirleaf’s links to Taylor will feature prominently in the election. According to Titi Ajayi, West Africa fellow at the International Crisis Group, most of the candidates running have been in Liberian politics for 20 years, if not longer, and few can say they have no associations with Taylor. Yet this doesn’t mean Sirleaf won’t be vulnerable in other areas. In particular, Ajayi cites alienation among rural voters who, yet to see the infrastructure that’s come to the capital city, are feeling ignored as their country progresses. 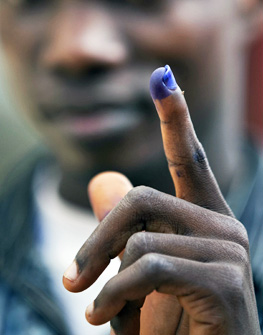 A Liberian in Monrovia holds up his ink-stained finger as proof of having voted in the war-torn country’s first constitutional referendum in 25 years.

“For a very long time there’s been this feeling that everything happens in Monrovia,” Ajayi told The Diplomat. “If you travel outside of the capital there’s some level of resentment and frustration that they’re being left out of the development process.”

Sirleaf herself has said she’s only about “eight years into a two-decade process of recovery and development” — and that process has yet to reach the bulk of the country’s impoverished citizens. Roads and basic infrastructure remain sorely lacking, unemployment levels hover around 50 percent, and Liberia is ranked a dismal 162 out of 169 on the U.N. Human Development Index. In short, life for many Liberians remains miserable.

And that’s a sentiment likely to be exploited by Congress for Democratic Change (CDC) candidate Tubman and the Liberty Party’s Charles Brumskine, the only two challengers with a legitimate chance of unseating the president. In a campaign that’s more about personality than policy, both have been jockeying for bases of support across the country, attempting to balance their tickets by appealing to Liberia’s 16 distinct ethnic groups.

It is here that Liberia’s unique history enters the picture. Established in 1847 by returned American slaves, Africa’s oldest republic was long ruled by an elite class of so-called Americo-Liberians, who today account for just 5 percent of the population. Though Doe’s 1980 coup ushered in an era of rule by “natives,” Americo-Liberians remain a privileged social class. While neither of Sirleaf’s parents were Americo-Liberian by birth, both were raised in Americo-Liberian homes, and Sirleaf grew up among Monrovia’s Americo-Liberian elite. As president, she’s come under fire for including a disproportionate number of Americo-Liberians in her administration, something that Tubman and Brumskine may well use to their advantage. Though both are Americo-Liberian themselves, they have courted wide support among indigenous groups.

Tubman, in particular, has a significant ace up his sleeve. George Weah, his CDC running mate and former international soccer star, actually won the first round of voting in 2005 before losing to Sirleaf in the run-off, and still commands respect across the country (admittedly more for his athletic fame than his governance ability).

“Weah is the one who actually has the power,” says Lansana Gberie, research analyst for West Africa at the Security Council Report in New York. “He used the money he got from his soccer years to do a lot of philanthropy work with Liberian youth. And he comes from a very poor rural background. Over 90 percent of Liberians are coming from that same background.”

Though both Brumskine and Tubman stand a solid chance, Sirleaf’s advantage of incumbency and her ability to hand out patronage means she may very well win again, says Gberie.

Either way, the significance of the October poll — and the subsequent November 8 run-off held if no candidate receives more than 50 percent of the vote in the first round — lies as much in the nature of its conduct as in the identity of its victor. Though security has improved steadily since 2006, Liberia remains flush with unemployed youths and ex-combatants, as well as hundreds of local fighters who have returned from neighboring Côte d’Ivoire, where they were allegedly employed as mercenaries by both sides in that country’s recent violent post-election crisis.

While a similar tragedy in Liberia is not expected, the Crisis Group notes, “violent protests cannot be ruled out, even if the elections are credible.”

Unlike the election in Côte d’Ivoire, where massive rigging was reported across the country, experts say the Liberian poll is likely to be well run. The country’s 2005 election was given a clean bill of health by international monitors, and Liberia’s National Elections Commission, generally well respected, recently staged a successful constitutional referendum, the country’s first in 25 years.

Whoever is declared the winner will have little time for celebration. Though Liberia has made great strides under Sirleaf’s leadership, it could be decades before the country can stand on its own feet. With U.N. peacekeepers still primarily responsible for security, Liberia’s police force remains corrupt and ineffective, and its army numbers fewer than 2,000 troops. Though foreign assistance has been critical to Liberia’s revival, its annual flow easily dwarfs the entire government budget, which suggests a state that will long be at the mercy of its donors.

While Sirleaf, equipped with international goodwill, may be the best candidate to continue leading her country’s rebirth, she must eventually hand the reins to a new set of leaders. Even though she has drastically altered Liberia’s trajectory, she remains, like her challengers, part of the old order, and must operate within the confines of its established personalities and systems.

According to the Crisis Group’s Ajayi, a true transformation will only be possible with a new generation.

“We are seeing the same crop of people contesting the elections,” she said. “Nothing is going to change significantly unless we have a fresh set of people who are reform minded, who want things to change, and who are willing to put the resources behind that change.”

Jon Rosen is an independent journalist writing on sub-Saharan Africa.