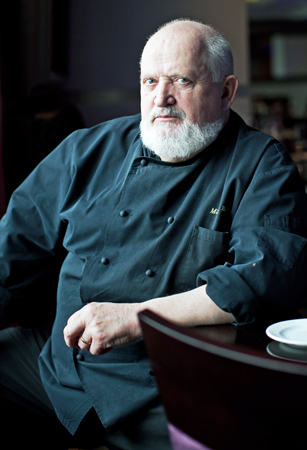 Michel Richard has been wooing Washington diners since he launched Citronelle in 1994, his flagship restaurant that immediately took hold and catapulted Richard — and in the process, Washington, D.C. — from national to international acclaim. Richard’s particular brand of California-nuanced French (or is it French-infused California?) was new to the area and set the watermark for fine dining that emphasized lighter and more creative dishes with a dash of humor.

Following the success of Citronelle, Richard eventually separated from his other ventures in California to make the East Coast his base, opening a second D.C. restaurant, Central, in 2007. Joining the ranks of celebrity chefs wishing to offer diners a more accessible venue to taste their wares, Richard designed Central along the bistro line and developed a menu that included classic yet casual foods such as burgers and fries, fried chicken, mussels and ribs. While the palate is very different, the approach to the food is much the same, whimsy in conception and design, with devout seriousness paid to the execution. Central has indeed been noted for offering the quality and consistency of its much pricier cousin.

This fall, Richard made his first foray out of the District while still remaining in the area (he also has restaurants in several other parts of the country), setting up shop in the space formerly occupied by Fabio Trabocchi’s renowned Maestro in the Ritz-Carlton at Tysons Corner. Group Goetz Architects (GGA) has transformed Maestro’s classically elegant space using sleek chrome, gray-blond woods, wine-colored upholstery, bright flashes of rouge, and a signature stacked-plate sculpture that create a sophisticated, modern, if a tad reserved look. Unfortunately the acoustics are lacking and even on weekdays with a mid-size crowd, it’s a bit hard to hear your table partners.

Nevertheless, an open kitchen gives diners the chance to observe executive chef Levi Mezick (formerly of the reopened Jockey Club) and his team at work interpreting Richard’s dining concept. Characterized as modern French on its website, the touches of artistry and playful flair that have so defined Richard’s cuisine both at Citronelle and Central are less in evidence at Michel than one might expect, though Michel does turn to both for inspiration. 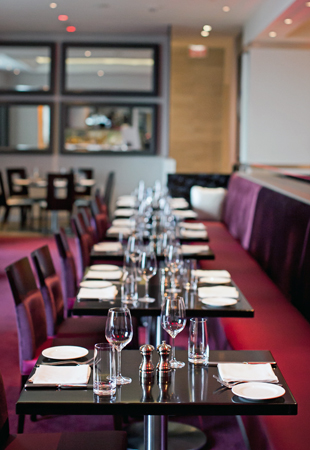 Group Goetz Architects transformed what was formerly the space occupied by Maestro to create a contemporary, sophisticated look for Michel, accented by sleek chrome and wine-colored upholstery.The restaurant offers some of Richard’s signature dishes such as the lobster burger, which are as good here as they are at Central. The menu also includes Central’s gougères, tasty little cheese puffs, and the goat cheese Caesar avocado salad, an interesting interpretation featuring a tightly packed romaine-and-cheese round drizzled with a mild dressing and served standing upright. It’s fun, but the avocado is barely evident.

Another notable continuation are the several varieties of tartar and carpaccio that Richard pulls off so deftly, with salmon, yellowtail, beef, eel and tuna each interestingly prepared and presented. But a truly exceptional appetizer is the plump diver scallops, which are sautéed until slightly caramelized on the outside while still tender and moist on the inside. Accented by cauliflower, couscous and brown butter (on the prefix menu) or with crispy onions and shallot jus, the scallops are near perfection.

Michel’s main courses fall somewhere between those at Citronelle and Central, with less of the California-inspired ethos highlighted among Citronelle’s often startlingly creative dishes, and fewer of the updated comfort foods on tap at Central.

Chef Mezick braises breast of veal with prosciutto and serves it over a bed of rich sunchoke purée. The veal is tender, the reduced sauces intense, and the artichoke purée mild and salty. Altogether, they make for a very tasty dish. A large roasted lamb shank, served in a bowl of rosemary-infused flageolet beans, is rich and meaty and has a slightly soapy but not unpleasant aftertaste. On the lighter side, the Parmesan ravioli is equally appealing. Served on top of wilted spinach and mushroom sauce, the pasta is nestled under a delicious parmesan crisp. The several side dishes on the menu align more toward the comfort food concept, with smooth-as-silk garlic mashed potatoes leading the way in satisfying sides.

An aspiring pastry chef by the time he was 14, Richard made his first serious forays into the culinary arts as an apprentice baker. Not surprisingly, desserts are treated with the utmost respect at Michel, with a fair selection of choices, many exquisitely prepared. Perhaps the most distinctly prepared is the Napoleon, made richer than the traditional version with the use of crème brûlée instead of pastry cream for the filing between layers. For taste alone, the apricot tart rustique is one of the best choices. Combining the brilliant color and the sweet tart taste of apricot with a rich yet mellow almond ice cream, it is a simple but delicious dessert. For statement, the celebration cake is the most dramatic choice. Topped with a burning mini Roman candle, the dessert is a sealed cylinder of chocolate leaf filled with layers of spongy cake, ice cream, pastry cream and fresh fruit.

Michel offers a substantial wine list featuring small boutique wineries but very few choices in the lower and mid-price range. And as at Richard’s other spots, the mixed drinks are delightfully fruity concoctions.

With his newest venture, Richard offers his diners more choice but also a bit of a conundrum. He has created a restaurant that has neither the exquisite service and elaborate dishes of Citronelle, nor the more laid-back charm and simpler dishes of Central. The food is consistently good, some of it approaching the inspired (those scallops!). The spot is attractive. Service is respectable, but it lacks the maturity and polish that so characterizes Citronelle, following instead the more casual approach of Central, though it’s not quite as proficient or comfortable as of yet. And Michel is quite expensive, at times excessively so, even for being in a Ritz-Carlton.

What Michel lacks is a distinctive character, the soul that guides Richard’s two restaurants in Washington. Perhaps that’s in part related to the fact that Michel is located is a hotel, where it must cater to a broader audience and cannot be as singular in its approach. Perhaps it is because Michel is in its early stages and will evolve its own unique personality in time. And perhaps it is simply because Citronelle and Central are so well established and defined that they overshadow their youngest sibling. Richard is still a master at marrying beautiful flavors, though not all marriages are created equal. As the newest addition to the Richard family, Michel may have to overcome some growing pains to find its identity, but it’s got the pedigree and support to mature into its expectation-laden namesake.