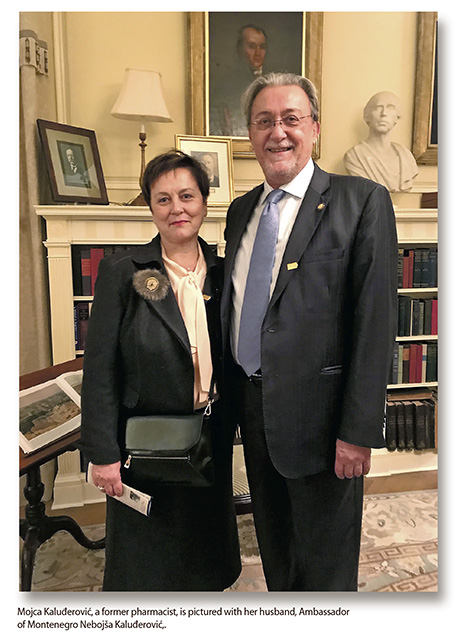 Mojca Kaluđerović and her husband, Ambassador of Montenegro Nebojša Kaluđerović, have been together far longer than the existence of the young country they represent.

Today, Kaluđerović, who went on to serve as Montenegro’s state secretary for political affairs, foreign minister and minister of European integration, has set up shop in D.C. with his pharmacist wife.

“I love my work,” Mojca Kaluđerović told us of being a pharmacist. “But I can’t work here. It would take two more years of school. I used to have my own pharmacy back home. I love working with people, helping people and [doing] the lab work. We make our own medications, following the doctor’s recipe. My mother is a pharmacist, too,” she said.

“My father was an agricultural engineer and we lived in [the former] Yugoslavia. My mother is Slovenian and my father was Montenegrin. They met in Croatia while they were university students,” she said, noting that she also met her husband while in school.

“My husband and I met at Belgrade University. My husband was studying law and I was studying pharmacy,” Mojca recalled. “Common friends introduced us. Now we have been together 31 years.”

“I liked her from the beginning,” said the ambassador, who had joined us from his office for the interview. “She looked good, she had character and she was calm, stable, easygoing — the opposite of me,” he quipped.

Like many Montenegrins, the Kaluđerovićs are also resilient. Nebojša Kaluđerović, who joined the Yugoslav Foreign Ministry in 1980, served a previous stint in the U.S. as third secretary in Yugoslavia’s U.N. Mission in the mid-1980s. But disillusionment with the Slobodan Milošević regime led him to leave diplomacy and work in Russia as a trade representative.

Following the bloodbath of the Balkan wars and Milošević’s ouster, Kaluđerović returned to diplomacy in 2000 as assistant minister for multilateral affairs for the Republic of Montenegro.

Today, he is the ambassador of a country that peacefully seceded from Serbia and now enjoys membership in NATO, the United Nations and the World Trade Organization.

“Since the U.N. is multilateral, it is more dynamic on a daily basis. In Washington, it is not that easy to get in touch with other ambassadors. You need to plan a lunch or dinner or talk with people at the receptions,” he said. “Here with all the think tanks, it is a full-time job. We also try to attend programs of the international studies programs at universities in Washington.”

Despite the differences and difficulties, the ambassador sees his job in simple terms: “You see, you feel, you meet. You tell different parts of the puzzle, the story of your country.” 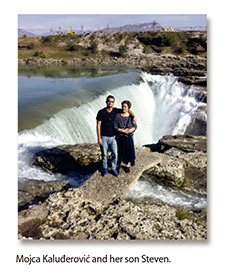 It’s a complicated story that stretches back 1,000 years. Montenegro, which means “black mountain,” sits along the Adriatic Sea in southeastern Europe. It passed through the control of several regional powers and the Ottoman Empire over the centuries, although it maintained a level of autonomy throughout much of its history.

Today, this tiny Balkan nation of over 620,000 people has a growing, open market economy and a multicultural population that considers itself a crossroads between East and West. Montenegro, which just joined NATO last June, also aspires to become a part of the European Union.

In fact, the country has been using the euro since 2002, although it is not a formal part of the euro zone. The European Commission has said Montenegro could join the EU in 2025. In the meantime, it will have to show the bloc that it is fighting corruption, improving the rule of law and strengthening its economy.

Tourism is a key part of the economic equation. In fact, tourism accounts for roughly 20 percent of Montenegro’s GDP, bringing in three times as many visitors as the country’s total population every year.

Despite its small size, Montenegro boasts a rich array of attractions and natural beauty. Besides the Adriatic seacoast and picturesque beaches, it is home to medieval cities and villages, as well as some of Europe’s most rugged mountains. It shares a deep lake, Lake Skadar, with Albania that draws adventure-seekers from around the world. Tara River Canyon is another popular site, while the Bay of Kotor has been called one of the most stunning bays in the world.

“Yes, we have more [cruise ships] than we ever did before,” Mojca said, noting that 400 cruise ships visited last year alone. “These are the big boats coming to our coast and into the Bay of Kotor. People can swim from May to October. Since it is only 40 minutes to our coast from Podgorica [the capital], you can go for lunch by the sea. We have great summer festivals with plenty cultural events. Our open sea festival is one of the most famous in Europe. We have famous rock stars like Madonna and the Rolling Stones,” she added.

“When we’re home, we meet a lot of Americans through the cruisers, especially young people,” she said. “More and more people are getting to know Montenegro; it’s getting better.” 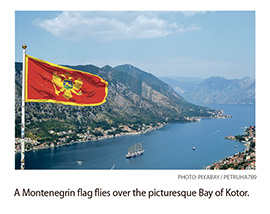 “I enjoy meeting others,” she added. “I think it’s harder to make friends here. I love New York. We were a young couple with a young son. After 10 years, we knew New York almost better than our hometown. We have our favorite restaurants, museums. It’s more dynamic than Washington. But Washington is more suitable for us now. It is smaller and easygoing. We enjoy the Kennedy Center and all the museums. We can do everything now; we are mobile.”

Meanwhile, their 28-year old son, Stevan, grew up in New York but now works in Montenegro, although Mojca still describes him as “an American guy.”

“He is an energetic guy,” added his father.

“We learned it is a warning sign when he says, ‘I have an idea!” his mother joked. “He knows what he wants. He’s not interested in politics,” she said. “He attended the City College of New York when we were there but last year he stayed in Montenegro when we left [for Washington]. He lives on the seacoast and is in the maritime industry. We hope he comes to see us soon. We miss him so much.”

Mojca herself misses daily life in Montenegro and its close-knit hospitality, which can be harder to find in large cities such as New York and D.C. “We are very warm people and have a relaxed lifestyle. We love to join friends and talk. When we meet someone new and like them, we invite them home for a meal.”