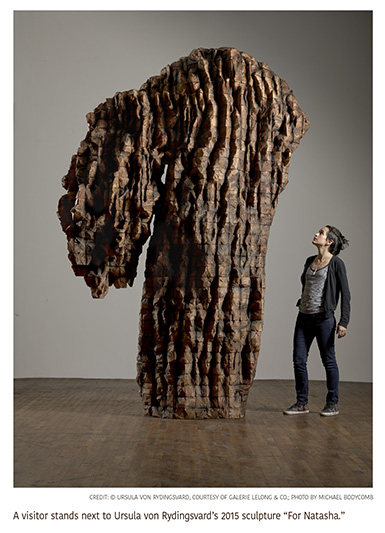 There’s a paradox at the heart of the Ursula von Rydingsvard exhibit at the National Museum of Women in the Arts (NMWA): Monumental sculpture that evokes inwardness.

Michelangelo may have envisioned the inside of a block of marble, but his David, like his Moses or his Pietà, is a very public display of public ideas. That’s not what you get with von Rydingsvard’s sprawling “The Contour of Feeling,” the most ambitious exhibition of the German-born, New York-based artist held in the United States.

Here is an artist using monumental forms to “shape” an interior landscape all her own. Her organic wood sculptures are, in a sense, an emotional outlet that allow von Rydingsvard to carve out a visual representation of her inner self.

You may read pieces like the early “Zakopane” (1987), a monumental wall installation of 22 interlocking vertical units, as cultural history. It evokes a space of shared seating, as in a Native American council lodge or the chapter house of a medieval cathedral. Or there you could tease out a more literal interpretation. The title, which refers to the name of a Polish town historically known for mining, suggests the vertical pieces and hollow vessels at the bottom might represent tools used by Polish peasants — a logical assumption given that von Rydingsvard comes from a long line of peasant farmers.

But ultimately, the history and meaning is shaped by and through the artist. The exhibit title, taken from a famous poem by German writer Rainer Maria Rilke, gives it away: A “contour” is merely an outline or an edge of something. It tells us where to look but not what to see.

Fortunately, von Rydingsvard helps us with that by providing a prose-poem about her work near the beginning of the exhibit. Titled “Why Do I Make Art?,” it reveals an unusual level of honesty about von Rydingsvard’s struggles as both artist and individual.

There is no career summation or authoritative artist statement here. Rather, von Rydingsvard admits that she makes her “monstrous pieces” in order “to survive” and because she wants “to get answers to questions for which I know there are no answers.” As a child refugee at the end of World War II and the daughter of parents who were forced laborers under the Nazis, it is not surprising that von Rydingsvard would feel these kinds of existential tensions, or that they would find expression, directly or indirectly, in her art. 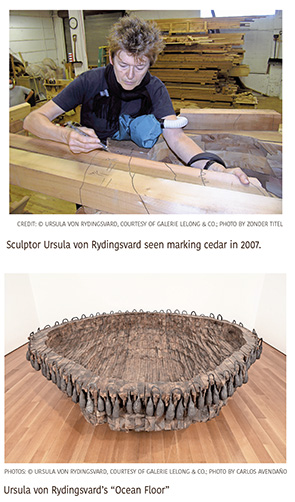 While von Rydingsvard — who spent her early childhood in the wooden barracks of refugee camps — resists attempts to identify her work with her background, she admits those crucial early years form an innate part of her subconscious. “Zakopane,” for instance, may hint at the wartime legacy of the eponymous Polish town that served as an underground staging point for the resistance during World War II.

The inward pull of von Rydingsvard’s work is underscored by her choice of materials and the organic shapes of the 26 sculptures represented here. Each of the monumental sculptures is made from carved cedar wood, some of them up to 22 feet long, often incorporating cavities and hundreds of perforated incisions.

“Thread Terror” (2016), measuring over eight feet tall and wide, is one such example. The dozens of carved curvilinear lines, squiggles and circles suggest something at once very familiar — sewing thimbles and thread or yarn, perhaps — and yet unknown. Are those “thimbles” really pincers hiding in wooden vegetation? Are we looking at an abstraction of modern domesticity or something from the dawn of creation?

Many of the sculptures evoke a similar sense of physical and psychic interiority, of the familiar and the totemic. “Apron” (1997), a large cedar and graphite wall hanging that hints at its title, almost seems a fetish of some indigenous people. “Ocean Floor” (1996), also of cedar and graphite and 13 by 11 feet in diameter, evokes nothing so much as the bottom half of a huge, primordial clam shell or perhaps a gigantic womb. Notably, its exterior is ringed with dried cow intestines sewn together as pouches and filled with peat moss. Intestinal membranes form the bulk of another sculpture, “Untitled (stacked blankets)” (2014), which juxtaposes the comfort and security associated with a blanket with the eerie translucence and insubstantiality of a vital organ. 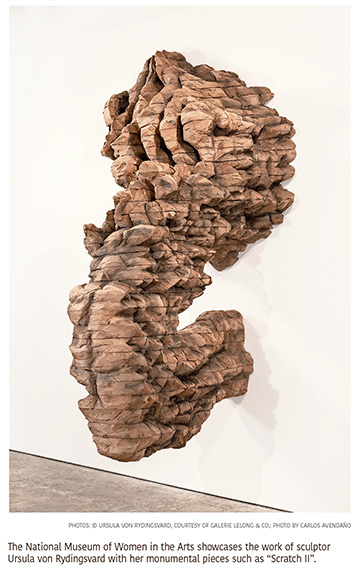 It is noteworthy that von Rydingsvard’s monumental sculpture is often presented in larger contexts than that of the more refined spaces of the NMWA. In a sense, the subtle, decorous, white-palette setting of this exhibit helps to emphasize the amorphous, primal, almost uncontainable nature of von Rydingsvard’s art. The single room that holds the monumental carved and serrated pieces “Krypta I” (2014), “For Natasha” (2015) and “Scratch II” (2015) could almost be an interior Stonehenge, where the artificial lights are always on and the shadows have explicit purposes. The meaning seems to be not beyond comprehension but fixed somewhere deeper in the psyche of the unconscious.

That is the feeling one gets when encountering “Droga” (2009) in the very first room — a heavy, floor-bound sculpture resembling a giant wooden sea slug or some ancient, extinct leviathan. Walking around to either end — it is 15 feet in length — one finds the “creature” has been partially hollowed out. There is no center. Only the contours remain to tell us what it once was, what, like its creator, it held inside. Some of the latter can be found in the 39-piece wall installation “little nothings” (2000-2015), which offers a glimpse of the interior of von Rydingsvard’s Brooklyn studio and the things she has collected there: Cow stomachs, a piece of her brother’s hair, sheep’s wool, thread, shells and photos, including one of the artist in this studio.

“The Contour of Feeling” also includes nine other intimate, collage-like works on paper. While they often exude the same type of immediacy as the sculptures, they cannot of course match their sheer presence. You may look at them but feel the more distant sculpture looking at you. But is it a kindly glance or something more sinister? Who knows. All the artist has given you are the contours and the edges. The interior meaning you must decide for yourself.

Deryl Davis is a contributing writer for The Washington Diplomat and an adjunct professor of drama, literature and film at Wesley Theological Seminary in Washington, D.C.