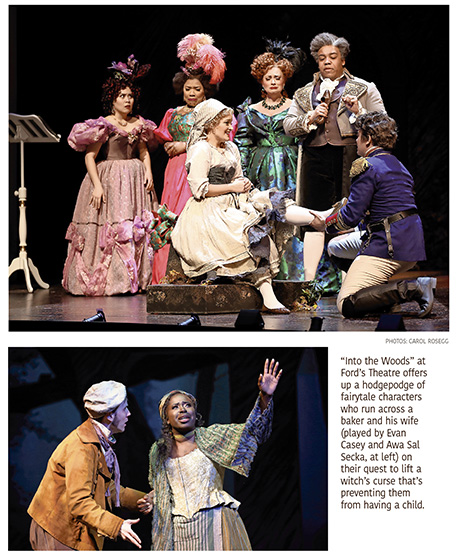 “Into the Woods” is an intricate cautionary tale that embodies the warning: “Be careful what you wish for.”

To prove the point, collaborators Stephen Sondheim (music and lyrics) and James Lapine (author of the book) intertwine the plots of several Brothers Grimm and Charles Perrault fairytales, including “Little Red Riding Hood,” “Jack and the Beanstalk,” “Rapunzel,” “Cinderella” and a made-up story for this play, “The Baker and His Wife,” who were made barren by an evil witch’s curse. The couple encounter this motley crew of iconic characters as they trek through the woods on a quest to lift the witch’s curse.

“Once upon a time, there were three houses in a far-off kingdom,” the narrator simply states at the top of the play. After that, chaos ensues, including results the characters didn’t nor want to see coming.

Some of them are thus: Cinderella finds her prince, who ends up disappointing her; the Baker’s wife, Jack’s mother and Rapunzel are crushed by the angry Giant; and Jack ends up on the Giant’s wife hit list for stealing the gold, hen and harp, not to mention killing her husband. Not your normal happily-ever-after endings one associates with fairytales.

Although on the surface, it appears to be a children’s show, the dark humor and fateful plot twists resonate with mature audiences. In addition to untimely deaths of the characters, the play contains its share of gore. Cinderella’s evil stepmother, for example, mutilates the stepsisters’ feet so they will fit the tiny slipper to prove they are the Prince’s elusive match.

But once one gets past the carnage and convoluted plot that at times is hard to keep up with, the play holds its own host of treasures. The night I was there, at the height of cherry blossom frenzy in D.C., the theater was filled with families with children of all ages, proving that this show is, indeed, for everyone.

The Ford’s Theatre rendition of the musical that’s been going strong since it debuted in 1986 is colorful, innovative and captivating. Directed by Peter Flynn, the production is a visual and musical delight, with the artistic team taking a lot of the credit.

Elaborate and detailed costumes by Wade Laboissonniere jump off the stage and bring the characters to life. Red Ridinghood’s wolves (two are in this story), played by Hasani Allen and Christopher Mueller, are clothed in leather and fur and walk on leg stilts, making them appear even more dangerous as they loom high above their prey. Milky White, Jack’s cow, (played by Tiziano D’Affuso), is a believable four-legged friend as he maneuvers, hunched over, in a white costume.

The witch, who has promised the Baker and his Wife a child if they follow her complicated and almost impossible instructions, wears alarmingly frightening makeup by Anne Nesmith. Rapunzel has a wig that might stretch the length of the stage. In addition, lighting designer Rui Rita creates magic with the scene where the wolf devours grandma and Little Red Ridinghood. The characters move behind a scrim and are somehow — with lighting tricks — replaced with cartoonish silhouettes performing the dirty deeds. The result is both comical and awe inspiring.

The singing and acting in this production are superb. The character who jumps out in this category is Jade Jones, who plays a formidable Ridinghood. Blessed with a powerful voice and large presence, she embodies an appealing Ridinghood who is comically unfazed by the wolf on her quest to visit her grandmother. The witch, portrayed by Rachel Zampelli, rivals Margaret Brainard Hamilton’s wicked witch in “The Wizard of Oz” movie based on her treachery and evilness. She taunts and enslaves both the Baker and his Wife and her daughter, Rapunzel, who she stole from the couple as punishment for stealing her magic beans. The Baker’s Wife, played by the lovely Awa Sal Secka, has both a pleasing voice and the acting chops to convey a barren woman who would break moral codes just for the chance to conceive.

In Act I, the characters manage to get what they wished for, including the Baker and his Wife, who give birth to a son. Meanwhile in Act II, most of their lives come tumbling down in an uncontrollable series of fated aftermaths.

After all the craziness, one has to be reminded of the big picture. For what would this story about magical and imaginary beings and lands be without a moral?  Not to fear: There is one.

The Baker and Cinderella explain in the song “No One Is Alone” that choices have consequences and that everyone is connected. And the story ends as happily as it can, considering all the mishaps. The Baker and Jack kill the Giant, restoring peace to the kingdom, and Cinderella, Jack and Ridinghood plan to help the Baker rebuild his home and raise his son. Meanwhile, the spirit of the Baker’s Wife comforts her mourning husband, encouraging him to tell their child the story. And so he does, as the cast sings, “Careful the Things You Say, Children Will Listen.”

And remember, the grass is always greener on the other side of the fence.