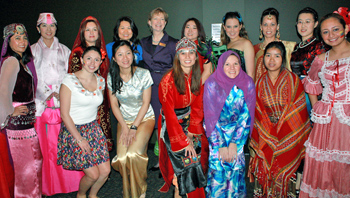 Pei-Wen Liu, a business undergraduate student from Taiwan who is living and studying near D.C.’s Dupont Circle, says she texts his father in Taiwan every day.

“If I’m very busy and forget it, he’ll complain!” she says, with affectionate laughter.

Her parents own an iron works company back home, and “I’m planning on going back to Taiwan to run the business with an older brother when they retire,” she said, noting that she and her brother plan to take the company global.

A graduate of Howard Community College in Columbia, Md., Liu began her academic journey in the United States at the two-year institution located halfway between Baltimore and Washington, D.C. She transferred this fall to the Dupont Circle campus of Johns Hopkins University’s Carey Business School to obtain her four-year college degree.

Howard Community College regularly holds events such as the “Arts Around the World” festival, above, and informal F-1 visa brunches to welcome its international students.

Accepted at a number of major U.S. universities before selecting Hopkins, Liu is one of the thousands of international students who follow a little-noted pathway to an American education: via one of the country’s many community colleges, where students can earn an associate degree or simply come for briefer studies or English-language classes.

In fact, according to the Institute of International Education’s Open Doors data, nearly 90,000 students from other countries were enrolled at community colleges in the United States in 2011.

Such schools, known for their smaller classes and far lower costs, offer associate degrees — the first half of a traditional four-year college degree — with many of their students transferring to universities to complete the second half of their undergraduate education. Community colleges also offer noncredit “enrichment” courses to the general public, technical and professional training, and standard college courses for credit. In short, they not only prepare students for undergraduate degrees, they also prep them for jobs in accounting, biotechnology, multimedia, health care, computer science and a plethora of other fields.

Nearly half of all U.S. undergraduates are enrolled in them, according to the American Association of Community Colleges (AACC), and they are increasingly the colleges of choice for well-prepared high-school students from cash-strapped middle-class families.

“Community colleges are an American invention that put publicly funded higher education at close-to-home facilities, beginning 100 years ago,” says the AACC website. “[They are] inclusive institutions that welcome all who desire to learn, regardless of wealth, heritage, or previous academic experience.”

This “open-access policy” reigns at most of the roughly 1,600 such institutions across the United States, where two-year colleges are known for serving a multicultural tapestry of different ethnicities, economic backgrounds and ages. They’re home to 18-year-olds fresh out of high school, busy working adults, veterans, newly arrived immigrants, international students and many others. 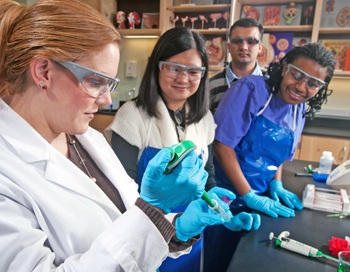 Home to six campuses and nearly 80,000 students, Northern Virginia Community College (NOVA) is one of the largest community colleges in the country — and one of the most diverse, with 8,500 international students from about 180 different countries studying there last year.

And as the economy puts a crimp on college plans across the country — where some of the most elite private universities can run upward of $60,000 a year — community colleges, which typically cost a few thousand dollars a year in tuition, are becoming an increasingly popular option.

More than that, they’ve become a national necessity as the United States seeks to build an educated workforce that can compete in a 21st-century globalized world — one where a high school degree just won’t cut it anymore.

But community colleges are more than just money-saving blips on the way to “real” college or workshops for basic vocational training. They’re increasingly being recognized for the rigorous caliber of education they provide — which in turn is what attracts students like Liu and others from around the world to them.

Northern Virginia Community College (NOVA) is one of the largest community colleges in the country, with six campuses and nearly 80,000 students. Last year, 8,500 of them were international students from about 180 different countries, and during the 2012 spring semester, NOVA had 1,460 students with F-1 visas enrolled in its credit courses, according to the school’s Office of Institutional Research, Planning, and Assessment.

Of the 1,398 students classified as “international” who are enrolled this year at Howard Community College (which has a total student population of 30,000), most are either international U.S. citizens or permanent residents with green cards, according to Patricia Bylsma, Howard’s assistant director of international admissions; 184 are full-time students from other countries who have F-1 student visas.

Montgomery College in Maryland had 845 full-time F-1 visa students from other countries last year. But, as is the case at Howard and NOVA, that’s only part of the picture. According to the school, there were more than 8,000 non-U.S. citizens enrolled in the fall 2011 semester, and they represented 171 different countries. Ethiopia, Cameroon, El Salvador, Peru and China were the top five countries.

And of the nearly 27,000 students on Montgomery’s three campuses in Germantown, Rockville and Silver Spring, about 30 percent are black, 15 percent Asian, 13 percent Hispanic, and 10 percent multiracial. 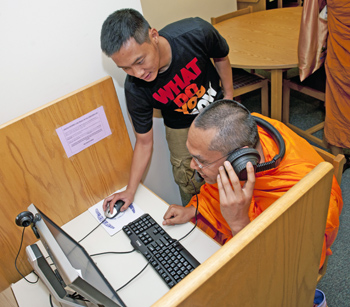 Dr. Wannachai Chayawanno, a Buddhist monk from Mahachulalongkornrajavidyalaya University in Thailand, receives a demonstrationin the writing lab by a student from Montgomery College’s Germantown campus, one of three campuses that the well-regarded Maryland community college has.

This melting pot at American community colleges is, in fact, one of the big draws for foreign students like Thaiza Julião of Brazil. Julião arrived in the United States with a bachelor’s degree in business, but she’s working on an associate degree in accounting at Montgomery College before moving on to get her master’s in business administration.

“What I love the most about Montgomery College is the opportunity to learn about other countries and cultures as you interact with your classmates,” she said. “And the professors are very supportive.”

Julião’s praise of Montgomery’s diversity is echoed by Pei-Wen Liu, who lauded the various connections and student support that Howard Community College (HCC) afforded her.

“I feel like HCC has good programs to help international students. I started my studies at HCC’s English Language Institute, got a lot of help and met a lot of people — professors and students, staff. Howard’s a great place to build up your [personal and professional] connections.”

Howard is also well connected to major four-year universities, she added, “making it easy to transfer.”

“Our classes are small, and we’re good at making ourselves available to students,” said Howard’s Bylsma, who spoke to The Diplomat the day of an “F-1 brunch,” an informal drop-in event where international visa students can socialize. “We do walk-in advising as well as personal one-on-one and social events,” she noted.

There are no dorms on campus — typical of community colleges — but Bylsma said students are encouraged to take part in school clubs, cultural events, sports and volunteer projects. “We want students to break out of their comfort zone, in part because major universities want to see extracurricular activities and well-rounded applicants.”

“I feel this approach opened my mind,” Liu said. “When I came to the U.S., like many Asian students, I was shy. Here you have to speak up in class and come out of your shell so you can show people who you are.”

At Howard, where Liu immersed herself in English-language studies for a year, Liu said there are many activities outside of the classroom, such as “first Friday” parties at a professor’s house where faculty mingle with international and American students. She took advantage of such opportunities, worked on campus, and participated in Howard’s “Arts Around the World” festival. 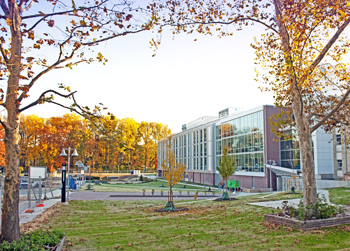 Howard graduates with associate degrees go on to graduate from top universities across the country, Bylsma said, mentioning schools in Indiana, California and Minnesota as well as along the eastern seaboard. Students at the English Institute (a school within the school) have done the same, transferring to two- and four-year institutions.

“I want to create my own life and do something significant with it,” Liu said of her journey to date — and of her future. She appears well on her way to doing just that as she begins her international business studies at Johns Hopkins.

Along the way, she’ll of course stay in touch with her family on a regular basis. “And you know,” she said, “I think my dad is just as excited about my studies at Hopkins as I am.”

Carolyn Cosmos is a contributing writer for The Washington Diplomat. She has taught at Montgomery College, Prince George’s Community College, the Metropolitan School of Professional Studies at the Catholic University of America and the University of Maryland.