Actor Félix de Givry, above left, portrays a French garage house DJ in the 1990s, based on the real life of Sven Hansen-Løve, the co-writer of “Eden.”

In January 2015, French director/co-writer Mia Hansen-Løve and lead actor Félix de Givry presented their music-inspired feature “Eden” at the Sundance Film Festival. Hansen-Løve and her brother Sven Hansen-Løve co-wrote the intelligent, complex script about his real life as a French garage house DJ. The film captures perfectly the excitement of the French electronic dance music scene of the 1990s that entranced a generation with its promise of happy beats, thrills and freedom. Yet “Eden” isn’t a straightforward music movie that glorifies the leading players as largely heroic figures.

French leading man Givry astutely portrays Sven’s alter ego, Paul, a student of literature. In 1992, his academic studies become sidetracked when he discovers garage house, a musical import from the United States. Following endless delays and lack of progress on his neglected thesis, his advisor essentially kicks Paul out of his literature program. Already a fledgling DJ, Paul plunges full time into the business, becoming a pioneer of the “French touch,” the 1990s French house music movement.

After starting a DJ duo with his pal Stan (Hugo Conzelmann), Paul naturally segue-ways into party promotion for their own events. Along the way, he picks up a range of girlfriends and hanger-ons, each of whom complement him in a way that underlines his character development. Paul enjoys a fleeting modicum of success, flying to New York to play a famous daytime party.

But he never climbs anywhere close to the heights of success enjoyed by Daft Punk, a duo that inhabited the same Paris dance music circles, played in the movie by the actual members of Daft Punk. (In a running gag, they can’t get into parties — even after they are famous — because they perform in real life wearing face-obscuring helmets.)

In the end, Paul succumbs to the overwhelming weight of his troubles: the darkness of the club scene, his drug addiction fueled within the electronic music culture and his crushing debt to his longtime overly indulgent mother (played by Armenian-Canadian actress Arsinée Khanjian with raw emotion). He gives up the not-so-glamorous DJ life for an office job, returns to his writing pursuits and starts to develop a normal romantic relationship with a woman he meets in a literary class.

With the siblings’ balanced story and Mia’s even-handed direction, “Eden” honestly illuminates Sven’s real-life emotionally taxing moments of both elation and struggles as a DJ. Even though the script was considerably trimmed from its earlier draft as a two-part movie, “Eden” still paints a thorough portrait of Sven’s two-decade career in the notoriously tough music and club industry. If anything, the pacing may be a tad too slow, and the film might benefit from crisper editing.

The filmmakers behind the documentary “Cartel Land” gained remarkable access into the daily lives of two vigilante groups battling the Mexican drug cartels.

The Mexican-American documentary “Cartel Land” left a big impact after its world premiere at the Sundance Film Festival, where buzz grew that it was one of the must-see movies. Matthew Heineman’s well-paced directing creates a vivid, dramatic feature about the battle against Mexican drug cartels, transcending the stillness of traditional documentaries.

The hyper-realistic mise-en-scène starts with awe-striking initial actions by the director and his crew. They risked their lives by ingraining themselves into the day-to-day existence of two vigilante groups fighting the cartels: the Arizona Border Recon and the Autodefensas, one on each side of the U.S.-Mexico border. The filmmakers gained remarkable access into the underpinnings of these little-known paramilitary organizations, showing revealing footage while keeping themselves out of the picture.

Their members banded together following mounting concerns about the ability of local and federal law enforcement officers to stem the growing tide of criminal excesses by the brutal Mexican drug cartels. The people took matters into their own hands, becoming independent security forces to defend themselves. Yet the actual story is not so black and white separating the heroes from the villains.

The Autodefensas grew out of the Mexican state of Michoacán in response to the viciousness of the dominant Knights Templar drug cartel. The Autodefensas are headed by the small-town physician Jose Mireles, known to his followers as “El Doctor.” Meanwhile, the Arizona Border Recon patrols the 52 miles of the “Cocaine Alley” that runs through Arizona. U.S. military veteran Tim “Nailer” Foley oversees the small militia whose goal is to keep the drug cartels’ violence from seeping into the United States. 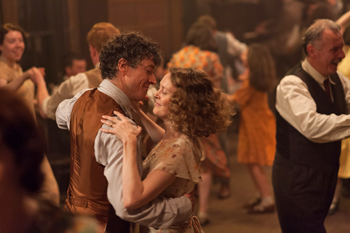 Irish actors Barry Ward, Jim Norton and Simone Kirby presented the North American premiere of “Jimmy’s Hall” at the 2015 Tribeca Film Festival. The screening was a highly anticipated event, being the 24th and latest feature from renowned activist British filmmaker Ken Loach. The left-leaning director is well known for the consistent quality of his socially conscious body of work, such as “The Wind that Shakes the Barley,” for which he claimed the 2006 Cannes Film Festival’s coveted Palme d’Or.

“Jimmy’s Hall,” which made its world premiere at Cannes in 2014, isn’t exactly in the league of Loach’s best films. But it’s still worth a look as a more than serviceable feature by a world-class auteur, especially as hearsay suggests it may be the last for the 77-year-old. As usual, Loach’s direction is consistently up to par, enabled by masterful 35mm film cinematography mostly shot in natural light by director of photography Robbie Ryan.

Adapted from Donal O’Kelly’s play, Paul Laverty’s well-crafted script deftly supplements the scattered historical facts known about the legendary Irish figure James Gralton, a.k.a. the eponymous Jimmy, a political activist who was accused of communism during Ireland’s Red Scare and became the only Irish citizen to be deported from his own country.

The excellent ensemble cast is led by Irish star Barry Ward, who impressively occupies the role of Jimmy, demonstrating how his charisma and passion correlate with his popularity as a community leader. Veteran Irish character actor Jim Norton makes a formidable archenemy playing Father Sheridan.

Set in Ireland, “Jimmy’s Hall” unfolds in the 1930s, about a decade after the War of Independence depicted in “The Wind that Shakes the Barley.” Pre-war, in solidly Catholic southern Ireland, Jimmy established the Pearse-Connolly community hall, a multipurpose community center that hosted dances as well as instruction and discussions for the likes of music, sports, literature and politics.

All this made him an enemy of the conservative Catholic leaders wielding local power, who saw Jimmy’s efforts as an encroachment against their domain controlling education and politics. Jimmy escapes to the United States, building a new life for himself in New York over 10 years. After his brother passes away, though, Jimmy feels compelled to help manage his family farm for his aging mother (Aileen Henry in a fine turn), so he returns to Ireland and to his ex Oonagh (Simone Kirby), who is now married with children. He is still revered by many people for founding his beloved hall, which he is persuaded to reopen. But the powers that be, using fear and politics, are still just as determined to keep Jimmy’s hall closed.