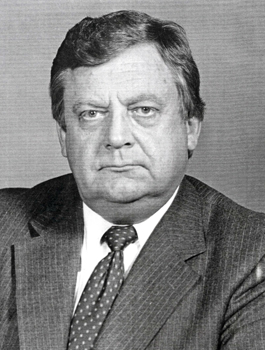 For many of us in the United States Foreign Service, Lawrence Eagleburger, who died June 4, was a larger-than-life figure who left an indelible mark on our institution and on our lives. Eagleburger, who served and later often closely advised a string of U.S. presidents from John F. Kennedy to George H.W. Bush — and was briefly Secretary of State himself — was a diplomat who went after every tough issue there was.

His courage was matched only by his determination and humor. He wouldn’t so much vanquish his adversaries as make them melt in his presence. It was appropriate that he was the only Foreign Service officer to become Secretary of State. Indeed, had he been appointed in late 1992 for longer than the interregnum between the Bush and Clinton administrations, he arguably would have been the best secretary of state the U.S. ever had.

In the Foreign Service, one’s first ambassador is a very special person. Mine was Eagleburger. I met him in 1978 in his office at the U.S. Embassy in Belgrade for my required “courtesy call,” a stress-inducing event on every newcomer’s arrival checklist. I had just arrived as the “assistant commercial attaché,” a rather modest position, appropriate to a 25-year-old junior Foreign Service officer.

Lawrence Eagleburger, who died June 4 at the age of 80 after a heart attack, was a foreign policy advisor to U.S. presidents over a span of 40 years and served for 42 days as secretary of state at the end of President George H.W. Bush’s term.

Eagleburger told me what he was trying to do in Yugoslavia in the twilight of President Josip Broz Tito’s life: weave a web of relations with Yugoslavia such that it would keep the country from going in another direction. He had, after all, first been assigned to Yugoslavia in 1963, and become known as “Lawrence of Macedonia” for his relief work after the Skopje earthquake in August of that year.

I listened carefully to his explanation of my role in the “web of relations.” His capacity to link the tactical task of assisting visiting U.S. businessmen to the strategic goal of managing the coming post-Tito Yugoslavia was extraordinary. I had been scared to death for the entire 20-minute meeting, but I walked out a little taller for having realized that he valued my job. I felt an instant sense of loyalty to him, maybe partly because I sensed that he would be loyal, too. And he always was.

Of course, another reason I was so frightened to enter his office was his legendary temper. I saw it many times on the tennis court. As one of the most junior officers in the embassy, I was often summoned as an emergency fourth player for tennis at the ambassador’s residence. Eagleburger, who was short, but only a little overweight at the time, would range over the court, not particularly mindful that he was playing doubles. He wielded a Wilson T-2000, an all-aluminum, state-of-the-art racket at the time, ugly and unbreakable — and potentially lethal when hurled at warp speed after a failed lunging shot. I can remember diving for my life to the dirt, and hearing the menacing whir of the flying metal racket, accompanied by Eagleburger cursing at himself.

Tito died in May 1980, after a six-month illness. Eagleburger argued forcefully with the White House, ultimately without success, that the president should lead the U.S. delegation to the funeral. As a junior officer accompanying him to commercial events, I was often privy to his comments about some of his Washington interlocutors: “a mile wide and an inch deep,” was how he described a very senior member of the Carter administration at the time.

He never shrank from taking on Washington or letting officials there know what he thought. “I didn’t come here to preside over a post office,” he wrote in protest against delivering what he considered a useless note to the Yugoslavs. Then he explained a better course of action, admonishing that “pique is no substitute for policy,” a line I always remembered — and had many occasions to use.

The Ambassador, as I would always call him, went on to bigger and better things. He was Undersecretary of Political Affairs in 1989 during the Polish and Central European revolutions, overseeing and spearheading U.S. assistance.

But his health — even 20 years ago — started to fail him. As the State Department’s desk officer for Poland, I accompanied the intrepid and iconic Polish democratic revolutionary Jacek Kuron to Eagleburger’s enormous seventh-floor office. Eagleburger, then in a wheelchair because of his knees and phlebitis, coughing from his cigarette habit and his asthma, instantly recognized a kindred spirit in Kuron. When Kuron asked if he could have a cigarette, Eagleburger, frustrated perhaps by his doctors’ nagging advice and new State Department regulations, responded: “You smoke?!? Fantastic! I’ve got some,” whereupon he whirled his wheelchair 180 degrees, and headed at breakneck speed to his desk. He and Kuron lit up, and it took us hours to pull them apart.

I visited him a few years ago at his home in Charlottesville, Virginia, and we talked for a couple of hours. He wanted to know all about the negotiations with North Korea, and I described some of the more theatric moments. He laughed at my admitting that I had borrowed some of his performance art. “That’s all right, Hill. Glad you learned something from me.”

“How do you think the Foreign Service is doing,” he asked. He was worried that we’d surrendered too much of our role to the military. I told him that we would be fine, and that we would do our duty in Iraq and Afghanistan, military engagements about which he had great concerns.

“Just make sure our people show some guts,” he responded, and he lit another cigarette.

Christopher R. Hill, a former U.S. assistant secretary of state for East Asia, was U.S. ambassador to Iraq, South Korea, Macedonia, and Poland, U.S. special envoy for Kosovo, a negotiator of the Dayton Peace Accords, and chief U.S. negotiator with North Korea from 2005 to 2009. He is now dean of the Korbel School of International Studies, University of Denver. He was also profiled by The Washington Diplomat in the December 2008 cover story “Disarming Presence: U.S. Envoy Negotiates Fine Line With North Korea.”