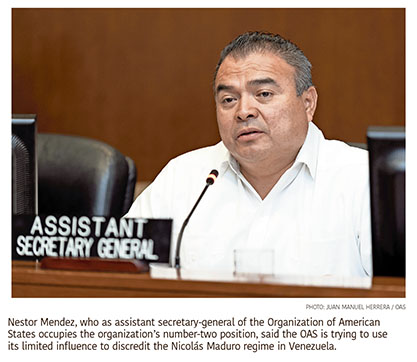 Venezuela’s ongoing political chaos continues to dominate Latin American headlines, with the massive exodus of migrants from Central America also inflaming passions in the United States, Mexico and elsewhere throughout the hemisphere.

Yet the Organization of American States — the main body formed to deal with such emergencies — finds itself unable to do much about either crisis other than issue proclamations, pass resolutions and attempt to shame bad actors into doing the right thing.

At the OAS’s 49th General Assembly in Medellín, Colombia, OAS Secretary-General Luís Almagro of Uruguay admitted as much, while dismissing any possibility of military intervention in Venezuela.

“To remove the dictatorship of the 21st century, there is no magic formula,” he declared. “We hope that political pressure continues to accumulate.”

It was a stark admission for Almagro, one of the most vociferous critics of Venezuelan President Nicolás Maduro, that the momentum to oust the embattled Chavista protégé has stalled despite a raft of U.S. sanctions on Venezuela, including on its vital state-run oil sector. More recently, President Trump further tightened the noose by freezing all Venezuelan government assets in the U.S. and authorizing sanctions on foreign companies and individuals that do business with the Maduro administration.

Whether Maduro will survive the latest U.S. restrictions — which put Venezuela in a league with Cuba, Iran, North Korea and Syria — remains to be seen. But a concerted international push to oust Maduro by supporting Juan Guaidó, the self-declared president who has been recognized by over 50 countries, has failed to gain traction (also see “Exclusive: Venezuela’s U.S.-Recognized Envoy Insists Democracy Will Triumph Over Dictatorship” in the March 2019 issue).

Meanwhile, peace talks between the government and the opposition have been slow-going, with the latest round of U.S. sanctions threatening to derail the negotiations.

It’s been over six months since Guaidó tried to get Venezuela’s military forces to switch sides by instigating a showdown over Maduro’s humanitarian aid blockade. But so far, Maduro has retained the support of the military, which is deeply entrenched in the country’s business interests.

Guaidó’s attempts to essentially force a military coup and the U.S. pressure campaign — which includes reports that the Trump administration secretly met with Venezuelan military officers hoping to depose Maduro — have divided the region, where any talk of regime change stirs ugly reminders of past U.S. meddling in Latin America.

Meanwhile, the OAS has become a microcosm of these divisions. The June 26-28 gathering in Colombia took place three months after the 35-member body voted to accept representatives of Venezuela’s political opposition led by Guaidó and expel the delegation that represents Maduro. 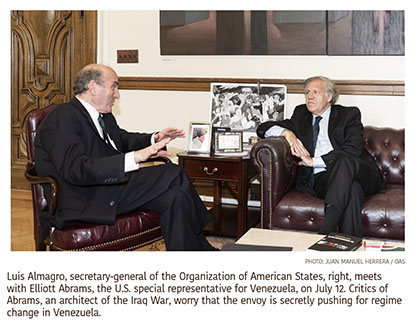 That led the delegation from Uruguay — Almagro’s home country — to walk out in protest. “Uruguay considers this an attempt to impose the recognition of this delegation as legitimate representatives of Venezuela. It is no more and no less than a subjugation of the legality of the OAS,” thundered Ariel Bergamino, Uruguay’s vice foreign minister. “There is no other choice but to be against an act of this nature.”

The continuing standoff between Guaidó and Maduro, who in April 2017 announced his intention to withdraw Venezuela from the OAS, has caused the country’s oil-based economy to collapse. That has exacerbated the humanitarian crisis in Venezuela, where everything from food to electricity is in short supply, the homicide rate has skyrocketed and nearly 90 percent of the country’s 30 million people now live in poverty.

The miserable conditions have created more than 4 million refugees, with most of them fleeing to neighboring Colombia, Peru and Brazil. The Venezuelan crisis has overshadowed those of other countries in turmoil such as Haiti and Nicaragua.

Nestor Mendez, who as assistant secretary-general (ASG) occupies the organization’s number-two position, said the OAS is trying to use its limited influence to discredit the Maduro regime.

“This issue has been before our Permanent Council for a long time,” he said. “They have decided that the government of Nicolás Maduro is illegitimate because of the way the last elections were conducted. The Permanent Council has also accepted the ambassador designated by Juan Guaidó as Venezuela’s representative.”

Yet the ASG conceded that “this case has been different, and the secretary-general has been pushing really hard to defend the principles of the institution. We don’t have peacekeeping forces like the United Nations. We depend on moral authority.”

Mendez, 48, spoke to The Washington Diplomat recently from his office at the OAS headquarters on Constitution Avenue. From 2008 to 2015, Mendez represented his native Belize as ambassador to both the United States and the OAS. He was elected to his current role in March 2015 and assumed his post four months later; his term expires in July 2020 and he’s already begun working on his re-election campaign.

As ASG, Mendez is in charge of the OAS Secretariat when Almagro isn’t present. He’s also secretary of the Permanent Council and the General Assembly, and supervises the OAS network of offices in each country.

“By and large, we have democratically elected governments in every country, [but] thinking of democracy as a static situation is erroneous,” he said. “We work at strengthening our democracies every day and making them better and more reflective of the desires and requirements of our people. We will always keep working on being more democratic.”

U.S. taxpayers basically keep the OAS afloat, accounting for just over 59% of the organization’s fiscal 2020 budget of $82.7 million. Asked outright if the organization is perceived to be Washington’s puppet, Mendez replied: “There is always that kind of suspicion.”

We also asked the ASG about the Central American migrant crisis and the Trump administration’s efforts to not only build a massive wall along the U.S.-Mexico border, but also to deny asylum to the tens of thousands of people — mainly women and children — fleeing violence and poverty in countries such as Guatemala, Honduras and El Salvador. 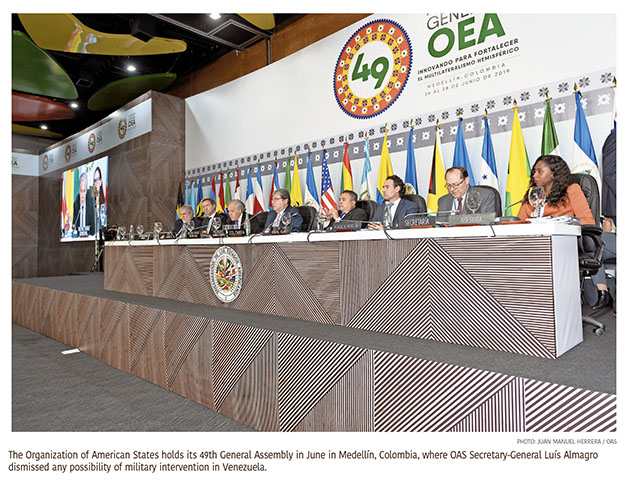 “We have an obligation to work with all our member states,” he said, pointing out that “the U.S. is a very important member state, covering more than half of our budget.” He also acknowledged — in what may fairly be called the understatement of our interview — that migration from Central America is among some “very specific issues that have captured the attention” of the White House.

In truth, it has become Trump’s rallying cry, with some even suggesting that the president’s draconian threats to close down the border have encouraged even more would-be Central American migrants to attempt the dangerous trip across Mexico before his promised $25 billion wall actually becomes reality. Moreover, the president’s decision to cut U.S. aid to Northern Triangle countries — money that helps address the very problems that are driving Central Americans to flee — has been labeled as counterproductive by his critics.

Even so, Mendez said the OAS is doing what it can — with limited resources — to help people on the ground.

“We have a situation in the Northern Triangle where many people risk their lives to come north. The OAS has been working with these governments to try to address the substantive reasons why people see themselves forced to migrate. Climate change is driving water issues. There’s also crime and gang activity. People feel insecure,” Mendez said.

“We try to work with these countries to alleviate the core problems, but we’re also managing the issue of migrants from the perspective of human rights. We believe the fact that people are forced to leave their country does not automatically deprive them of their rights as human beings. We as an institution are acutely aware of this.”

Larry Luxner is the Tel Aviv-based news editor of The Washington Diplomat.