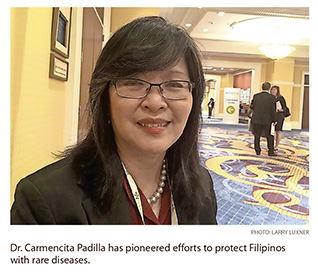 The Philippines may trail wealthier ASEAN member states in terms of direct foreign investment, per-capita income and life expectancy, but when it comes treating people with rare diseases, this nation of 103 million inhabitants strives to be the best in the region.

In fact, it’s the only country in Southeast Asia that has passed specific legislation to protect citizens who have rare disorders like muscular dystrophy, pulmonary hypertension, epilepsy, cystic fibrosis and Angelman syndrome.

Dr. Carmencita Padilla is founding chair of the Philippine Society for Orphan Disorders and chancellor of the University of the Philippines in Manila. She says the Rare Disease Act of 2016 — approved by Congress after years of intense lobbying — is a singular accomplishment in a part of the world not known for doing much on behalf of the estimated 8 to 10 percent of adults who suffer from a rare disease.

“The Philippines is still a developing country, and this was not a government priority. In fact, we had very little government support,” said Padilla, who set up her nonprofit society in 2006. “It was difficult to convince the Ministry of Health to even provide a budget for patients.”

Padilla spoke at the 2018 World Orphan Drug Congress USA, held in late April at the Gaylord National Harbor Hotel in Oxon Hill, Md. Her presentation, “How a Newly Passed Rare Diseases Act is Unlocking an Emerging Market’s Commercial Potential,” was one of 15 on the status of rare diseases in other countries including Brazil, Canada, China, India, Japan, Russia, South Africa and Sweden.

“Because of the difficulty in getting the government engaged, the law provided for insurance coverage of newborn screening as of December 2017,” she said.

In fact, newborn screening facilities now exist on more than 7,000 islands in the Philippines. Yet there are only 10 geneticists in the entire country — and 2 million babies are born every year.

“We are saving newborns from mental retardation and death, but because of the increasing number of patients with rare diseases of all ages, we had to start working on how we’re going to get the government interested in paying for their care.”

In the Philippines, a rare disease is defined as any condition that affects no more than 1 in 20,000 patients. That compares to the 28-member European Union, which uses 1 in 2,000, and the United States, where a rare disease is anything afflicting fewer than 200,000 people.

Yet part of the problem is that attention is always given to diseases such as tuberculosis or diabetes that affect large numbers of people. In addition, there is fierce competition for money; millions of Filipinos could be immunized against a contagious disease for the cost of treating 100 spinal muscular atrophy (SMA) babies with Spinraza — a therapy developed by Biogen that costs $750,000 the first year and $375,000 every year thereafter.

This ultra-expensive drug isn’t even available in the Philippines. However, Australia, New Zealand, Japan, Hong Kong, Taiwan and South Korea have all approved the treatment to treat SMA.

The fight to get the Rare Disease Act passed took eight years, noted Padilla, whose organization joined the Volunteer Youth Leaders for Health in collecting 500,000 signatures to finally get the legislation passed.

“The law itself provides the framework for access to treatments by patients with rare diseases. It is comprehensive, integrative and sustainable,” she said. “The law provides access to health information and medical care, including medication for their conditions. It is not yet national, though. What we’re waiting for now is that every hospital will give us the lists of patients who have been diagnosed with rare diseases.”

The pediatrician added: “I need more government engagement. This law is different because it’s not only about access to treatment. It also provides schooling and education. But I still believe that coverage and access through insurance will be my key for success.”