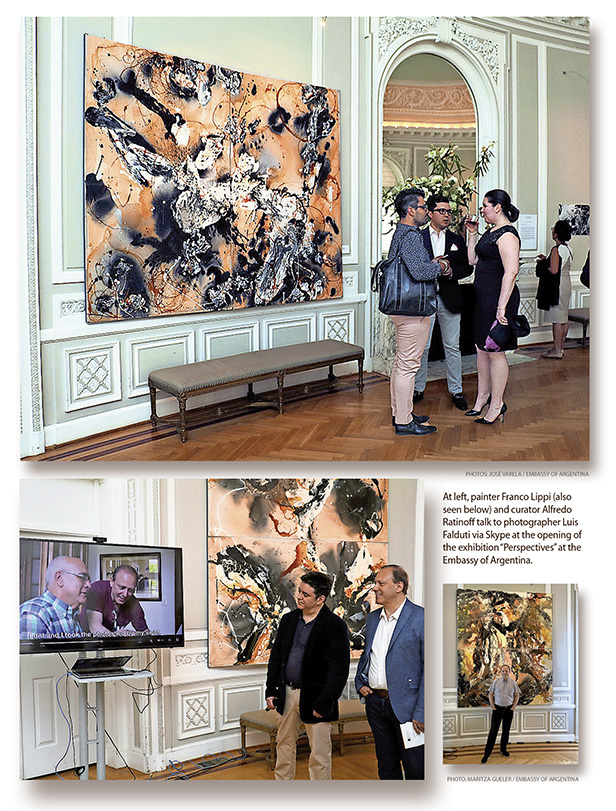 When viewing any abstract artwork, everyone interprets a different emotion and understanding of the piece, like a Rorschach inkblot test. “Perspectives” at the Embassy of Argentina art gallery celebrates the subjective, highly individual reactions that art inspires, as well as the multilayered interplay of different art forms.

The exhibit showcases the overlapping work of Argentinian painter Franco Lippi and Argentinian photographer Luis Falduti. Lippi’s large-scale paintings fill the walls of the gallery with their bold and dizzying swirls and splotches of black, gray, white and rust, which walk the line between dreamscape galaxies and volatile explosions.

Between the large paintings are Falduti’s black-and-white photos. At first glance, the images appear as if they were taken from NASA space cameras that zoomed in on ethereal constellations of stars or the pockmarked surfaces of planets. But upon closer examination, we see that the photographs are in fact close-up depictions of Lippi’s paintings. The photographs bring out details in Lippi’s paintings that might otherwise be overlooked, with the aim of exposing the enigmatic layers and hidden messages in his work.

The resulting interplay of painting and photography explores the ephemeral colors and vast, complex compositions portrayed in Lippi’s world, which is rediscovered and redefined through Falduti’s lens. The side-by-side display demonstrates the power of collaboration, as photography and painting complement each other, rather than competing with the other.

“They could be landscapes of my soul,” said Lippi, who attended the exhibition opening, about the inspiration behind his paintings. “They could be journeys through the cosmos. They could be a combination of factors — my inner sort of conscious.”

The collaboration between the two artists was not originally planned. Lippi’s paintings were initially created for a separate exhibit in Italy that was then transferred to a museum in Buenos Aires. This is where Falduti was invited to take photographs of the paintings.

“I thought he was going to take a picture of the whole work,” recalled Lippi. “But no. He took shots of the paintings. He took fragments of the painting. He went into the smaller areas of the paintings, seeing areas that I hadn’t even discovered, creating a completely new concept that I, the artist, had not seen.”

Falduti, who spoke at the D.C. debut via Skype, explained the process behind his photography.

“When I take a photograph of an abstract painting, I see another image and what I want to do is show you what I see in it,” he said.

Experimenting with photography runs in Falduti’s blood. His father was a photographer who would give Falduti overexposed negatives to draw, paint and scratch on when he was as young as 4 years old. Falduti would then make homemade slideshows out of his creations. The intricate images in the current exhibit are reminiscent of overexposed or destroyed film slides.

After seeing Falduti’s work, Lippi wanted to create a show highlighting both the photos and his paintings together.

When he initially proposed a show combining photography and painting, “people said, ‘Are you crazy? This is not going to work,'” Lippi recalled. “They are two different mediums. It’s not going to look right. And I said, ‘No, they are going to complement each other. They are going to blend together.'”

They do just that, seamlessly. “Perspectives” is a cohesive show that is also a study in contrasts, with the photos enhancing the detail of the paintings while at the same time standing on their own merit.

Curator Alfredo Ratinoff admitted that he had his doubts when he was first approached about the idea. “But then I saw the combination of the two bodies of work [and] I thought this is amazing, because the two of them working together is creating a synergy.”

Nicole Schaller is an editorial intern for The Washington Diplomat.