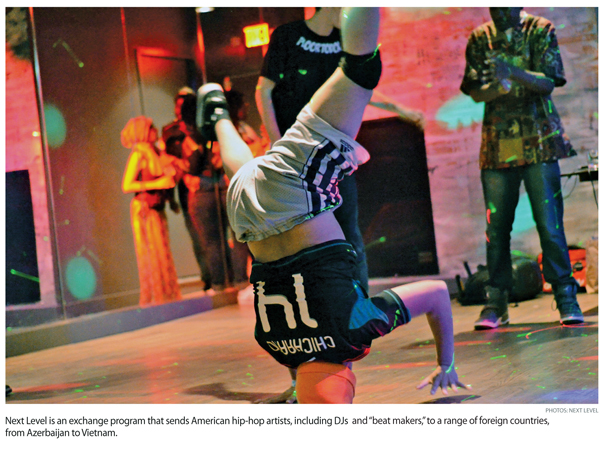 Since the writing of the Declaration of Independence, when the Founding Fathers wanted their newly created democracy to set an example to the world, projecting American values and ideals abroad has been a core component of U.S. policy.

Over the years, this form of public diplomacy has included broadcasts by the Voice of America, educational exchanges such as the Fulbright Program and a State Department initiative that sent American jazz greats such as Dizzy Gillespie to tour the world during the Cold War in an effort to promote Western-style democracy over Soviet-era communism.

Today, the State Department continues to get creative in its efforts to win hearts and minds overseas, but with a 21st-century twist. Instead of sending jazz trumpeters abroad, it’s dispatching hip-hop artists to places ranging from Azerbaijan to Vietnam, where American rap and urban beats aren’t usually on the musical menu.

This summer, the Meridian International Center partnered with the State Department’s Bureau of Educational and Cultural Affairs and the University of North Carolina at Chapel Hill (UNC) to produce Next Level, an exchange program showcasing hip-hop music and dance to international audiences in underserved communities.

“Hip-hop was definitely a way to connect to people in different communities for me as a child,” said Next Level Associate Director Junious Brickhouse. “I think today, it still has that same power, and we’ve seen it with Next Level.”

Up to 20 American “beat makers,” DJs, B-Boy and B-Girl dancers, MCs and graffiti artists are teamed together and trained to conduct overseas workshops that focus on four hip-hop forms: beat making, dancing, DJing and rapping, along with some beat-boxing and graffiti art as well. The program also hosts six artists from abroad to come to the United States for a professional development program.

Since 2013, 85 artists have participated in Next Level, which aims to foster mutual understanding, conflict resolution skills and entrepreneurship. Past programs have taken hip-hop artists to Algeria, Bangladesh, Bosnia and Herzegovina, Colombia, Croatia, India and elsewhere. This year’s program will visit Azerbaijan, Egypt, Morocco, Myanmar and Vietnam.

Next Level works closely with U.S. embassies and consulates in the target countries to develop specialized two-week residencies that reach underprivileged youth. The artists collaborate with local organizations and musicians to design workshops, classes, performances and other activities, culminating in a final public performance where professional-grade musical equipment is donated to the in-country partners so they can continue their studies.

“In hip-hop, when artists say that they want to ‘take it to the next level,’ they are saying that they want to improve themselves, to surpass their current abilities,” said Next Level Director Mark Katz, professor and chair of music at UNC’s College of Arts and Sciences. “Next Level’s artists will teach young people to develop skills and express themselves in ways they wouldn’t have thought possible. The name has another meaning, too. We want to use this as a way to model peaceful and productive collaboration, to transcend conflict in creative ways.”

Katz applied for the grant from the State Department in 2013 because what the department had posted closely mirrored his passion and work using hip-hop music to reach minorities and the poor.

Participating artists hail from a wide variety of backgrounds and experience. For example, graffiti artist Eric Angelini — part of the Azerbaijan program — started creating street art in Los Angeles at the age of 11. He has completed work for clients such as Guess, Nike and HBO, and his art has appeared in music videos for Snoop Dogg, Christina Aguilera and 50 Cent, among others. Team Vietnam includes Serouj “Midus” Aprahamian, who has been in the breakdancing world since 1997 and is now pursuing a Ph.D. in dance studies at York University in Canada. Team Bosnia included Mahogany Jones, who was named the only four-time undefeated champion of BET’s “Freestyle Fridays” in 2001. She was also selected by the State Department to serve as a hip-hop ambassador to five African nations.

Next Level’s mission also builds on the legacy of the State Department jazz ambassadors — among them Louis Armstrong and Duke Ellington — who were sent to developing countries around the world starting in 1956 to offer an American contrast to communism. 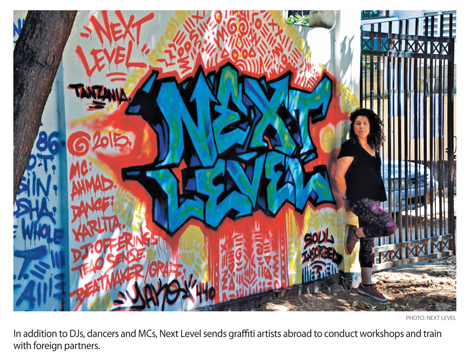 Likewise, the countries chosen by Next Level since 2013 include places where major political and social shifts have occurred. From Colombia and its half-century struggle for peace against insurgent rebels to Tunisia’s arduous Arab Spring journey, the program’s destinations serve as fertile ground for Next Level’s parallel focus on conflict resolution and problem solving.

In many ways, hip-hop is an ideal medium for these cross-cultural exchanges as it has often served as a populist voice, rooted in political movements. The activist subgenre of hip-hop became popular in the 1980s, when musicians began using rap to shed light on social issues such as racism and poverty, a movement that inspired other young musicians around the world from the inner cities of France to towns in Spain. At the beginning of the Jasmine Revolution protests that shook Tunisia in 2010, rapper “El Général” was arrested for a song criticizing authoritarian rule under President Zine El Abidine Ben Ali, a tune that became a prominent symbol of the Arab Spring.

At the U.S. Embassy in France, then-Ambassador Charles Rivkin also focused on music, and specifically hip-hop, as part of his “Minority Engagement Strategy,” which was originally reported on by WikiLeaks. The outreach, targeted at France’s mostly Muslim minority, included a musical exchange trip to Harlem for French hip-hop artists and hosting local musicians at embassy receptions — part of an effort to connect with France’s poorer, multiethnic immigrant communities.

Katz said Next Level is all about people-to-people diplomacy and fostering connections that last long after the program is over. In a blog interview in 2014, he said it’s “about allowing people of different nationalities, cultures, races, ethnicities, religions, and classes … to find a space in which they can learn from each other and develop mutual respect.”