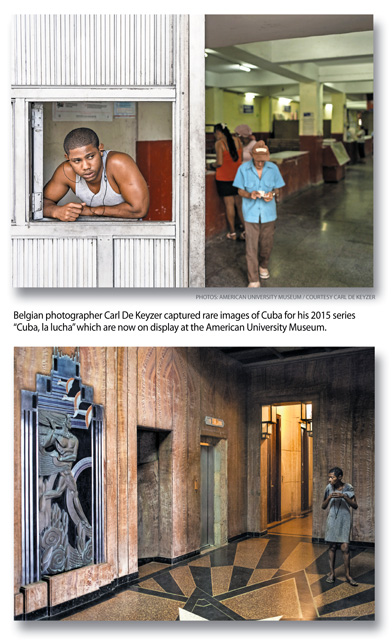 Belgian artist Carl De Keyzer has visited every province in North Korea through some of the most extensive access ever granted to a foreign photographer. And if anyone were to find a way to peek inside the Hermit Kingdom, it makes sense that it would be him.

He photographed the Soviet Union in 1989 immediately before the fall of the Berlin Wall. He did a project on Siberian prison camps and was arrested 54 times while working in the Congo. He is drawn to rigid and unique systems. North Korea and Cuba were always on his bucket list.

Now, a striking selection of images from his travels to the two countries are on display in an exhibit at the American University Museum titled “States of Mind: Photographs of Cuba and North Korea by Carl De Keyzer.”

The exhibit is all the more compelling given recent events, with President Trump trying to dismantle his predecessor’s diplomatic rapprochement with Cuba, as well as North Korea’s missile provocations that have ratcheted up Pyongyang’s ability to launch a nuclear strike on the U.S. in the near future.

For decades, the resilient communist governments in both nations have vexed U.S. policymakers and intrigued average Americans. De Keyzer, who belongs to the globally renowned collective Magnum Photos, doesn’t delve into the complex political dilemmas each nation poses, but rather lets his photographs of everyday life in North Korea and Cuba speak for themselves.

In De Keyzer’s signature style, the images are piercing vignettes of daily life. The activity isn’t dramatic; the power is in the humanity they capture in the contrasting settings.

When examining the North Korea images, it’s unclear how staged the scenes are. A group of men stand, fists raised in support of a figure hidden from view. A young girl plays an accordion. Children read textbooks in class. Everything looks polished, from the tiled walls of an indoor swimming pool to a group of youths’ crisp white uniforms.

What we see feels just as telling as what we don’t see — especially in contrast to the Cuba images, which often pair tattered architecture with a sense of idleness. Compared to the sterile North Korea backdrop, everything feels warm and weathered, including the Cuban people, who seem unsure of how to move forward when they have so little.

“This is not the whole truth about the DPRK or Cuba,” De Keyzer told us, referring to the official Democratic People’s Republic of Korea moniker. “This is just a version. I’m not … someone who tries to be as objective or politically correct as possible. If you look at my other books, often it’s closer to fiction than reality.”

De Keyzer finagled his way into photographing one of the most restrictive countries in the world with a strong resume and a bit of luck. At first, the Koryo Group, a British-owned, Beijing-based travel company, turned down his request to visit North Korea as a photographer. But then it looked at his acclaimed work in many of the most rigidly dictatorial countries in the world and recognized that he knew the drill, De Keyzer explained.

“They said, ‘Well, we have an opportunity. We have this very old website from the ’90s and we are really in need of new pictures, so would you be interested in shooting these new website pictures for us and, you know, travel the whole country?’” he recalled. “Well, yeah. I only had to think about it for three seconds, and I said ‘yes.’”

Thus commenced his four trips for a total of 60 days in North Korea. He traveled in a minivan with a driver and two guides who monitored him day and night. 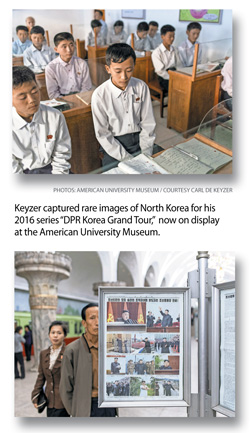 After the first three trips, De Keyzer presented the Koryo Group with the photos he was interested in publishing, allowing them to censor any they disapproved of. To his surprise, they accepted all but three.

Cuba was easier to access and made for dramatically different subject matter than the replica of the Soviet Union he found in Asia, De Keyzer said.

He began photographing the island eight months prior to North Korea, traveling the country with a university student as a guide and staying in locals’ homes. The resulting book, titled “Cuba La Lucha,” was released in July 2016.

“Almost all the photographers go there because it’s such an attractive country visually,” De Keyzer told The Diplomat. “All these cars and these palm trees … and all these colors. These are things I wanted to avoid at all costs. I tried to do something different.”

His forays into the lesser-known sides of Cuba and the barely-known country of North Korea leave us with a snapshot of hidden worlds.

“He’s able to get up close and personal, and you just get the feeling that he is not exploiting the situation, that he’s genuinely trying to understand and to reveal,” American University Museum Director Jack Rasmussen said. “So it’s interesting — on the one hand, he’s a documentary photographer taking on topical issues, but on the other hand, he’s an artist who’s just trying to see the world and understand and show others.”

A lack of captions, however, leaves viewers guessing about the scenes and the circumstances in which they were photographed. Behind every photograph is a story that we will never truly know.

For example, a young man in a tank top casually leans on an open window in Cuba. He appears to be in a public building where people get their government rations. Is he working? Waiting for someone or something? What’s playing in his earbuds?

The constant contrast of people and setting is seen throughout De Keyzer’s Cuba series. We see two older men practice boxing in room littered with old-fashioned TVs, cluttered desks and fading images of Marxist revolutionary Che Guevara on the wall. Decked-out friends and family gather around a young bride and groom sitting behind an administrative desk, perhaps getting married or waiting to receive their wedding license. A shabbily dressed man looks lost standing in a gleaming art deco-inspired lobby. A young man plays a piano on a makeshift seat in a dilapidated building. Classic American cars wind their way through Havana’s streets, teeming with life, elegant colonial architecture and a sense of decay.

The context behind the North Korea photos is even more elusive and enigmatic. A group of people stand in line for food. For some reason they are all wearing 3D glasses. Uniform rows of children perform some sort of school-sponsored dance or ritual. Anonymous workers go about their day in a subway station as they pass a billboard depicting the country’s dictator, Kim Jong-un, in various triumphant propaganda-like poses. Where are they going? Are they happy with their station in life? With their leader, who is wreaking havoc around the world? Do they even know what’s going on outside the country?

De Keyzer offers more questions than answers, just like the politicians struggling to deal with both nations. But he also offers us a rare window into the humanity behind the headlines, and that in and of itself is worth a look.

States of Mind: Photographs of Cuba and North Korea by Carl De Keyzer

Teri West is an editorial intern for The Washington Diplomat.