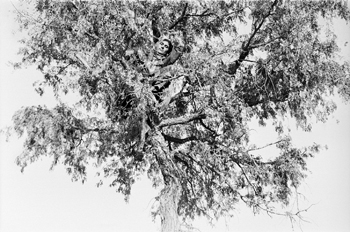 The starkly beautiful black-and-white prints featured in “Notes from the Desert: Photographs by Gauri Gill” seek to challenge viewers into rethinking ideas about traditional documentary photography, India and how women appear in both contexts.

Since the late 1990s, Gauri Gill has been photographing marginalized communities in western Rajasthan, India, as seen in works such as “Izmat” from the “Notes from the Desert” series.

This exhibition, the latest in a series at the Arthur M. Sackler Gallery focused on contemporary photography from Asia, comes from Gill’s extensive archive of photographs from her time visiting and working in rural communities in western Rajasthan.

“This is an extensive archive that Gauri revisits repeatedly,” Carol Huh, the Freer|Sackler’s associate curator of contemporary Asian art, told The Washington Diplomat. “She lets the material sit. She takes her time with the images.”

So should visitors. “Notes from the Desert,” on display through February, offers a window into an often-unseen world. Anchored with thoughtful anecdotes from Gill, the exhibition highlights images from her extensive time capturing marginalized communities in the rural desert areas she has regularly visited since the late 1990s.

The most striking part of the show comes from a series of 52 photographs and letters — “one for each week of the year, essentially,” Huh notes — that allows viewers to drop in and out at any point in the story of one of the key figures in Gill’s work, a woman named Izmat. This collection, which highlights the lives of Izmat and her two daughters, is not meant to be viewed chronologically, but is instead presented as a circular narrative.

As Gill recalls in the exhibition, she was lost in Rajasthan when she first met Izmat, who was with a group of women “fully covered in large dark ajrak shawls standing around the corpse of a little girl.”

“They looked intimidating, but when I ventured to ask for directions to the school, I was interrupted by one of the women, Izmat, who grasped me by the hands and told me what was wrong with her life. With great conviction she impressed upon me that on my return to Delhi, I should tell people of the troubles of people in Barmer,” Gill wrote. “Izmat asked me for my address and, in subsequent letters that she dictated to literate acquaintances and posted to me, urged me to return. I did.”

Huh said the images associated with Izmat present visitors with the chance to explore the “intimate glimpses of a life.”

“Something that Gauri emphasizes repeatedly is that together the series is really not so much a documentary of a particular individual or family’s life, but more her experience of the kind of love that was felt in this family relationship. She says it’s a story of love, fundamentally,” Huh said.

That’s not the only broad story being told in this show through such personal images. Gill’s photographs challenge the history of photography and women in India, Huh noted, but “it doesn’t hit you over the head.”

Instead of the notion of “photographing types” or simply “shooting conditions of life” in the region, Gill puts her emphasis on the subject and her relationship with that person. The exhibition highlights Gill’s familiarity with the people she shoots, and that “speaks in considerable contrast to the way historical images have typically portrayed marginalized communities in India, and especially women,” Huh said.

“This is intentional on her part because she is sensitive to the notion of kind of the saturated colors of India in photography,” Huh said. “She wants to not focus on that, and really try to focus in on the relationships, on the subjects, and on the individuals and how they relate to their environment, and not be distracted by the color that is so typically associated with the country.”

Although the photographer favors black and white, the exhibition revels in the medium’s variety. “Just in this one relatively small exhibition, we have a range of portraiture and approaches to portraiture and different technical formats,” Huh said, noting that Gill shoots in film.

The opening series of portraits from Balika Mela, a village fair for girls, are done with a larger-format camera and are posed scenarios in a studio environment, for instance. Gill invited young women into her makeshift photo tent to portray themselves or to invent new personas for the camera. According to the Sackler, each life-size image portrays “the girls’ fortitude and sense of freedom through their purposeful poses.”

With portraits of Izmat as well as Izmat’s daughter Jannat, who died in 2007 at the age of 23, the photographer has left the studio and is out in the landscape.

The “Izmat” portrait is a remarkable vision and the show’s clear standout.

“This is a portrait of a woman, and she’s honoring her strengths as a woman and as a single mother,” Huh said. “She is not on the ground playing, for instance, she is up in a tree, in black and white. She emerges from the foliage and she looks down at the viewer — she’s challenging you to see her. It’s not an easily captured subject.”

And with her shots of daily life for Izmat and her daughters, Gill uses a small 35mm camera to offer glimpses of her subjects.

“You start to realize that her priority is not to capture the shot — her priority is to develop her relationships, to understand her subjects, and then along the way she’ll take photographs unobtrusively,” Huh said.

Notes from the Desert: Photographs by Gauri Gill