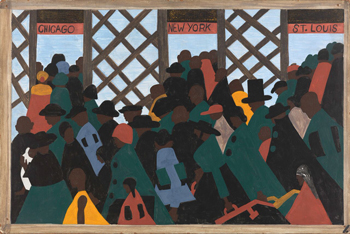 The timely topic of African American history and identity, along with the larger issue of migration, overlap in two compelling, contemplative exhibitions at the Phillips Collection: “People on the Move: Beauty and Struggle in Jacob Lawrence’s Migration Series” and Whitfield Lovell’s “Kin Series and Related Works.”

Jacob Lawrence used simple text to accompany his vivid panels for “The Migration Series,” with descriptions such as “During World War I there was a great migration north by southern African Americans.”

Lawrence’s “Migration Series” is a justifiably famous and epic narrative of panels that document the historic movement of millions of African Americans from the rural South to the urban North that began during World War I. The show unites 30 panels owned by the Phillips with the other 30 on loan from the Museum of Modern Art. Together, the complete series is a kinetic journey that conveys pure, powerful emotional effect — akin to the paintings of Winslow Homer, stripped of details.

Lovell’s “Kin Series” comes at America’s collective past from a different perspective but with echoes of Lawrence’s legacy. Lovell manipulates found objects and drawn figures to explore questions of identity and memory, portraying African Americans from the time of Emancipation to the Civil Rights era and indirectly intersecting with Lawrence’s narrative.

Lovell’s signature style of connecting drawings of faces to everyday objects — shoes, suitcases, brooches and clocks — lends an evocative, sometimes heartbreaking, effect to his work. It’s as if he lifted some of the barebones figures from Lawrence’s panels and filled out the details of their faces and lives.

By the 1930s, Lawrence had developed a distinct style for assaying narrative series that were notable for their simplicity and abstraction. He described style as “dynamic cubism,” though he was also heavily influenced by the vivid shapes and colors of Harlem. He had already attracted notice for a series of pictures depicting the lives of 19th-century abolitionists Harriet Tubman and Frederick Douglass when he received a grant from the Julius Rosenwald Fund in 1940 to create a 60-panel work called “The Migration of the Negro,” otherwise known simply as “The Migration Series.” The series was exhibited at Edith Halpert’s Downtown Gallery to great acclaim; Lawrence was only 23 years old at the time. In the ensuing years, the series took on iconic aspects as Lawrence continued to work until his death in 2000.

Lawrence’s masterpiece is both stark and highly charged, with a palpable energy that ebbs and flows like a river — or, in this case, the mass movement of people. The accompanying writing describes this exodus of humanity in matter-of-fact fashion, beginning with the first panel — “During World War I, there was a great migration north by southern African Americans” — which is paired with scenes of people milling around and forming lines at railroad stations with the fabled names of Chicago, New York and St. Louis as destinations.

The text is simple and sparse — “Food has doubled in price because of the war” and “Their children were forced to work in the fields. They could not go to school” — offering a perfect complement to the dramatic imagery that hints at a hugely consequential era in U.S. history. We see northern cities swelling with African Americans; long-time residents who resented the newcomers; people carrying cotton baskets in the South; crowded working conditions in the North that led to diseases like tuberculosis; children standing almost defiantly in front of blackboards in schools; and African Americans voting in northern cities.

The narrative that chronicles this rocky journey is as jagged and jarring as the deeply colored images: “There were lynchings”; “There had always been discrimination”; “They were very poor”; “They found discrimination in the North. It was a different kind”; “The migrants arrived in great numbers.”

Together, Lawrence uses deceptively simple methods to tell a complex saga with universal resonance that stretches across time and borders.

“In panel 60 of ‘The Migration Series,’ Lawrence leaves us with the message, ‘And the migrants kept coming,’” said curator Elsa Smithgall. “During a time when record numbers of migrants are uprooting themselves in search of a better life, Lawrence’s timeless tale and its universal themes of struggle continue to strike a chord not only in our American experience, but also in the international experience of migration around the world.”

Lovell, who was born in the Bronx in 1959, over 40 years after Lawrence, doesn’t focus on the Great Migration per se, though his people are also specific to a certain time, place and race. But his artistic and storytelling techniques are very different.

According to the Phillips, “Through the potency of their juxtapositions and the symbolism of his visual language, Lovell’s ‘Kin’ allow the viewer to contemplate the ‘markings that the past has made — and continues to make — on who we are.’”

In “Strange Fruit,” for example, we see a male figure with a red bouquet of silk flowers, echoing something from eponymous song (recorded by Billie Holliday, among others) that meditates on racism and lynching. Another odd juxtaposition is a female figure with boxing gloves dangling around her neck.

Some of the works are on wood with sepia overtones that evoke a distant time, such as “North,” which shows a man in a large brimmed hat with a worn, old-fashioned suitcase below his profile.

Like “The Migration Series,” there is a literary component to Lovell’s art, which references poets such as William Wordsworth and Maya Angelou.

It’s a haunting amalgam that reflects on the past and transports viewers in the vein of Lawrence’s seminal “Migration Series.” On the one hand, time stands still in both artists’ snapshots of American history; on the other, it continually moves forward. But as current events such as the recent U.S. election and European migration crisis have shown us, the past is always with us, in one guise or another.