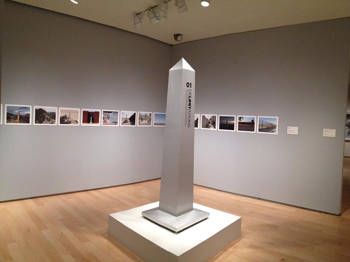 “Delimitations” is a 2,400-mile-long, site-specific installation by artists Marco Ramírez Erre and David Taylor that outlines the border between the U.S. and Mexico in 1821, when a newly independent Mexico controlled most of the American Southwest, along with parts of modern-day Texas and California.

Borders: They can seem like impenetrable walls for those trying to escape or break through them — physical obstacles to a new life. Yet the borders that separate countries are often illusory and transitory, manmade barriers that evolve over time. On the one hand, they maintain law and order; on the other they often spark conflict and resentment.

As the topic of borders takes a dark turn in this U.S. presidential race, the Embassy of Mexico hopes to shine a more positive light on the shifting boundaries between the U.S. and Mexico in “Delimitations,” which documents a 2,400-mile-long, site-specific installation by artists Marco Ramírez Erre and David Taylor. The installation outlines the border between the U.S. and Mexico in 1821, when a newly independent Mexico controlled most of the American Southwest, along with parts of modern-day Texas and California.

The boundary was never surveyed and the only record of its brief existence can be found in antique maps and documents. By 1948, after nearly two years of war, Mexico would lose Texas and large chunks of territory to the rapidly expanding American nation.

According to the embassy, the exhibit “questions the immutability and permanence of borders at a time when territorial claims are disputed throughout the world.” But the goal is not to contest the border, but rather to highlight the fact that the two neighbors “have a shared history and common interests.”

“We wanted to showcase something about the border and the U.S.-Mexico relationship … and the relations between their border cities,” said Alberto Fierro, executive director of the Mexican Cultural Institute. “[The exhibit] reflects how borders are never forever; it’s interesting to show at this time,” he added.

The artists recreated this historic boundary with a series of 47 obelisks that mimicked markers installed along the present-day border. In July 2014, Erre and Taylor finished their project across a landscape that stretches from the Pacific Coast near Brookings, Oregon, all the way down to Port Arthur, Texas. The project crisscrosses much of the American West and Midwest, encompassing some 2.1 million square kilometers of territory ceded to the U.S. under the Treaty of Guadalupe Hidalgo following the Mexican-American War in the 1840s.

“I’m a historian, so I always think that history is very important to understand the present and be prepared for the future,” Fierro said. “So I think that yes, this exhibit allows American people to know something that is not told much here in the U.S. — the Mexican American War.”

Fierro hopes those who visit reflect on the question of “what if history had been different?” 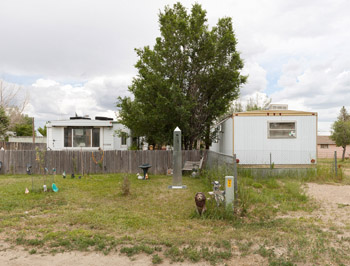 The fact that a Mexican artist and American artist collaborated on the installation also symbolizes the inextricable ties between the two nations.

“It’s a joint venture between American and Mexican artists,” Fierro said. “They thought of doing this journey, rented a van and just did research and created art, photography and this installation jointly…. I think it’s fun to see how artists have fun researching, intervening and creating.”

Fierro encourages those who see the exhibit to think about states like California, which are melting pots of enduring Spanish and Latin influences. “It does tell you how connected we’ve been always. We’ve been neighbors and will continue to be, with a lot of collaboration and mutual interests,” he said.

“Delimitations” is itself a collaboration with the German Goethe-Institut as part of its exhibit “2,000 Miles: Divided Land, Common Humanity,” in which two German artists, Daniel Schwarz and Stefan Falke, examine the geography and cultural and social commonalities on the two sides of the U.S.-Mexican border.

The goal of both shows is to spotlight and, in a sense, tear down the physical and metaphysical barriers that people have built throughout history — as well as the walls being erected during this heated election season.

Kate Oczypok (@OczyKate) is a contributing writer for The Washington Diplomat. Anna Gawel is the managing editor.