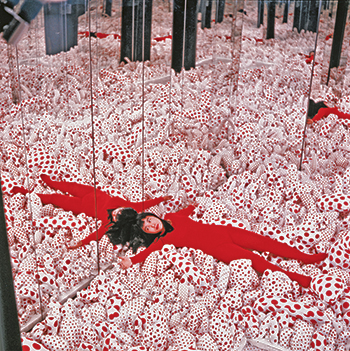 In her Infinity Mirror Rooms, Yayoi Kusama immerses visitors in an endless universe of blinking lights or a psychedelic field of polka-dotted pumpkins, creating alternate worlds that must be experienced in the fleeting moment.

The highly anticipated exhibition “Yayoi Kusama: Infinity Mirrors” at the Hirshhorn Museum offers six of the Japanese artist’s extremely popular mirrored rooms together for the first time, along with other sculptures, paintings and work on paper spanning her 65-year career. With its kaleidoscopic colors and mesmerizing patterns, the show has already broken records, attracting over 14,000 visitors during its first week alone.

Known for polka dots and pumpkins, Kusama’s life has ping-ponged across continents and in and out of the public eye. Now 87 years old, she gained fame in influential New York art circles in the 1960s with art “happenings” and Vietnam War protests before slipping into obscurity after returning home to Japan in 1973. Suicidal thoughts and a mental breakdown led her to voluntarily live in a psychiatric hospital in Tokyo, where she still resides more than 40 years later, but her battle with mental illness is glossed over in the exhibition. Her career has surged back in recent years, and this exhibition is the first in the Hirshhorn’s history where free timed passes are being distributed, which crashed the museum’s website from the intense demand.

Kusama has spoken of hallucinations and obsessions dating back to an unhappy childhood under the reign of a philandering father and unforgiving mother. Some of her early paintings featured repetitive strokes of paint that evolved into polka dots in an effort to quiet her mind and obliterate the self, a common theme in her work. Kusama has said polka dots are a symbol of peace and the infinite cosmos.

The Infinity Mirror Rooms began in the 1960s when Kusama was struggling financially in New York while also exhibiting her work with Andy Warhol, Claes Oldenburg and other pop art luminaries. She had an intense fear of sex from her strict upbringing that she rebelled against by staging “happenings” and nude body festivals at Washington Square Park, Wall Street and other locales that sometimes morphed into protests against the Vietnam War.

In “Infinity Mirror Room-Phalli’s Field,” the first in the Hirshhorn exhibition, the floor is covered with hundreds of sewn and stuffed white phallus shapes adorned with red polka dots, rising in a field of protuberances that extend infinitely in every direction while the viewer towers above them in multiple reflections. The hallucinatory effect renders the stuffed phalluses small and humorous as they diminish into the imagined distance, where they lose their distinct form, merging together like a field of poppies. 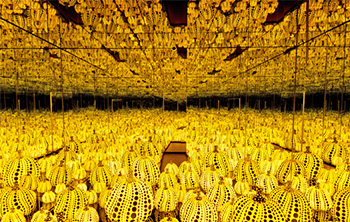 The Hirshhorn is hosting a survey of Japanese artist Yayoi Kusama’s mesmerizing works, including “All the Eternal Love I Have for the Pumpkins.”

One of the most captivating rooms is “The Souls of Millions of Light Years Away,” which also is the darkest, as your own reflections fade into a vast expanse of hundreds of hanging LED lights that shift in time and rhythm, creating a vast universe. While it may sound disorienting, the experience instills a true sense of wonder. I felt immersed in that imaginary world and forgot for a moment that I was in an art museum until I heard a distracting knock on the door. Because of the anticipated crowds, visitors will only get 20 or 30 seconds in each room before they are ushered out. The immediate instinct for most people will be to scramble for their phones to fire off as many pictures as possible to post on Facebook or Instagram. But then the moment will be gone, vanished into the digital netherworld, so rest that itchy trigger finger for a few seconds and experience the present moment.

In “Aftermath of Obliteration of Eternity,” miniature flickering lights resembling golden lanterns fill the darkened expanse with their floating luminescent forms, creating a galaxy of stars reminiscent of toro nagashi, a Japanese tradition where candlelit paper lanterns float down a river in a sign of respect for ancestors and as a guide to bring them home. Other Mirror Rooms feature an endless field of lighted pumpkins, a flashing grid of LED lights or inflated pink polka-dotted balls that are fun but veer toward pure whimsy without much substance. But what’s wrong with whimsy? In a frenetic world fueled by hate and anger, we need all the whimsy we can get.

In the final “Obliteration Room,” visitors can stick colored dots all over a room representing the interior of a house with a piano, dining room table and bookshelves. There’s something both satisfying and transgressive about touching objects in an art museum and plastering stickers onto them, but the effect will be more interesting later in the exhibition’s run when the accumulation of dots truly overwhelms the pristine white backdrop in a dizzying array of color. 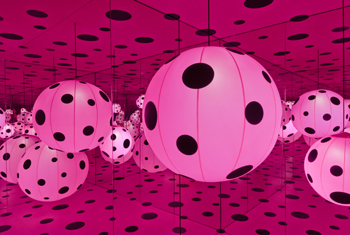 While this is a feast for the senses, visitors won’t get a true sense of Kusama’s life because the exhibition largely ignores her battles with mental illness. The wall text fails to mention that she has lived in a psychiatric hospital for four decades. She wrote a poem about suicide and swallowing antidepressants, and much of her work has been a reaction or balm for her inner turmoil — an attempt to transcend the horrors of the present and step into the divine. The exhibition, organized by Hirshhorn associate curator Mika Yoshitake, ignores most of the professional and personal challenges that Kusama faced and presents a steady march of artwork through the decades that is divorced from personal history or context. Kusama’s identity as a human being gets lost behind the polka dots.

There also is a danger in letting an artist’s life story subsume the art, but there’s a common misperception that mental illness somehow produces transcendent work from the ether, as if the artist’s skill and dedication had nothing to do with it. Mental illness may inform the work but it doesn’t define it, although ignoring its effects and its relationship to Kusama’s artwork keeps mental illness locked in the shadows, where shame and suffering fight for control.

Kusama doesn’t travel any more for health reasons so she won’t see her own traveling exhibition at the Hirshhorn or the five remaining stops at museums in Seattle, Los Angeles, Toronto, Cleveland and Atlanta. Wearing her trademark bright-red wig and a polka-dotted dress, Kusama welcomes visitors to the exhibition in a video where she speaks about her work and her hopes for us all.

“This effect of continual repetition calls out to the human senses, and in return, deep inside of our hearts, we yearn for true amazement,” she said. “Far beyond the reaches of the universe, infinity is trying to communicate with us.”