Home The Washington Diplomat February 2016 Omnibus Grab Bag Has Something For Everyone, Including Diplomats 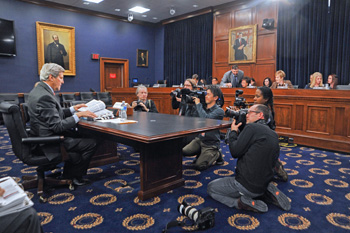 Also See: Highlights of the State and Foreign Operations Budget and What’s in the Rest of the Budget?

Washington’s budget battles have grown increasingly dramatic in recent years, with a seemingly inverse relationship between the intensity of negotiations and the length of funding cycles. The tussle for fiscal 2016, however, was different, with eleventh-hour verbal jousting taking place behind close doors, and all sorts of policy measures buried deep in the 2,000-plus pages of law that will guide federal spending for the next fiscal year.

Secretary of State John Kerry is surrounded by photographers in the Rayburn House Office Building shortly before his testimony a year ago in front of the House Appropriations Committee on the State Department’s fiscal 2016 budget request.

After years of partisan wrangling that led to a series of stopgap spending bills and temporary tax fixes, the $1.1 trillion omnibus spending bill passed both chambers with surprisingly little rancor. Newly elected House Speaker Paul Ryan (R-Wis.) was able to quell a conservative uprising against the bill, which ends a period of belt-tightening by boosting both defense and non-defense discretionary spending. The parties found consensus and compromise in their bid to avert a government shutdown: Democrats won tax breaks for renewable energy and resisted Republican efforts to cut Planned Parenthood funding and restrict Syrian refugees, while Republicans delayed several Obamacare-related taxes and ended a 40-year ban on crude oil exports.

The legislation, which includes nearly $700 billion in tax breaks, provides federal agencies and private businesses with a measure of fiscal stability and marked a return to the normal appropriations process after years of dysfunction.

“There are a couple of huge pluses” for supporters of foreign aid in the omnibus package, said George Ingram, a senior fellow in the Global Economy and Development program at the Brookings Institution. One is the fact that appropriators gave agencies a relatively healthy dose of foreign aid funding to work with — $52.68 billion in “State and Foreign Operations.” That is shy of Obama’s request but considerably more than draft legislation had earmarked, according to Beth Schwanke and Erin Collinson of the Center for Global Development (CGD). In total, the bill allocates $3.4 billion more in international spending than the previous fiscal year (excluding emergency funds for Ebola).

For Ingram, a former senior staffer on the House Foreign Affairs Committee, another reason to rejoice is that, after years of delay, Congress finally approved quota reforms to the International Monetary Fund, giving emerging economies like China and India greater voting power in the organization.

A combination of a recalcitrant Congress and an administration that hadn’t invested enough political capital in the issue explains why it took five years to get the IMF quota reform approved, said Ingram, a former official at USAID.

The CGD’s Clay Lowery and Scott Morris welcomed Congress’s passage of the quota reform as long overdue and hoped the move would restore what they said was lost U.S. credibility at the IMF. “The United States played a leadership role in crafting the 2010 package, only to see that leadership eroded each year Congress failed to act,” they wrote in a blog post.

In an interview with The Diplomat, Ingram highlighted a perhaps overlooked bottom line of this administration: Despite the budget turmoil of the last several years, foreign assistance funding has done relatively well under Obama.

Over the last four fiscal years, for example, funding for USAID and the Millennium Challenge Corporation — two key pillars of foreign aid policy — has been relatively steady. Over that period, USAID’s base budget has averaged $1.42 billion annually, while MCC’s has averaged $887 million.

In terms of proving return on investment to lawmakers, Ingram said the MCC has metrics for justifying investments built into its mandate, while USAID is playing catch-up in that category.

Schwanke and Collinson, the CGD analysts, breathed a sigh of relief at the budget deal, but lamented that more investment could go a long way. “The overall [international financial institutions] numbers are nowhere near as terrifying as the House and Senate draft … bills, though they’re still grim given how much development bang for our buck we get through the” multilateral development banks, they wrote in a blog post. 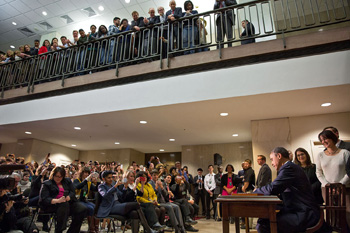 President Obama signs the 2014 Appropriations Act in the New Executive Office Building of the White House on Jan. 17, 2014.

Other areas that received a funding bump from 2015 figures include the Peace Corps, maternal and child health, and the President’s Emergency Plan for AIDS Relief (PEPFAR).

Yet development professionals celebrating the foreign aid budget should read the fine print. A significant portion of the foreign aid money — $14.9 billion — comes through the Overseas Contingency Operations (OCO) fund, an end-around to budget caps. Ingram worries that the OCO trick may not be available to lawmakers in future years, meaning a lower base budget when it comes to foreign aid.

While Schwanke and Collinson welcomed the increase in budgeting for USAID’s operating expenses from fiscal 2015, they hinted at the tall administrative challenges facing the agency.

“We were pleased to see $1.283 billion … for USAID’s operating expenses, short of the president’s request, but at least higher than FY15,” wrote Schwanke and Collinson. “Less than ideal is that no funds are provided for new positions. As we raised in July, it seems shortsighted to limit new hiring if USAID continues to make good on its efforts to become more than a contracting pass through.”

USAID got a boost in late November when, after months of delay, the Senate finally confirmed Gayle Smith as the agency’s head. Ingram hopes that Smith, a seasoned development official, can use the administration’s final year in office to drive home reforms such as more closely intertwining policy and budgeting.

When asked if Smith had the budget she needs to usher in change at USAID, Ingram said, “She has adequate resources. Does she have the resources she really needs to do her job? No, she doesn’t.”

Ingram echoed Schwanke and Collinson’s belief that USAID needs more funding for staffing. The former USAID official also worried that, thwarted by a Congress often lukewarm on the idea of climate change, the agency won’t get the funding it needs to meet the ambitious climate commitments the Obama administration made in Paris in December.

For seemingly every generation of American diplomats, a crisis drives home the dangers of the job. For years, the 1979 hostage crisis at the U.S. Embassy in Tehran was that emblem of insecurity. For today’s diplomats, the defining moment is the 2012 attack on the U.S. consulate in Benghazi, Libya, that killed the U.S. ambassador to that country and three other Americans. 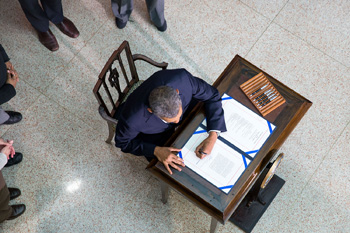 President Barack Obama signs the 2014 Appropriations Act in the New Executive Office Building of the White House on Jan. 17, 2014.

“The problem for the State Department comes when there is value in maintaining a diplomatic presence even as the security situation in the host country is deteriorating,” P.J. Crowley, a former assistant secretary of state for public affairs, told The Diplomat. “That’s what happened in Libya. Our diplomats were serving a vital purpose, but the host nation could not guarantee basic security.”

The 2016 budget plan includes $3.4 billion for embassy security, including funds to continue implementing recommendations of the Benghazi Accountability Review Board.

More than three years after the Benghazi attack, Congress passed a measure in the omnibus that grants the State Department authority to conduct “best-value” contracting for security at embassies across the globe. The State Department had hitherto been incentivized to hire the cheapest security firms for embassy security, with exceptions for “high-risk” embassies, according to Rep. Lois Frankel (D-Fla.), who sponsored the new provision along with Rep. Randy Weber (R-Texas). Now, the best-value provision will be extended to all embassies.

The new contracting provision is one of the few bipartisan things to come out of the Benghazi siege, which has placed former Secretary of State Hillary Clinton in Republicans’ crosshairs.

Frankel told The Diplomat that one of her first hearings as a congresswoman, in January 2013, saw Clinton testify that the contracting statute needed to change.

Since Clinton’s testimony, lawmakers have taken incremental steps to try to make State Department acquisition officials less beholden to price when choosing diplomatic security. A provision allowing “best-value” contracting at high-risk embassies made it into the fiscal 2014 and 2015 appropriation bills, and the efforts culminated in this year’s omnibus extending the measure to all embassies.

The provision made sense “given the circumstances of how dangerous the world was becoming,” Frankel said. “During these troubling times, it’s more important than ever that Americans representing us abroad are well-protected,” she said.

“This is an example of once an issue is brought to the surface, we can move quickly,” the Florida Democrat added. “Both sides of the aisle believe we have a moral obligation as well as a national security imperative to safeguard our diplomats.”

Highlights of the State and Foreign Operations Budget

Educational and Cultural Exchange Programs: $590.9 million, including $236 for the Fulbright Program

Central America: $750 million (to respond to the surge of unaccompanied children crossing the border)

What’s in the Rest of the Budget? Here’s a Sampling:

Department of Defense: $572.8 billion (including $58.6 billion for Overseas Contingency Operations); includes $715 million for the Iraq Train and Equip Fund, $1.1 billion to assist friendly countries in defending against violent extremism, $789 million for the European Reassurance Initiative and $250 million in lethal and nonlethal aid to Ukraine

Department of Homeland Security: $40.9 billion (in addition to $6.7 billion in disaster aid); includes $11 billion for Customs and Border Protection and $5.8 billion for Immigration and Customs Enforcement

Departments of Labor, Health and Human Services, and Education: $162.1 billion