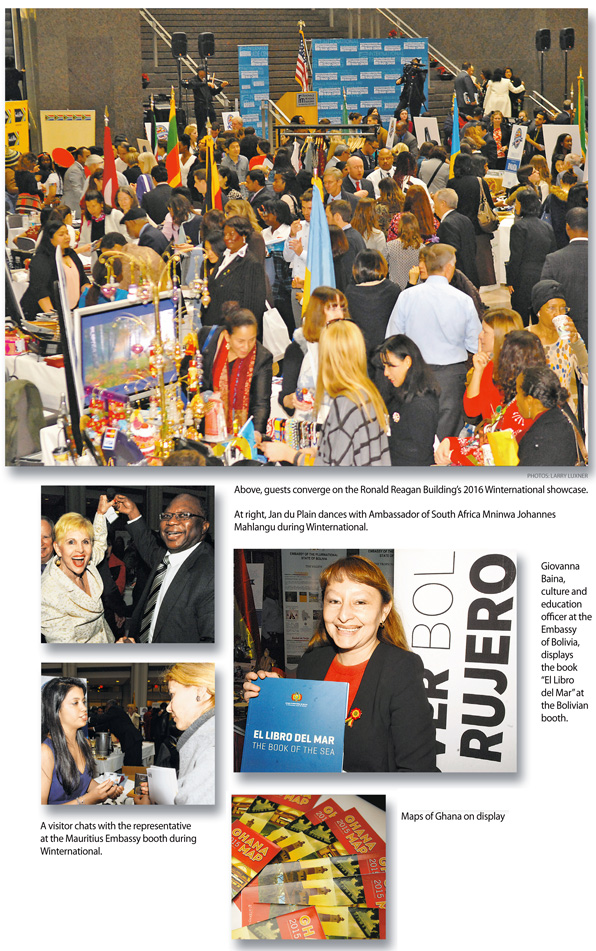 The fourth annual Winternational Embassy Showcase offered all that and more.

The Dec. 9 event took place at the Ronald Reagan Building and International Trade Center (RRB/ITC), which at 3.1 million square feet ranks as the largest federal building in Washington. It attracted 2,500 visitors for a colorful midday celebration of culture, travel and tourism, organized by Trade Center Management Associates (TCMA).

As Azerbaijani-born violinist Rafael Javadov entertained the crowds with his classical, jazz and klezmer music,people browsed the exhibitions organized and staffed by a record 34 embassies including the African Union; the 28-member European Union; and the 22-member League of Arab States.

“It’s wonderful for the African Union to be a part of this and show off our culture, music, art and books,” said Seraphine Manirambona, policy officer at the AU Mission.

Added Marcelo Magnou Perez, cultural attaché at the Uruguayan Embassy: “It’s great to talk to so many people from so many different walks of life. We’ve made a lot of new friends, not only from this area but from all over the United States.”

Andrew Gelfuso, vice president of global business development at RRB/ITC, kicked off the event — co-sponsored by a number of local entities including The Washington Diplomat — with a short speech.

“Today, we have convened a dynamic mix from the Washington, D.C., and diplomatic communities for a one-of-a-kind event,” said Gelfuso. “I’d like to thank each and every embassy for sharing your cultural heritage and traditions with us here today. Each of us will take home knowledge and memories, and I hope you’ll take advantage of this wonderful opportunity to bring home gifts for your loved ones during this holiday season.”

The Ronald Reagan Building and International Trade Center opened in 1998 as the first and only federal building dedicated to both government and private use. Mandated by Congress to bring together the country’s best public and private resources to create a national forum for the advancement of trade, TCMA was selected as the building’s exclusive manager in support of this mission.

At Winternational, participants happily wandered around, munching on Asian delights, drinking tea and snapping up souvenirs amidst a dizzying cacophony of languages.

“We have to have more events like this. It’s going to connect the whole world together, especially these days, when we have such a hard time with prejudice,” said Shahin Mafi, founder of the Azar Foundation for Children of the World. “Such a thing will help everybody, not only Americans.”

Mohammad Ziauddin, the ambassador of Bangladesh, which has the world’s fourth-largest Muslim population, called Winternational “a replica of a global village.” 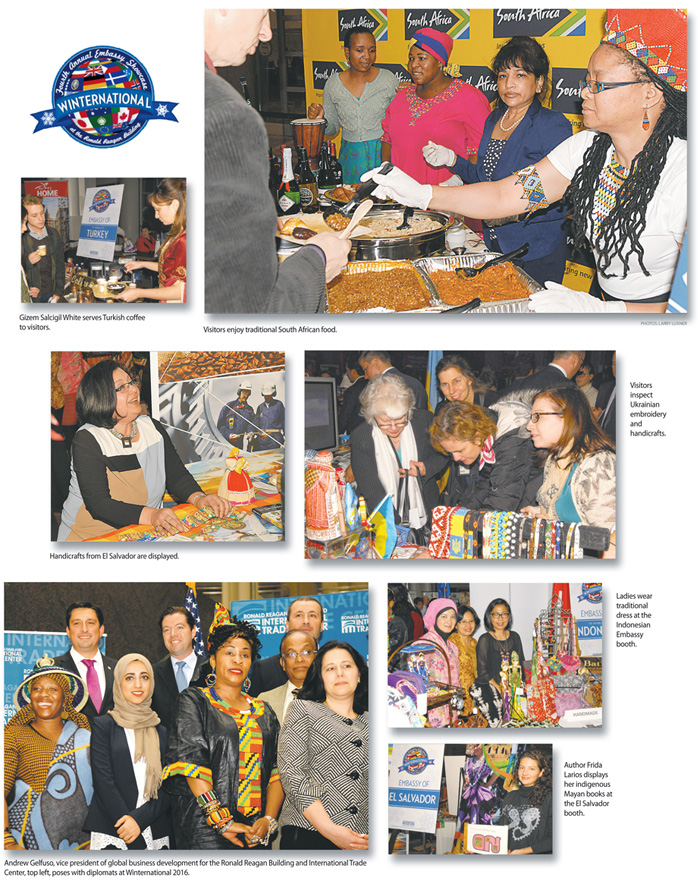 “You have people from all over the world — all nationalities, races and religions — and they’re mixing so well, intermingling, interacting, eating each other’s food and learning each other’s cultures,” he said. “This is the world we want.”

That such an event takes place every year in the nation’s capital — home to 184 embassies at last count — is only fitting, said Myron Belkind, former president of the National Press Club.

“Washington is the world’s leading international city. Paris has the Eiffel Tower; London has Buckingham Palace,” he noted. “But Washington has a vibrant international community, and today epitomizes that.”

A variety of nations ranging from Australia to Uzbekistan see the festival as a once-in-a-year chance to publicize their unique cultural attributes.

“We are about to celebrate our 50th anniversary of independence in 2016, so we’re pulling out all the stops,” said David John Newman, ambassador of Botswana, which is considered one of Africa’s most prosperous, well-managed countries.

Said fellow Ambassador Román Macaya of Costa Rica: “It’s our second time at Winternational, and we’ll certainly be here every year. It’s something we don’t miss and it’s a great opportunity to showcase what Costa Rica is all about.”

One of the smallest and most remote countries exhibiting at this year’s festival was Fiji, a South Pacific archipelago of 880,000 people spread across 300 islands.

“Just looking around the room and looking at the vibrancy of the different nationalities here, it’s the richness of the world you’ve been able to capture here,” said Fiji’s ambassador, Naivakarurubalavu Solo Mara, as his consular officer, Clarita Phillips, offered visitors coconut pieces, banana chips and, of course, bottles of natural artesian Fiji water. 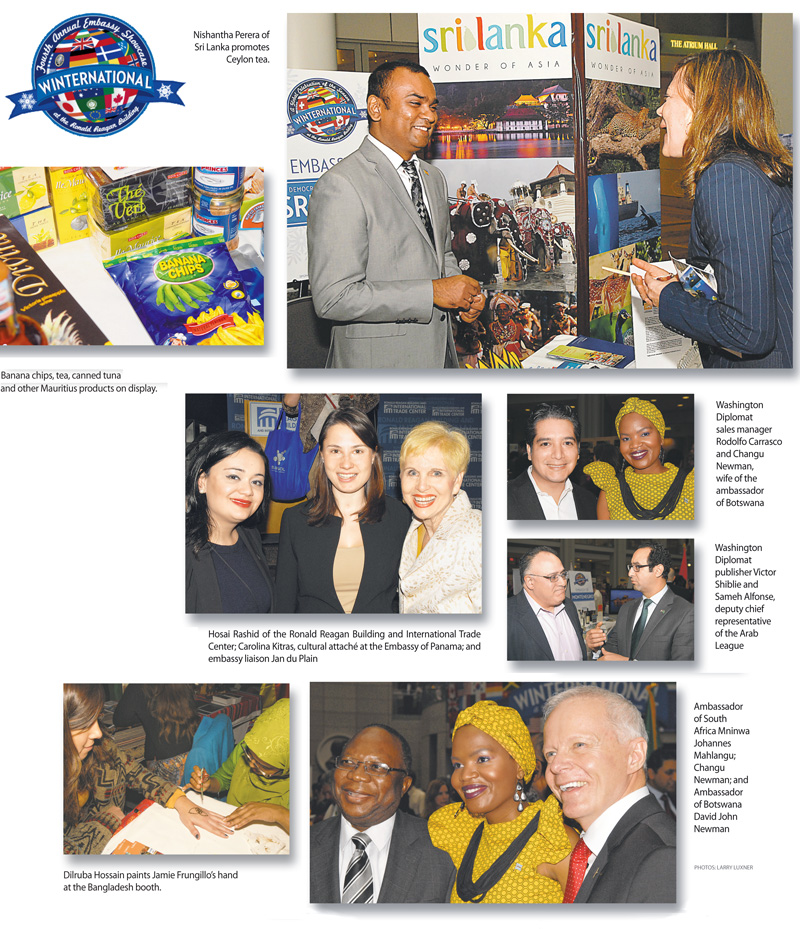 John Drew is chief executive of TCMA, the group that manages the Ronald Reagan Building through a public-private partnership with the General Services Administration. The TCMA team at RRB/ITC provides a central forum for building connections, fostering diplomacy and advancing global commerce by offering a rich mix of signature events such as high-profile economic summits, conferences, business matchmaking seminars and cultural programs like Winternational.

“The turnout is beyond belief, from both the embassies and the local community,” Drew said as the Dec. 9 event was wrapping up. “We could not be more pleased with how things have turned out today.”

Stay tuned for the next Winternational festival, set for Dec. 9, 2016.